We will, we will Block you…. 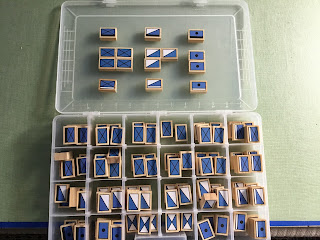 Army Blue from the block collection with the direct types shown to good effect on the inside of the lid.

A curious thing has occurred over the course of my temporary back affliction. As I have been reluctant to do anything that involves carrying or moving with any degree of acrobatic contortion - entry to the man cave involves an ascending right hand turn with a twist, imagine the start of an Immelmann turn that flattens out at the highest point - I have been contenting myself with catching up on my reading.

This has proven to be a rewarding but frustrating experience. As I have been reading about various periods of military history - no details as yet, it will spoil the surprise - my natural inclination is think about how to game them. This will then mean a couple of hours of researching figures ranges, thinking about organisation, looking for additional books and all the various other assorted tasks one associates with a new project. These days I tend to see reason for more often before ‘pulling the trigger’ so aside from the time spent usually little is lost. 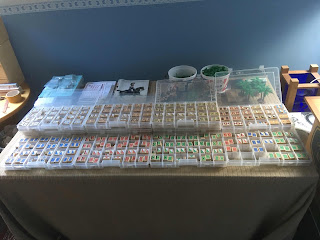 A picture from a while ago of the block army collection in its entirety - there was an awful lot of ‘not quite’ Jenga blocks involved in the production of this lot!

Enter stage third left the humongous collection of block based armies I have. You may recall that these were originally intended to be used to experiment with rules and periods before committing to a figure based set up. They have served me really well in the past and I am pleased that I got them to where they are. I want to take them further though.

It does not bother me using blocks over figures in conjunction with 3D terrain and so I am thinking that what free time I have now that I am back at work may be better served by adding to the blocks rather than replacing them wholesale with figures. 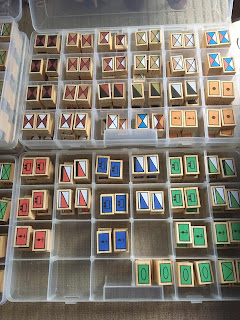 The blocks in the top half of the picture I use for tribal types whilst below you can see some of the 20th century options. These are the types I am address in a far more aesthetically pleasing way - but not with figures for the moment!

One of the ideas I am thinking about involves the use of figures for an army command base - almost a mini diorama style affair with perhaps the C in C himself and an ADC/staff officer type. Block units of infantry and cavalry will benefit from a standard of some kind - I have experimented with this previously but have yet to get it how I would like. Finally, WW2 would see the use of MDF tokens of some kind to differentiate weapon types etc.

If it all sounds very abstract and stylised then that is exactly what it is - and I have no problem with it being so. I have invested too much time and effort in producing the block armies to give them up so I plan to take them to the next level and if this means that figure based solutions are pushed down the batting order I can live with it.

The ideas I am pondering at present would also enable me to explore the ancient/medieval period as well so I will report any progress as and when I make any.

As a confirmed block gamer, the shots of your lovely wooden blocks brings joy to my heart. Really I should get mine out onto the table once again but frankly it's too hot!

Many thanks old chap - much appreciated! My blocks are much simpler looking than the traditional Kriegsspiel types but they are recognisable for what they should represent and anyone that has looked at a military history book should have little difficulty working out what they are.

I tend to fight with them on a 3D terrain set up but using high quality maps would not be a problem. the only issues I have is that none of the blocks have any indication of which way they are facing and this is something that I want to address if I want to use them off a grid.

The collection I have is fine up to a point but I want to expand their usage and so am pursuing a few ideas that should give them a whole new lease of life.

I had some truly memorable games with them and fully intend on doing so going forwards - hopefully when it is a little cooler!

I sense a cunning plan forming .. but what no Dreadnoughts?

There is always a cunning plan or two - occasionally involving dreadnoughts...:-)