“The sentries report Zulus to the southwest….” 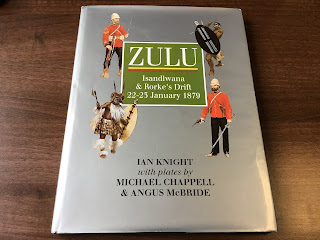 Yet another title from my collection that had mysteriously vanished but has now happily been reacquired! Limited to the early part of the war but really good all the same with some wonderful artwork.

I am still flirting with the idea of some Portable Wargame style forces for the Colonial period based on the contents of what is in the War in the Age of Imperialism board game. If you recall the standard infantry figures is 20mm tall and is based on a standing firing British infantryman (therefore usable for a number of types) so my rather vague plan was to acquire some boxes of figures from Hat to complete the project. That is still a viable option although I have been looking at other scales as well.

No matter - it is the book that is the thing.

My Zulu war library is very small and to be honest is probably more in tune with the film Zulu than the whole conflict. The period certainly one of those that I come back to repeatedly and from a gaming perspective the asymmetrical nature of the opposing sides makes for all manner of tactical challenges. In its crudest form one could liken the war to the old arcade game of Space Invaders - a relentless and numerically superior foe against a smaller number of far better equipped soldiery. One could also extend the analogy to the film Aliens.

I have fought a couple of games set in the Zulu war using my block armies and they were great fun. Essentially if the Zulus can get into contact then they can cause all manner of problems whereas the British need to be fighting them at arm's length so that their firepower can be used to its best advantage.

I was delighted to reacquire the above book and whilst there are a couple of other titles that would add to the collection I am in no hurry. What I am confident in though, is that I have the rules and the background information necessary to organise a great set up for this most iconic of Colonial campaigns.

All I need to do is to decide how!

I would also recommend any of the books on the subject by Lieutenant Colonel Mike Snook.

Nice looking book matey…must look out for a copy.

It is a very nice book for sure and I have my eye on a couple of Lt. Col. Snook's titles for sure.

There is another Colonial title in the same series on the NW Frontier which I would be keen to acquire at some point as well.

It is a lovely book for sure although focussed on the events of the initial invasion. There are some lovely colour plates therein!