Back in the Ship Building Business 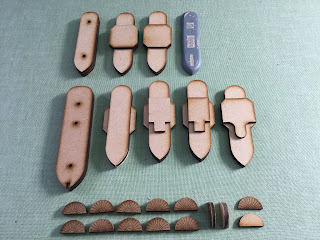 Where we are so far. Six sets of paddle boxes (including the two parts that make one up for reference) and an old friend that is being repurposed - not to mention changing sides! My original model of the C.S.S. Manassas is being reinvented as the U.S.S. Keokuk

At long last my back has recovered to the point that I am able to enter the man cave! This will mean that I can at last tackle a list of overdue bits and pieces that have been playing on my conscience for weeks!

The most significant of these is of course the resumption of work on the remaining ten ships for the ACW project. I say remaining with my tongue firmly in cheek as I shall be adding some generic looking transport/merchant types in due course - nor specifically for the ACW - but this will be very much as standalone project as and when I get to it. The eagle eyed amongst you will no doubt have noticed that there are only nine hulls in the picture - this is simply because I have yet to start on what would have been the final model. And guess what? Even at this late stage there will be a slight overspill in that I plan to add a further two models making 62 in all….

Of the batch you see above the key element are the paddle boxes. These were prepared for me by Warbases and are one inch in diameter. They are 2mm thick so have a backing piece that is the same size but 3mm think meaning that the overall width is 5mm. Strictly speaking this is probably a little on the narrow side but as all the models will have a fair amount of mid deck clutter it was important that there was sufficient space. Again, these are not even remotely to any kind of scale!

The ‘sun ray’ effect has been etched in the MDF but as a precaution I plan to deepen the grooves prior to painting so that they will be easier to colour. I may use the old ‘paint the piece and ink in the deepened lines afterwards wiping away any excess as required’ technique but we shall see. Four of the paddle models will feature ‘walking beams’ - one n fact will have two such assemblies.

Aside from the ship building I am also able to at last get some parcels packed for shipping - apologies once again for the delay - as well as tackling the library.

On a more serious note it has proven to be a welcome distraction being back in my retreat as we have a number of domestic health issues to deal with, both at home and abroad.

These are looking great! The sunray effect looks fine, although I can see why etching it deeper would be a good thing to do.

Thank you old chap! I am sure you will have worked out who some of these are destined to be! The etching looks fine but by the time the MDF has been sealed, undercoated and painted there is the danger they will disappear so deepening them - I have a bradawl that is ideal for this - is definitely a good idea.

It is good to finally be working on hem again after my enforced break!

Good to see you able to get back to some ship building and fingers crossed that all will be well on the health front.

Thank you old chap! Hopefully we will have some positive news on both the home and away health issues soon.

I have to say that it certainly felt good to be able to get some modelling time in, albeit briefly!

Good to see you’re back on track…you’ve got some catching up to do sir!

I certainly have! It was only an hour or so but I really enjoyed being able to stick some bits together and do some filing!

The only problem is that the final ten have turned into twelve….

It’s nice to see that the shipyards are open again David.
I’ve always believed that making and painting toy soldiers is the best kind of medicine…

I am delighted to be back in the saddle once again - as well as being able to start packing bits and pieces up for their onward journey!

You are absolutely right - I only spent a short while in the man cave but the value I accrued was certainly far beyond my expectations!