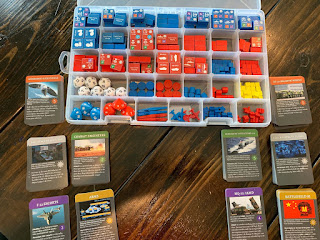 How to fight a war like a modern US Marine - I must confess it had me when I saw all those blocks....

I must confess to not being in any way an authority on the 'professional' wargame as used today despite selected items being available as part of John Curry's History of Wargame Project. Similarly wargaming the 'modern' period (in this case anything from 1965 onwards) is something that I have seldom tackled since the early 1980s. Back then it was very much the 'Cold War turned Hot' type of set up inspired by such works as Red Storm Rising by Tom Clancy. Add to that Vietnam and the occasional foray into the Arab Israeli wars and you can see where much of my early inspiration came from.

These days I would be more likely to tackle modern gaming at a skirmish level rather than using great phalanxes of track to track Soviet tanks to batter the Western capitalists into submission!

Whilst undertaking one of several work related daily trawls of LinkedIn I came across a piece written by a former US Marine and wargamer turned research analyst - Sebastian Bae - about a professional level wargame he had developed for training purposes for the USMC. The component pieces for the game you see in the picture above. How good does that look? Sadly it is not available other than in the US and only for professional use due to being fairly limited in respect of production. I have asked if the rules and bits and pieces are available via a 'print and play' option as this looks really interesting.

Modern warfare is a highly complex affair in respect of the assets that are available and making the most effective use of them so seeing something like the above really gives an insight into how are and may be fought in the future.

Focus David….focus! You’re all over the place at the moment man. Cowboys to Marine Corp…and I thought I had eclectic tastes lol…

The only thing I am focussing on at present is the ACW collection with everything else being more like an elongated wish list….

I may have to watch Heartbreak Ridge again though - purely for research reasons of course….

And so, Kriegspiel comes full circle and back to where it started ... A training method for professional soldiers (not that they have ever stopped using wargames to train staff officers of course..!) An interesting discovery for sure...who would have ever guessed LinkedIn could provide any useful information! 😄

I must confess Linkedin surprised me as well! The game looks really interesting and not only I am interested in the subject matter but also the components - anything that features blocks will get my vote!

I am certainly going to take a look at the professional wargame material available from John Curry.