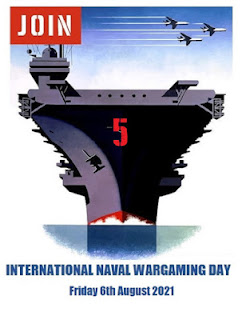 It's that time again!

Today is the International Naval Wargames Day whereby gamers of a nautical persuasion are invited to celebrate all things naval wargames related by fighting a naval battle. It can be of any period or scale. I would have dearly liked to have taken an active part in this but sadly I will not be able to get a game in today due to work. However, I am able to post on a naval subject so at least the day has been observed in one form if not the right one!

As part of the long distance downsizing of my collection I have of course looked at the naval dimension. As you know I have a long history with naval games of various sorts and in various scales. My most recent nautical adventure has been of course the ACW which I have enjoyed immensely and is now one of my naval 'staples' so to speak. I have found the whole ironclad and pre dreadnought era to be an absolutely fascinating period to explore and I know that I will get a lot of pleasure from it going forwards. To a lesser extent the same applies to the Great War period although these days I tend to prefer lower level actions compared to the great Jutland style games of the past. Cruiser/Raider style warfare will be the gaming of choice going forwards although sneaking in the odd battle squadron has a certain whimsical charm! As far as models go for the Great War I certainly plan to scratch build a few types but probably nothing larger than a pre dreadnought battleship - mainly as my building technique would not stretch to the complexity of detail required. I have a vast amount of 1:3000th painted model for the British and Germans courtesy of the late Alan Cook. The collection needs completing as there are some key elements missing - there is a shortage of destroyers as well as, horror of horrors, no SMS Seydlitz! This collection will suit for the larger actions involving dreadnoughts if required.

WW2 naval is another area of interest and I am keen to explore the surface phase of the Battle of the Atlantic. The numbers involved are small and so eminently gameable, even allowing for the complexity of the air element. I have a hankering to tackle submarines and convoys etc (a grid based option works well here) at some point but this is well down the list.

I like the idea of an age of sail style set up - anything from the time of the Spanish Armada to the Napoleonic Wars - although again it would be a low level in terms of the numbers involved (this is a bit of a theme for me). Pirate ships are very much under consideration - do I build them myself or do I buy commercially available models?

If I learned anything from the ACW building fest it is that I really enjoy building simple looking model warships so as this seems to scratch a creative and artistic urge I am keen to carry on doing so!

Moving back in time I have further naval aspirations in respect of the ancient and medieval periods so galleys and cogs may be a thing at some point.

Overall I am happy with what I am seeing as my naval sweet spots for the foreseeable future - there is sufficient variety even for my butterfly like mind - especially as the number of models for the most part is quite modest. For example, once I have the ACW project finished the set up for Lake Tanganyika/East Africa will only need a couple of dozen models or so. Some of the other ideas I have will need even less!