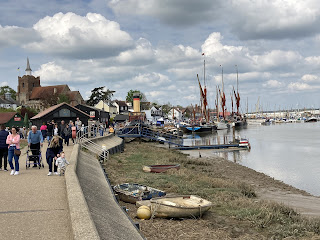 Maldon viewed from the promenade

It was a busy bank holiday weekend for a variety of reasons - mostly around shopping, the garden and paying a visit to Maldon to see some friends. We also managed to sneak in a cheeky takeaway so it was a pretty good weekend all said and done.

SWMBO had been making noises about the garden although given her current largely wheelchair bound status it fell on the shoulders of yours truly to provide the requisite manual labour (I usually only tackle the mowing and seasonal cutting back of the tree in the garden) whilst she directed operations. The hanging baskets are now, well, hanging, and are complete with trailing lobelia in a variety of colours. They always look good when they are in bloom and it gave SWMBO a boost getting it done - she did the potting and I did the hanging! We also tidied up the various herbs we have - no, not THAT herb! - so everything looks fit for the summer.

I was supposed to go to Navwar on Saturday to collect some bits and pieces but will have to do this next week instead - time has really not been kind to me this weekend - and for the record there is noting hugely enigmatic about the visit! I am merely picking up a few bits and pieces for me and a friend…. 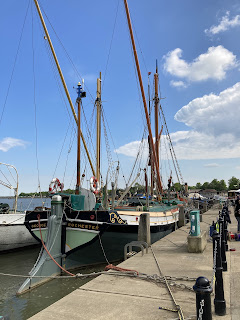 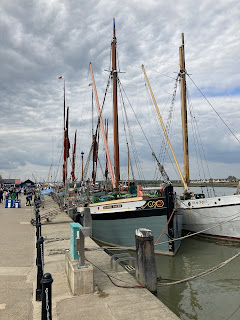 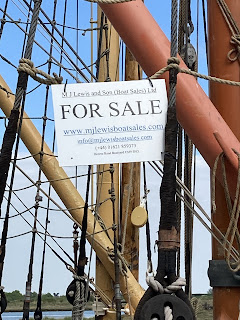 ….the ‘For Sale’ sign. Try as I might I could neither negotiate the price down nor could I see any fitting points for artillery!

Maldon on bank holiday Monday in the sun was busy but luckily where we were situated was in the large Promenade Park along by the Blackwater Estuary. There lots of Thames sailing barges in evidence - including one that had been newly refurbished and was for sale. £325,000 was the asking price and she looked lovely for sure. There are cruises organised during the summer months from Maldon which would be something to look forward to in due course. 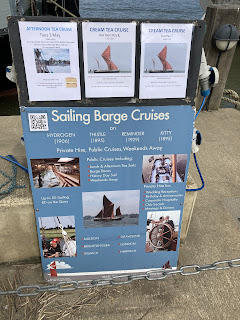 Not quite the Mediterranean or the Caribbean but good fun all the same methinks! 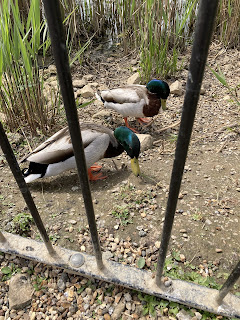 There were also rather a lot of these handsome chaps present in the Promenade Park Pond - you can even feed them by hand, which I did!

On the gaming front I have spent numerous odd moments finally typing up the Portable Ironclad Wargame rules and I can now say that (at last!) they are finished! I shall be sending some copies out for testing purposes to those that are in the know so for now that part of the project is at a convenient break meaning that I can (at last) get back to some boatbuilding!

A very busy weekend then Dave!

It certainly was - I needed to get back to work for a rest!

That sounds like a very pleasant weekend, but then I love gardening! Great that Laurel was able to assist with the planting and for both of you to get away to see friends. Not a part of the country I've been too (along with loads of others) but it does seem rather nice.

It was busy in a good way but pretty tiring with it! Laurel is the boss in the garden - it is very much her domain as my knowledge of anything green is abysmal!

Maldon is lovely and it was a very pleasant way to spend a bank holiday. I like being near water and this was a real treat seeing all the Thames sailing barges up close.