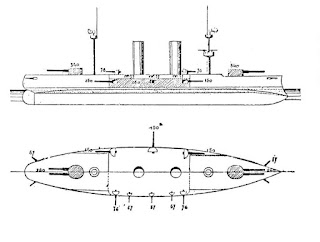 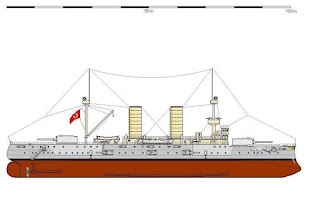 A rather smart artist’s impression of the completed ship
Models

I was able to get some time in the man cave and so work on five of the remaining ACW ships has resumed. There are twelve in total, three of which are masted types. Currently under construction are a couple of Union double enders, a river monitor and a pair of Confederate gunboats. These have been under construction for what seems like an age - certainly since before Laurel went into hospital - so it was good to get some work in on them once again. I was even able to get some work in on the Turkish ironclad Messudieh - the sister ship to H.M.S. Superb. There are a couple of other Turkish ironclads to be added and then it will be on with the Russians.

On the subject of the Turks the pictures at the top of the post are of the laid down but never completed pre dreadnought Abdul Kadir. It is quite a simple design and was described as being the pre dreadnought equivalent of the Spanish Espana class dreadnought - small and undergunned compared to contemporaries but more than sufficient to keep their neighbours (primarily the Greeks) honest. I think it is a really smart looking design which may well find itself being used when I get around to building the pre dreadnoughts.

Firing Arcs
My Portable Ironclad Wargame rules (including the 3 x 3 modifications) are currently with my very own dynamic duo of play testers (I am convinced they are probably regretting volunteering to help given my peculiar and somewhat anarchic writing style!) and they have already given me some very valuable feedback on certain elements of the rules. One key element was missing from the initial draft and as a result of this oversight on my part has delayed things a tad - profuse apologies to both of these worthies - I am of course referring to the firing arc diagram.
I will be perfectly honest about this, my graphics skills are very modest and so I was really not looking forward to drafting these - orthogonally would have been fine (Excel is my friend!) but diagonally would have been beyond me at this stage. I was stumped at how to do this and at one point was considering drafting the arcs by hand and ten taking pictures of them! Luckily common sense prevailed and so I opted to set up a table with a model on it and mark out the arcs using some card. Crude but effective for the task in hand and with the option to get something rather more diagrammatically in place going forwards.
Of course, I did forget the turret option but given that that is, for the most part, roundabout 360 degrees (did you see what I did there?), it did not seem like a serious omission. 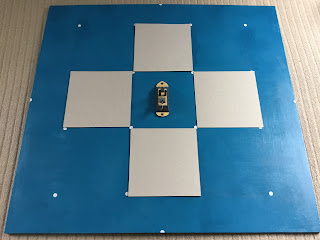 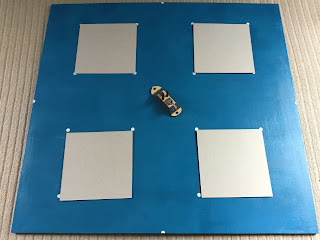 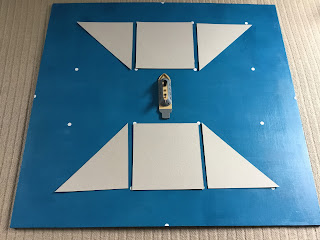 Forward Wide (FW) and Aft Wide (AW) with the C.S.S. Virginia in the centre. 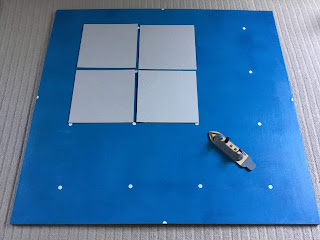 Forward Wide (FW) on the diagonal…. 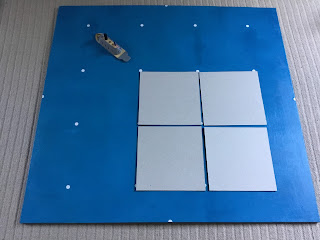 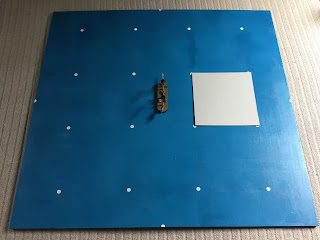 Centre line pivot guns can fire either port or starboard - in this case starboard, with a 90 Day Gunboat illustrating this… 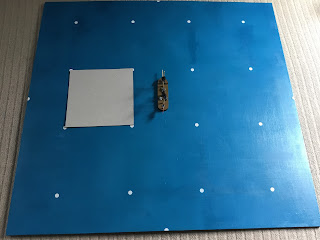 ….and on the port beam 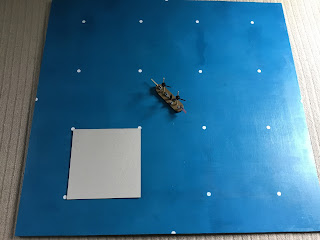 Diagonally on the port beam and…. 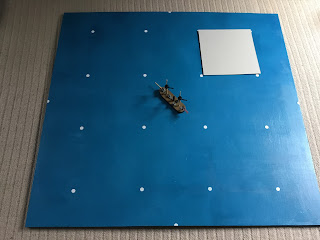 ….and on the starboard
Bright Ideas

Whilst the above is a simple and short term solution and certainly needs to be tidied up slightly, it seems to hit the spot but does raise a few rules issues around firing and by extension, damage. I need to give this some thought before changing anything though. 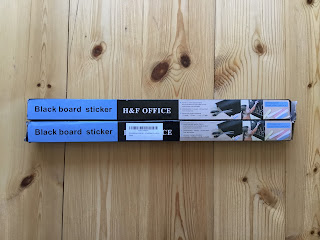 Two rolls of self adhesive vinyl coloured plain black covering a total area of 200cm by 90cm - whatever could this be for?
For the first time in an age SWMBO, my daughter and I ventured out to a new boot sale, set in a Park and Ride facility just off the A12, some 15 minutes from home. It was nicely spaced out but the selection of bits and pieces on offer was not hugely inspiring. My daughter got a few bits and pieces and I was able to pick up the two boxes you see above. They each contain a roll of black self adhesive vinyl sized at 45cm by 200cm and designed for use as a blackboard covering. They are plain black and needless to say there is a cunning side hustle afoot….
By the way the cost for these two packs was the princely sum of £1.50.
I think the expression you are looking for is something along the lines of “Back of the Net!”

David -
I've let things slide a bit lately, but did find an off cut from a kitchen bench repair from about 20-odd years back. This I've marked up as the 3x3 naval board - slightly modified from your design. I'll do a posting on this shortly.

I mention this as I gather you - or someone - has had the notion of 'pre-dreadnought' naval actions on this type of board. Has anyone codified a rule set for this yet - or is it a non goer? I've set the thing up for a 'first pass' scenario - a flotilla of 4 torpedo boats attacking a small convoy - 1 single MS escorted by a lone light cruiser.

I would love too see your naval board so will look forward to the blog post.

To my knowledge there is not a set of rule for the pre dreadnought period as yet and to be honest my own thoughts have only gotten as far as seeing how I can tweak the ACW/Ironclads system (and before you ask, yes it could work!).

The action you describe would seem to be fair game for sure! I was kind of thinking about commerce raiders and similar - even up to the Great War as long one does not start bringing dreadnoughts into the fray.

I have a way to go before I can get to the pre dread in earnest but I have made a start on looking at the MDF pieces I will need to get Warbases to cut for me.