This evening I fought a Zoom based play test game using my Portable Ironclad Wargame rules and based on the second day of the famous Battle of Hampton Roads. We (agent X and myself) used the 3 x 3 version of the rules and aside from a couple of points arising it all went rather well. This will not be a full blow by blow account of the game so I will instead let the pictures do the talking for the most part. Unfortunately taking pictures in the man cave at night and under artificial light is a real problem in that shadows etc are very noticeable. 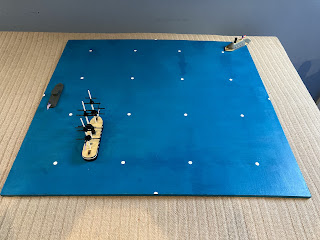 Initial positions. The U.S.S. Minnesota is stuck firmly aground although still able to fire. The C.S.S. Virginia moved first. 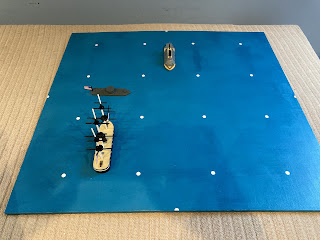 Surprise! The U.S.S. Monitor emerges from behind the stranded frigate and prepares to engage the Rebel warship. Firing sees the U.S.S. Monitor inflicting 3 points of damage on the Rebel ironclad (this should have triggered a critical hit but in the heat of the action was overlooked…) whilst the Confederate warship fired at the stranded Union frigate to no effect. 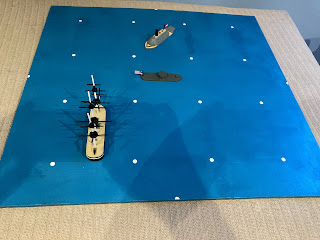 Deciding to focus on the U.S.S. Minnesota the Rebel ironclad made straight for her whilst the U.S.S. Monitor, mindful of the potential effect of the Rebel ram, maintained a discreet distance. 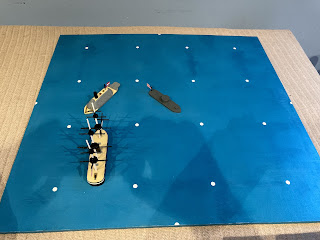 The two ironclads continued to blast away at one another with little effect but by dint of a careful manoeuvre the Rebel warship was now positioned off the bow of the stranded Union frigate at close range. 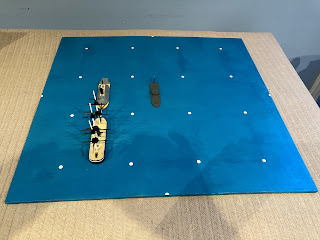 The C.S.S. Virginia manoeuvred until she was virtually under the bowsprit of the Union frigate and at last she began to score hits against her. Meanwhile the U.S.S. Monitor blazed away with little obvious effect on the Confederate warship. 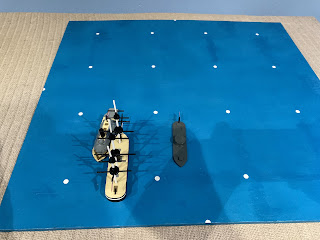 Despite the risk of running aground the Rebel captain decided to risk ramming the Union frigate. The Confederate warship closed in on the U.S.S. Minnesota only to hear an ominous grinding noise as the ship shuddered to a halt. She had run aground! Worse as to follow as with the groan of timbers and the squeal of overstressed metal she heeled over meaning that her guns could not be brought to fire! Seeing the enemy warship in obvious distress the U.S.S. Monitor commenced pouring shot after shot into the grounded rebel ship - in short order she succumbed to the overwhelming weight of Union gunfire. The C.S.S. Virginia was battered into oblivion.

It was a fun game to play and I was delighted at how the overall system worked against a line opponent! A few points requiring some thought and clarification arose but nothing major. Mention should be made of the freakish nature of the Union initiative rolls - they won every one - as well as the generally poor standard of Confederate gunnery.

I am well satisfied that the gunnery system works and having opposed dice rolls really adds to the fun factor. A couple of things were missed but this did not present a great problem overall. I need to really clarify a few things as follows:

All in all it was a great way to spend and evening and my sincere thanks to Agent X for his efforts thus far and his continued ongoing support. Next time I will let him choose the dice as well….

A fine looking game, and even though it was a bit one sided it still looks like fun.

Interesting little action , I do like your table set up , very nice indeed .

A nice little action there David and the title made me smile too:).

It was a game that was more of a test than anything else but the C.S.S. Virginia was very unlucky with her dice rolling! I was pleased that we had a couple of rounds of close range gunfire that made a lot of noise but very little else! One could almost imagine the shot and shell bouncing of the armour!

The final attempted ram in shallow water against a grounded ship was very much a try out. It failed and with the Virginia heeling over as a result of running aground it was only a matter of time before she got royally battered.

Lots of positives from the rules though!

Many thanks old chap! I desperately need a larger grid though…

It was great fun to do and the rules held up well. For sure there were a few issues but these were mostly known. It is moving along nicely!

A very interesting battle, and the rules seem to work well on the 3 x 3 grid.

I look forward to reading more about your future play tests.

The period is well suited to the 3 x 3 format and overall I am well satisfied with how the rules stand up against a live opponent. There are still some areas that need fine tuning but overall it is looking positive and much progress has been made.

For the next test I want to use a larger playing area and more ships but that will be for another day.

Thank you kindly sir! In truth it was a bit of a quick knockabout - mainly as a test of the rules - but it was fun all the same.

There will be more to come for sure!

Ha ha! Hampton Caught. I love innuendo. My wife doesn't quite understand what it means, so asked me for an example, so I gave.....well you know ;-)

Just a thought, maybe the rules should be called Carry On Up the Mississippi - certainly the game lived up to it!

Innuendo? Isn’t that where you hang curtains?….

I am pretty sure I saw the seven volumes being offered at a discount from one of the military book sellers - can’t remember which - so I am sure a little trawl might point you at them!