I have to say that I have taken a vicarious pleasure in reading about Partizan last weekend - it is not a show I have been to but would like to do at some point -  although by comparison my own weekend was rather more sedate! 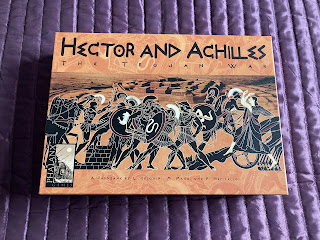 Small and handy to have - no plans to tackle the period using figures….(not yet anyway….) 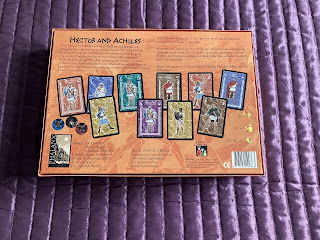 Samples of the troop and character cards

Laurel, Holly and I headed out to a boot sale on Sunday and it was quite a successful outing. We all managed to get some bits and pieces - mine you can see in the pictures - and best of all was whole pile of cheap fruit - a tray of twelve mangoes, four large punnets of raspberries and two of blueberries for five pounds - so we are now all feeling rather virtuous in a ‘five a day’ kind of way!

The first of the purchases I made is a card based game inspired by the Trojan War. It is largely a game of knowing when to influence fate and deploying your heroes in a timely way to support your troop cards. Simple and handy to have as well as fast playing. I was so inspired that I may well have to watch Troy again, maybe even tap into Homer once again! Useful buildings to have around for the Green islands or, in the case of the right hand one, even the Middle East

The buildings are usually sold as cheap holiday souvenirs among the Greek islands - I already have a number of these - and so when I saw the four of these for a silly price I thought ‘well why not?’ OK so there are more churches than I would usually need but the small flat roofed house is handy. Indeed, I have used several of these buildings in a number of my games and they certainly look the part.

Way back in 1988 I damaged my left ankle. It was not a dramatic event as such - no skiing or sky diving accident - as all I did was to slip down two stairs and roll my foot so that it was at right angles to where it should have been. Miraculously I had not broken it but I had wrecked pretty much every ligament around the ankle. I remember the bruising was pretty spectacular and ran from the line of my toes to the back of my knee. Anyways, after some eighteen months being in and out of plaster it was more or less about as good as it was going to get. Since that time (and after extensive physiotherapy) it has given me endless grief and the the consultant I saw told me that in later life I would probably get arthritis in it and that surgery to fuse the ankle may be the only solution. It has not gotten that bad yet but it has really deteriorated over the last couple of years or so. It has now also impacted on my knee and hip. Later life is here so it seems!

A few weeks ago I had X-rays on my ankle, knee and hip and last Friday I visited the GP to go over the results. I have been referred to an orthopaedic surgeon as I now have a fairly substantial bone spur bang in the middle of the joint. Luckily it is pretty straightforward to sort out although naturally as a non life threatening condition I am fully expecting a bit of a wait. The one big plus is that the GP is of the opinion that once it has been ‘rebored’ (his expression, not mine!) my knee and hip will notice an immediate effect - the effect of the ankle injury carries up through the leg apparently over a period of time.

For the time being then, I will stick to my regime of only spending half a day at any given show - the rest of the time I shall spend with my leg elevated with a mug of tea and a good book (like that is going to happen!).

Hi....Later life catches up to all of us sooner or later. The good news is that you have what sounds like a good prognosis , the bad news is that you are for sure in for a long wait !!!!! However sitting with a good book sounds a great way to spend that waiting time. Regards.

In truth I have been putting up with it for so long now that a wait at this point is not the end of the world. At least I am ‘in the system’ so it will be sorted eventually though.

Funnily enough I have been conscious that recently my reading has been reduced somewhat by circumstances so this is something I need to address!