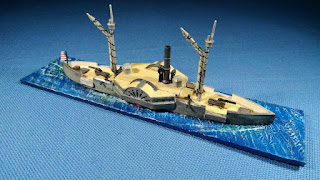 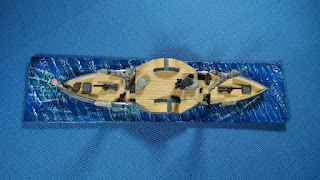 The top down view shows the symmetrical outline of the hull and the paddle boxes centrally fixed. Sadly my pair of these ships will not look very much the above….

Despite the ‘disastrous heat’ (a prize will be given if someone can name the actor and the film that the phrase in commas came from - please don’t expect any fancy!) I was able to get into the man cave and crack on with some painting and modelling.

The modelling was limited to organising the fighting tops, masts and spars for the frigate and pair of sloops I need to build and sorting out the funnels for four of the five models currently being painted. I should point out that this part of the build has been rather haphazard as opposed to the well organised earlier efforts. It has caused me a couple of issues but to be honest I will live with them as neither are ‘deal breakers’.

To begin with two of the Confederate gunboats I am building have been constructed slightly out of synch. Each model has a white hull top strip that I would normally paint before assembly. For example, a hull with four layers of MDF would have the top layer edged white with the other three layers in black or whatever. Once painted the white strip would then be fixed to the lower hull. This approach ensures a razor sharp line. Sadly on this occasion I had assembled the entire hull, including paddle boxes meaning that I would need to paint the stripe freehand. Out came my trusty and seemingly inexhaustible roll of yellow Tamiya masking tape which was duly applied to the two gunboats. It worked a treat and so now the hulls look suitably smart and business like.

I also planned to do the same on two completed models mentioned as being refurbished on my previous post - a pair of sloops, one for each side. Again te masking tape came into play and it worked really well. All I need to do to the pair of sloops is to varnish the new stripe and they are then both ready for action.

The building issue concerns the rather nice looking model you see at the start of this post. As a ‘double ender’ this class of vessel was pretty manoeuvrable due to being able to be conned from either bow or stern by reversing the engines - very handy in confined spaces or if needing to make a quick getaway. The bow and the stern are the same shape and the paddle wheels and associated machinery were centrally located. All this is obvious from the numerous pictures of this vessel and other like it.

Obvious to all that is, except me….

I have two double enders under construction that are simply wrong. To start with I used a standard hull template which is, to put it unscientifically, pointed at one end and curved at the other. I also have the paddle boxes slightly off centre and more to the aft of the vessel. In short they are single double enders….

I was a little disappointed by this but given how approximate most of the collection is to any perceived reality I can live with it - when they are finished they will look the part anyway. In a game situation all I need to do will be to turn the model 180 degrees if it changes its direction to take advantage of its double ended configuration. After all, at least the pointed end will show the direction it is currently travelling in…

(Note to self: Look a little more closely at the pictures next time….)

Could you cut them in half and swap the pieces to get one pointy double-ender and a rounder double-ender?

I did think about shaping the stern to match the bow but that would not address the fact that the paddle boxes are not in the centre. For that to work I would then need to reshape the bow section as well so that by reducing the length it would in effect centre the paddle boxes.

Cutting MDF never ends well especially as this would need cutting across what is the strongest part of the join although you have given me an idea….