All Square and Everything to play for…. 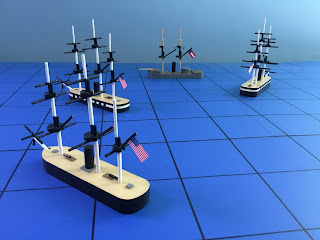 There is a final piece of the puzzle to add to the ACW/Ironclad rules I have been developing which should see them finished or at least at the final draft stage. It is not a huge change per se but it will require rewriting a substantial amount of text which of course takes time. No matter - the end result will be worth it and more importantly it means that I would have been honest with myself about how I wanted to do this! 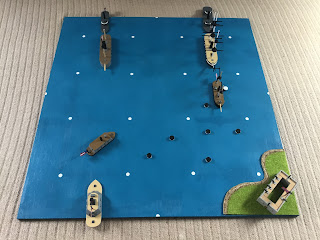 I am reverting back to using two squares for a model rather than having them in a single square.

I rather allowed myself to be swept up in the Fast Play Portable Wargame 3 x 3 frenzy of a while back - mainly because I saw it as a bit of challenge to see if it could work (it did and surprisingly better than I expected it to) - and this had the effect of making me look at the rules from the wrong starting point. In effect I was looking from the bottom up rather than the top down. What I should have done was to have the main set of rules WITH a 3 x 3 variant rather than vice versa.

It is by no means a major change to the rules - this is where they started from originally - rather it is more of a ‘pressing the reset button’ kind of thing.

As mentioned previously the use of two squares for a model was something I originally saw in an old age of sail set of rules called ‘Ship ‘O the Line written by the late S. Craig Taylor of Flat Top (and other board games) fame. The rules were originally written for use with miniatures and were eventually redeveloped and simplified to become the hex based award winning Avalon Hill board game Wooden Ships and Iron Men.

So what does this mean?

The most significant thing about this revision is that more of the playing area will be available to use. Using a single square meant that a model ship appeared to be taking up an awful lot of sea room/table space which in turn meant that close range combat within a square - gunfire or ramming attacks - became quite clumsy to work out in respect of arcs of fire or point of impact etc. It felt really cumbersome in operation.

Ship speeds can be modelled far more effectively - essentially movement allowances are doubled - and manoeuvrability is enhanced. The latter may not be wholly accurate but it does make for a better game.

Gunfire ranges are now tidier as they can be shaped far more effectively to the type of weapon in use. It also means that firing arcs are far more logical looking.

This is a revision that in my mind is quite simple but in reality will mean a fairly extensive redraft of the rules to incorporate. I am not unduly concerned by this as I absolutely believe this is the correct thing to do to get the rules to where I want them to be and to be honest, it is something I should have considered sooner but hey ho, we live and learn - besides, it is all part of the fun!

Many thanks old chap! Technically it is a development but I am looking at it as being a kind of ‘Bobby Ewing emerging from the shower’ moment! Seriously though, all I am doing is resetting the rules to their original form but with the benefit of a lot more playing experience and some independent insight.

Having read this blog post, I can see the logic of your decision and I think that it is the right one to have made,

I look forward to seeing the final draft of your rules.

This is what has been gnawing away at me for some time and to the overall detriment of the process! The big positive though is that the single square option was given a thorough work out. As an alternative for smaller scale models it may work quite well but for me the smaller squares and using two of them per ship feels a lot more comfortable.

Incorporating this into the draft is quite straightforward but as mentioned, there will be a lot of changes to the text as a result. I feel quite calm about this, probably because deep down I know it was the right choice to make.

Writing functional rules is akin to magic to me, so I have much respect for those authors that can manage it!

I have to agree with you on both points!