Slightly out of Sequence

If I am honest this is the post that should have gone up prior to the Grand Fleet Review but I was so excited about getting the whole shebang onto the blog I opted to write this after. During the course of painting the models for the collection I have made a point of posting those models that are completed as and when they are done and so for good order sake I wanted to finish off the RN collection with the following pictures. The photographs also benefit from being rather closer than the squadron versions so that the detail of the model is more apparent.

The following batch of models are, quite coincidentally, all made by Panzerschiffe and are cast in a resin type material. they are only available from the USA and are pretty basic in respect of detail - I remember reading someone once describing them as having "carved from a bar of soap"; a little unkind in my opinion although GHQ they are most certainly not. As gaming pieces they are absolutely ideal and as a scale - 1/2400th - I am completely sold on them over 1/3000th. 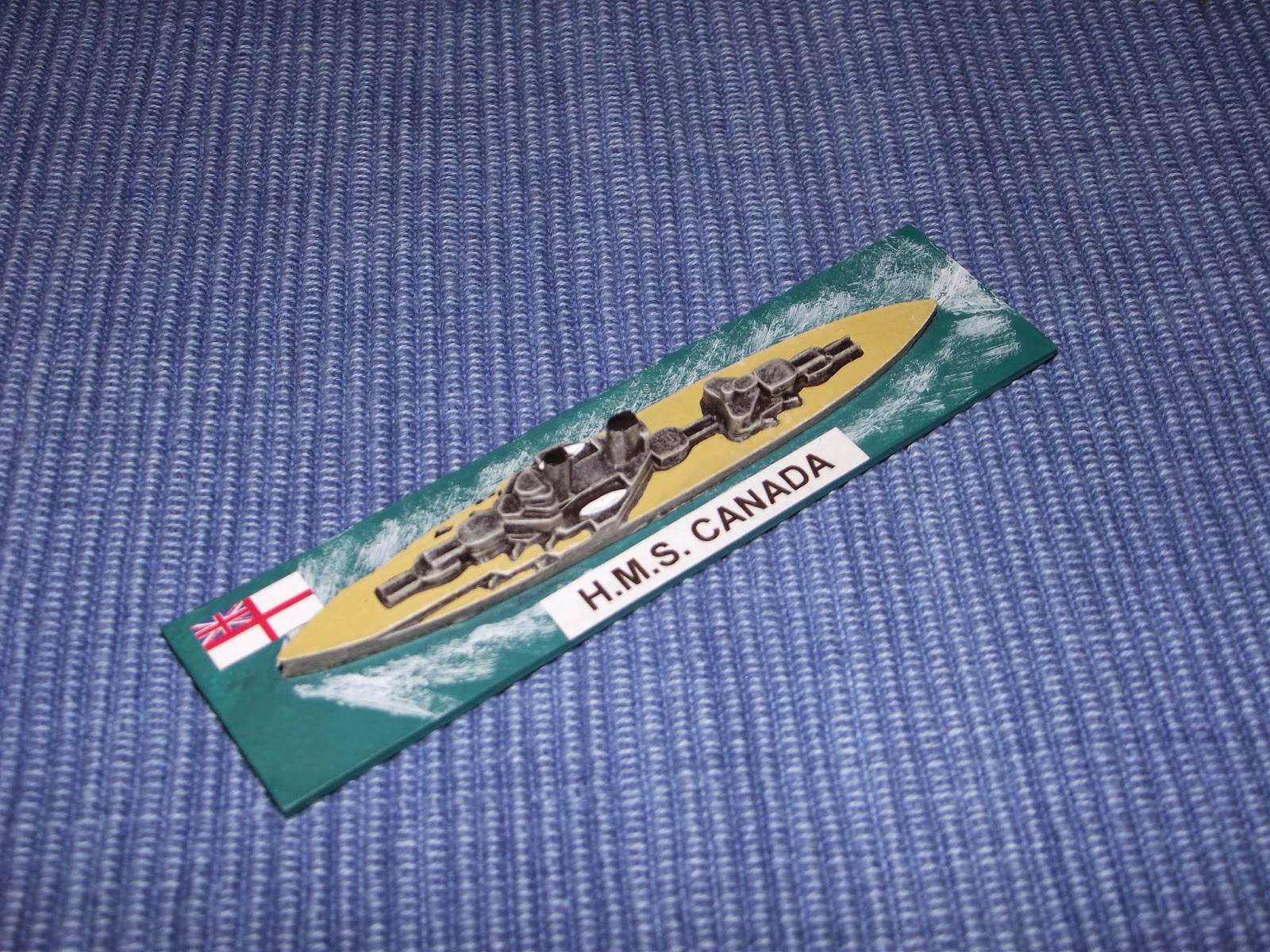 H.M.S. Canada. Ordered by Chile as the Almirante Latorre she was purchased by the RN and served during WW1. She was returned to Chile and was not scrapped until 1959. After Pearl Harbour the US gave serious thought to trying to buy her to bolster their fleet - I am quite sure the Kates and Vals of the Japanese Navy would have been delighted to make her acquaintance.... 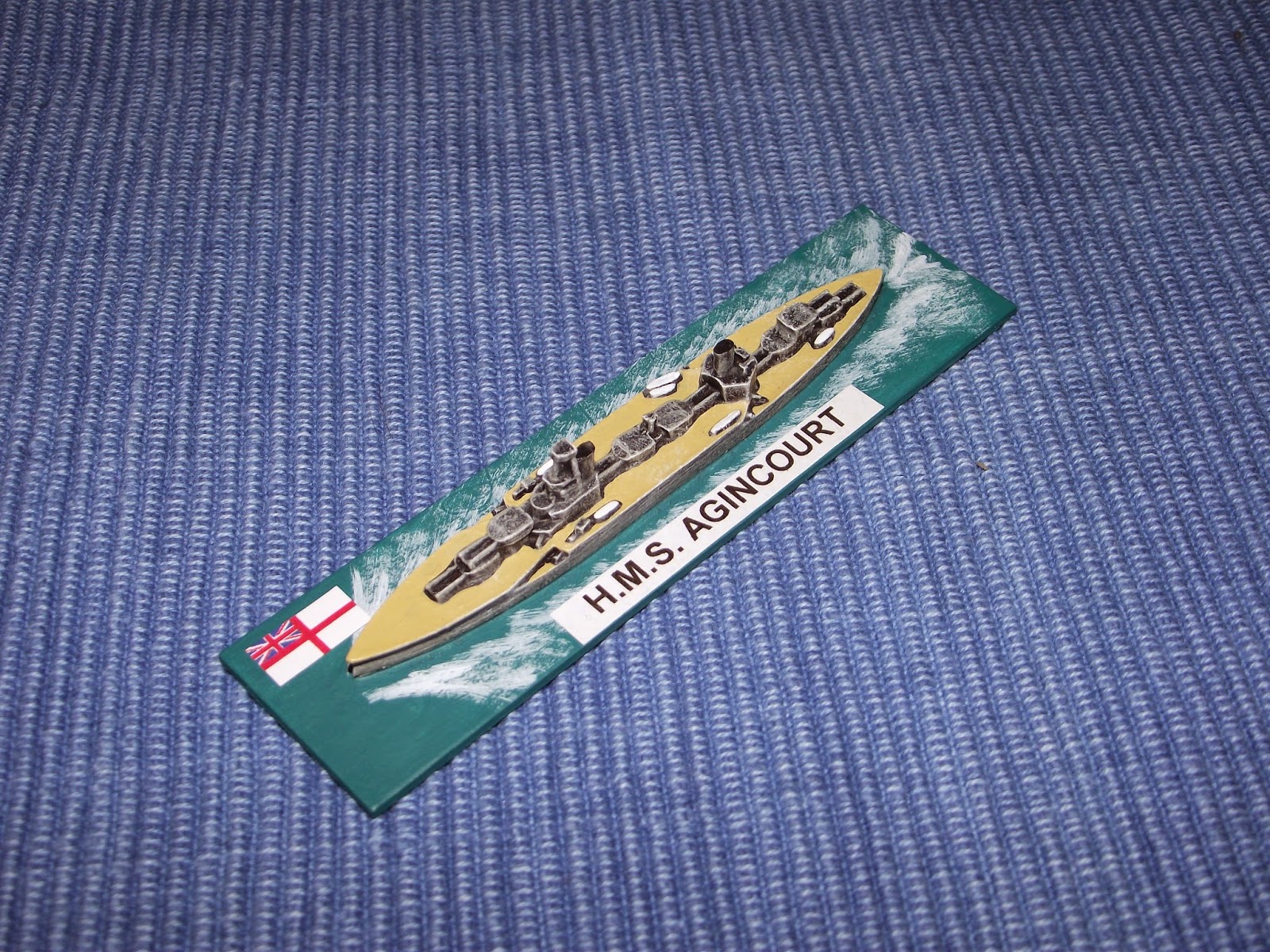 H.M.S. Agincourt. Ordered by Brazil, paid for by Turkey and, ahem, requistioned by the RN. The only dreadnought to feature seven main gun turrets. 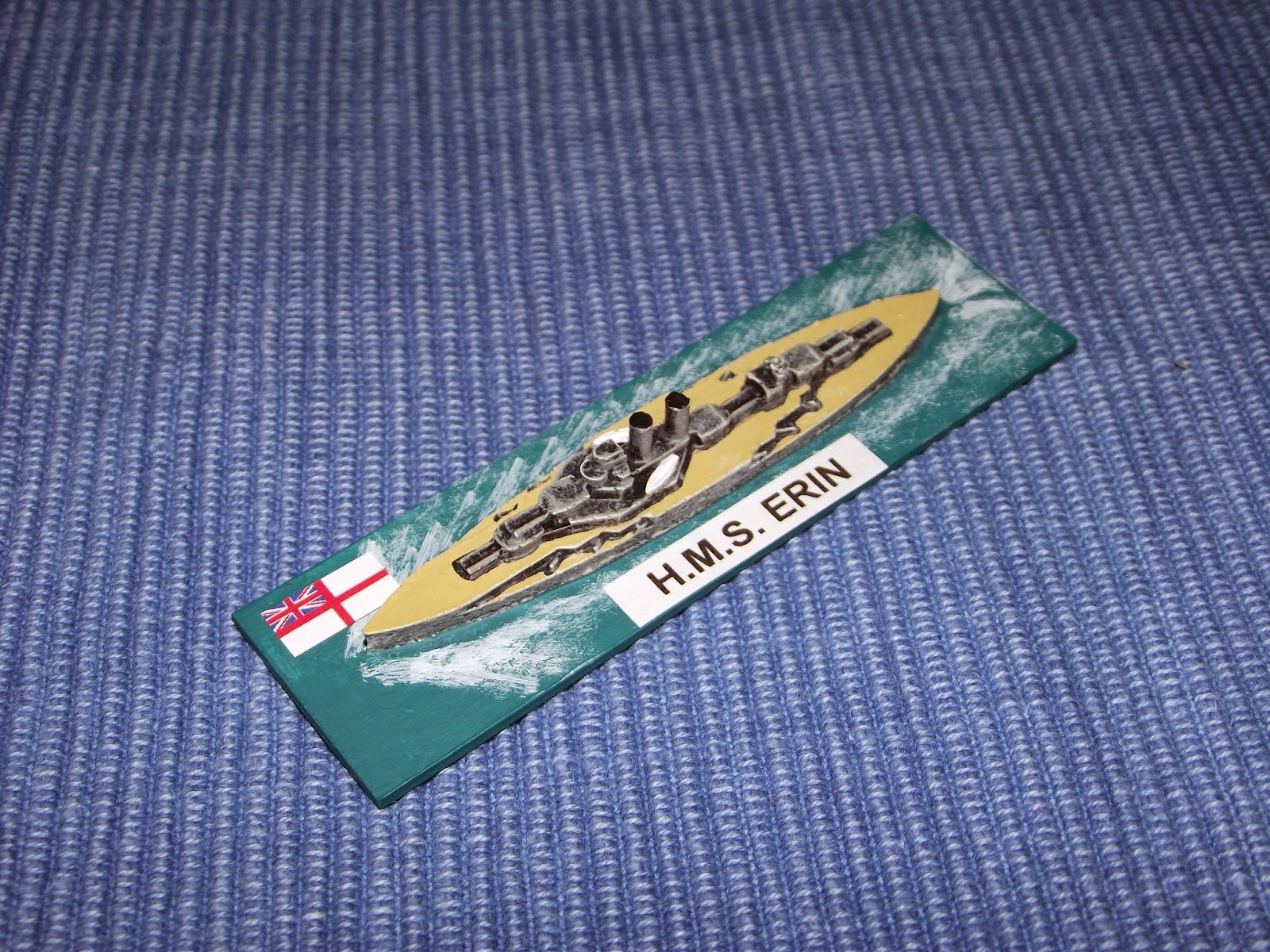 H.M.S. Erin. Ordered and paid for by Turkey and again requisitioned by the RN. She was highly regarded and differed from the RN centreline ten gun dreadnoughts in having Q turret mounted a deck higher. 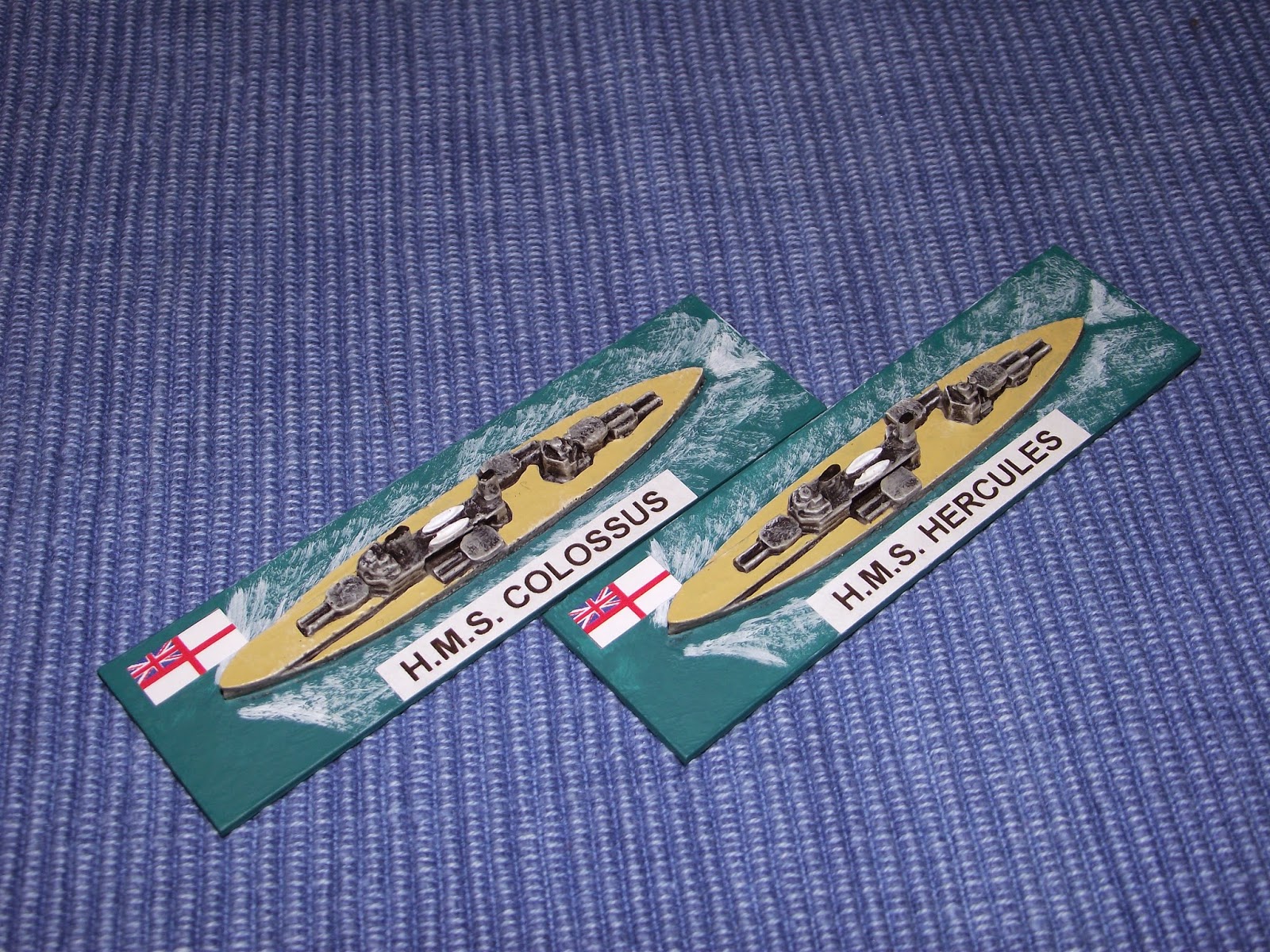 H.M.S. Colossus and Hercules. Built to allow limited ten gun broadsides using the offset turrets - these were the opposite way around to the German ships using the same technique. 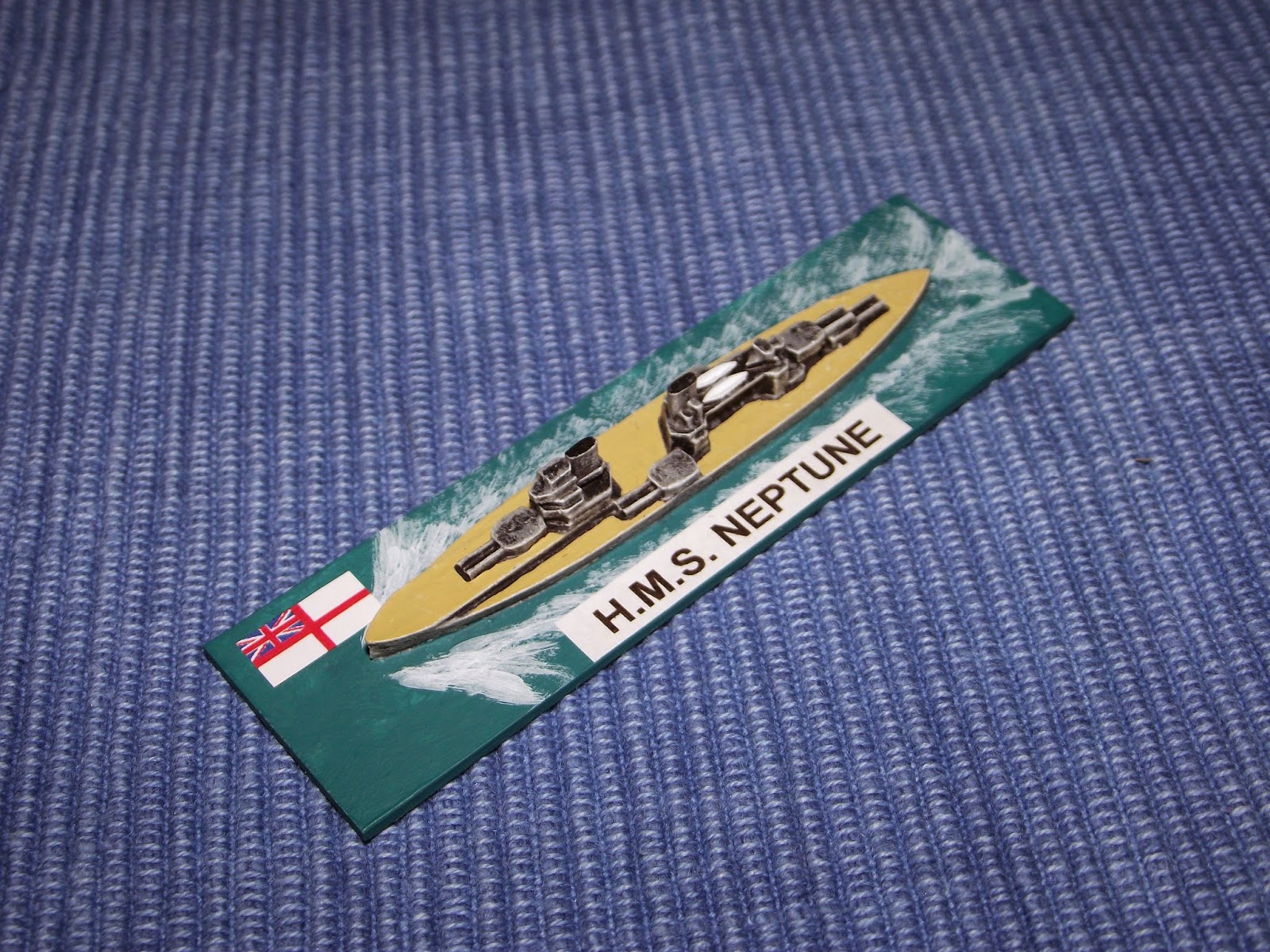 H.M.S. Neptune. The first of the group of three ships including the two above.

That concludes the 'close up' pictures of the RN ships thus far. the next batch will feature the armoured cruisers but they will not be appearing for a while yet as the German High Seas Fleet needs to be finished first.
Posted by David Crook at 06:22

Your ships are quite nice indeed, sir.

As for Panzerschiffe, I have a lot of them for my Pre-Dreadnought fleets and you are correct, they make lovely (and inexpensive) gaming ships . . . and I fully agree that 1/2400 scale is far superior to 1/3000 during this time period.

You might want to watch the offerings from War Times Journal, however. Some of their ships are a bit less expensive than Panzerschiffe (especially TB/DD classes), and their catalog of WW1 ships is expanding quickly. I am not certain of their shipping costs, which might cancel out any savings...

Many thanks old chap! I really like the durability of the Panzerschiffe models and the size gives a little more presence than the 1/3000th models which is very important in the earlier era. Having said that building a WW2 collection would not be a great hardship!

I have seen the WTJ offerings and they really nice. I doubt if I will use them though as they are too detailed and expensive for my needs - except of course for the really small stuff.

The models in this post featured in the fleet review but I had not shown them individually as is my custom. I really like the model of HMS Canada though.

Very nice again. Is that black undercoat, silver drybrush you are using for the superstructures, or is the drybrush grey?

The undercoat is black and I then drybrush with a medium grey followed by a lighter grey. I then paint the decks. Then, a very fine drybrush using pure white just to catch the raised edges.

I then paint the ship's boats and the funnel tops. It is a quick technique although the decks take a little while to tackle - especially as they need two coats.

From such modest looking castings they certainly scrub up rather nicely. I have settled of the way I shall be handling light cruisers as well so can (at last) think about the order for these.