The Grand Fleet at Jutland - A Review

I have finally managed to finish the Royal Navy battleships and battlecruisers for my Jutland 2016 project so I thought perhaps a fleet review would be in order. The German opposition should be finished by the end of the month which will mean that phase one of the project will be complete. Phase two will see the cruisers (armoured and light) tackled and phase three will feature the destroyers. I am not working to a set timetable for these - as long as they finished by the end of the year it will make little difference to the overall plan. 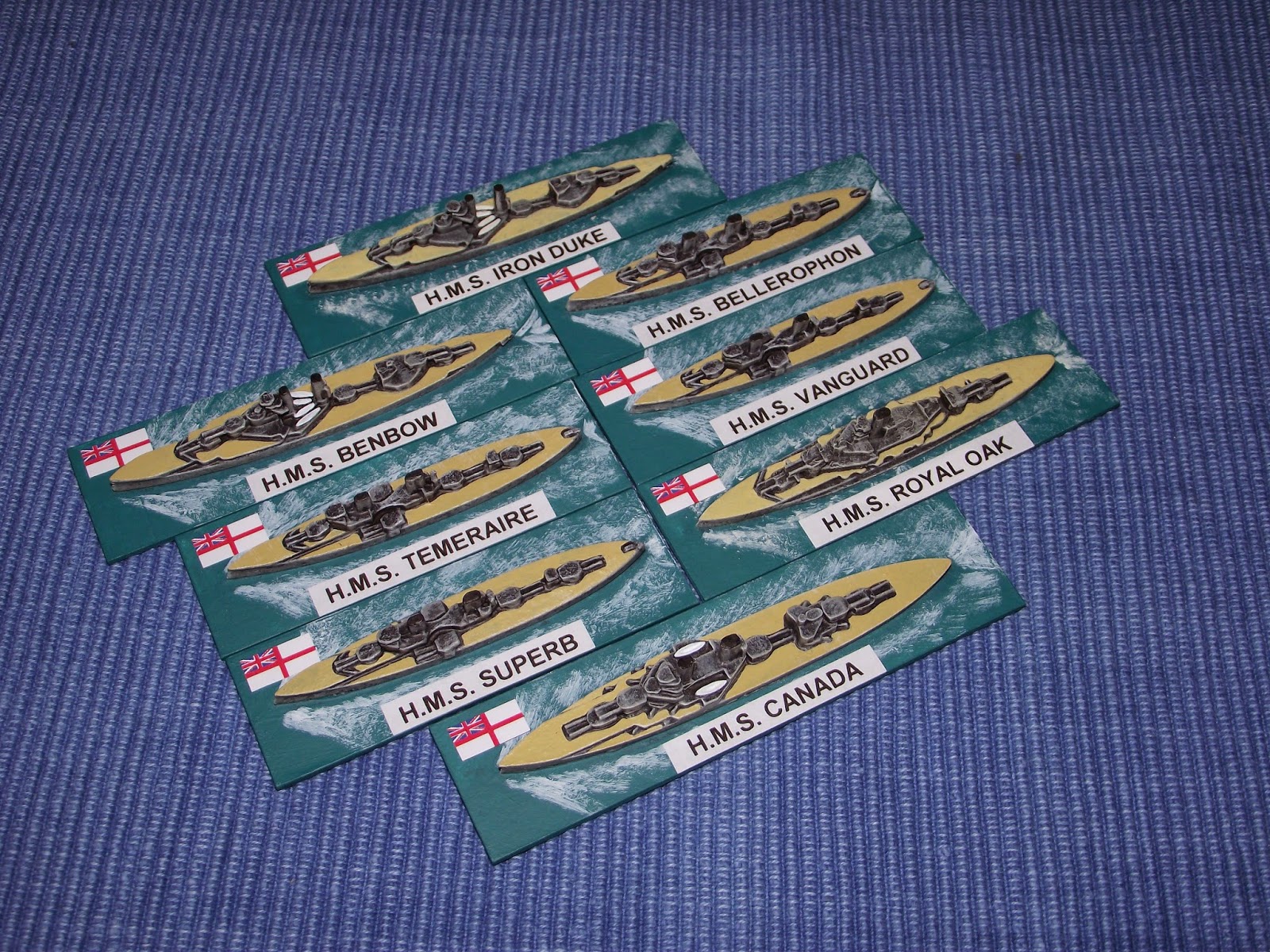 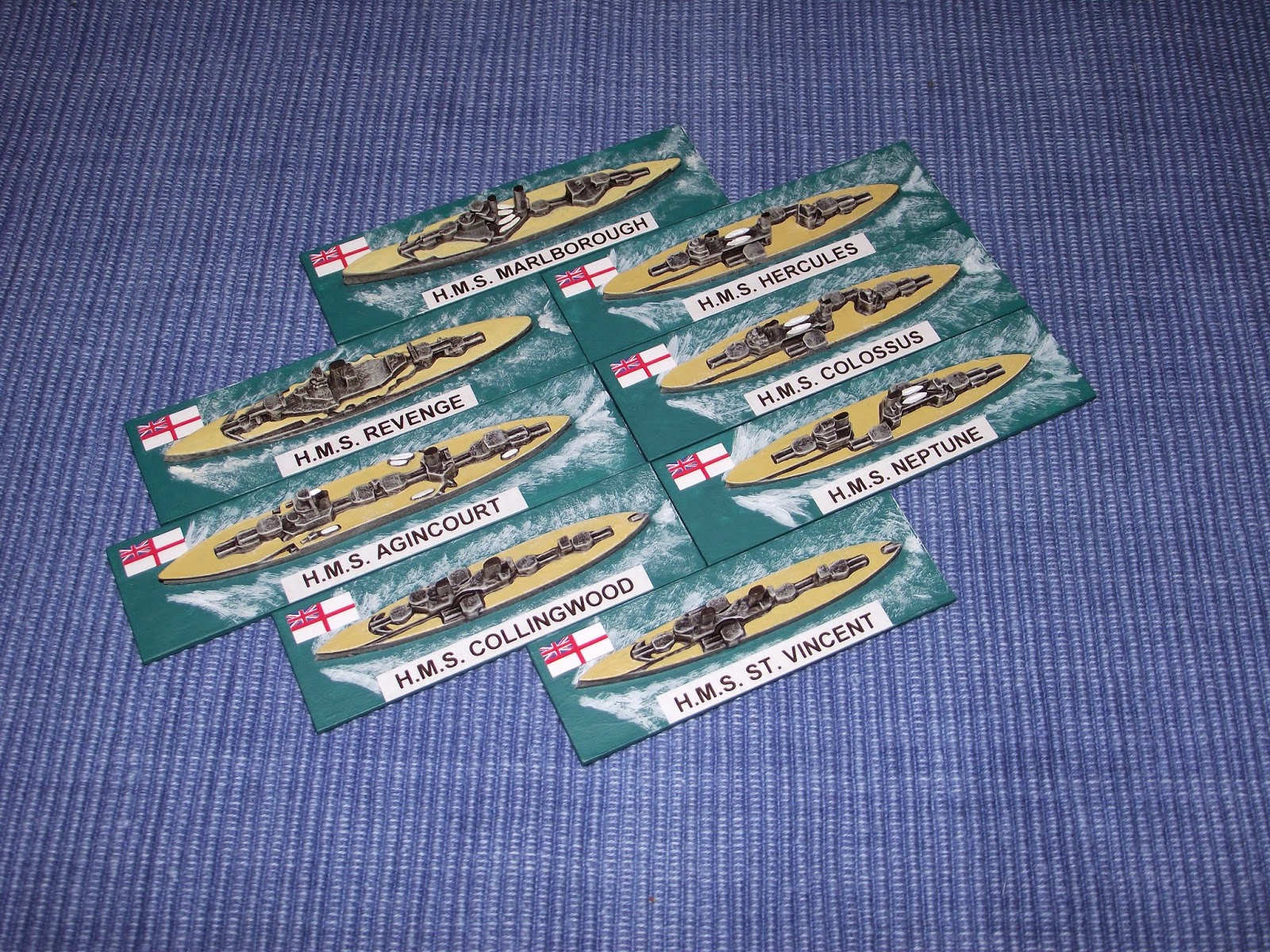 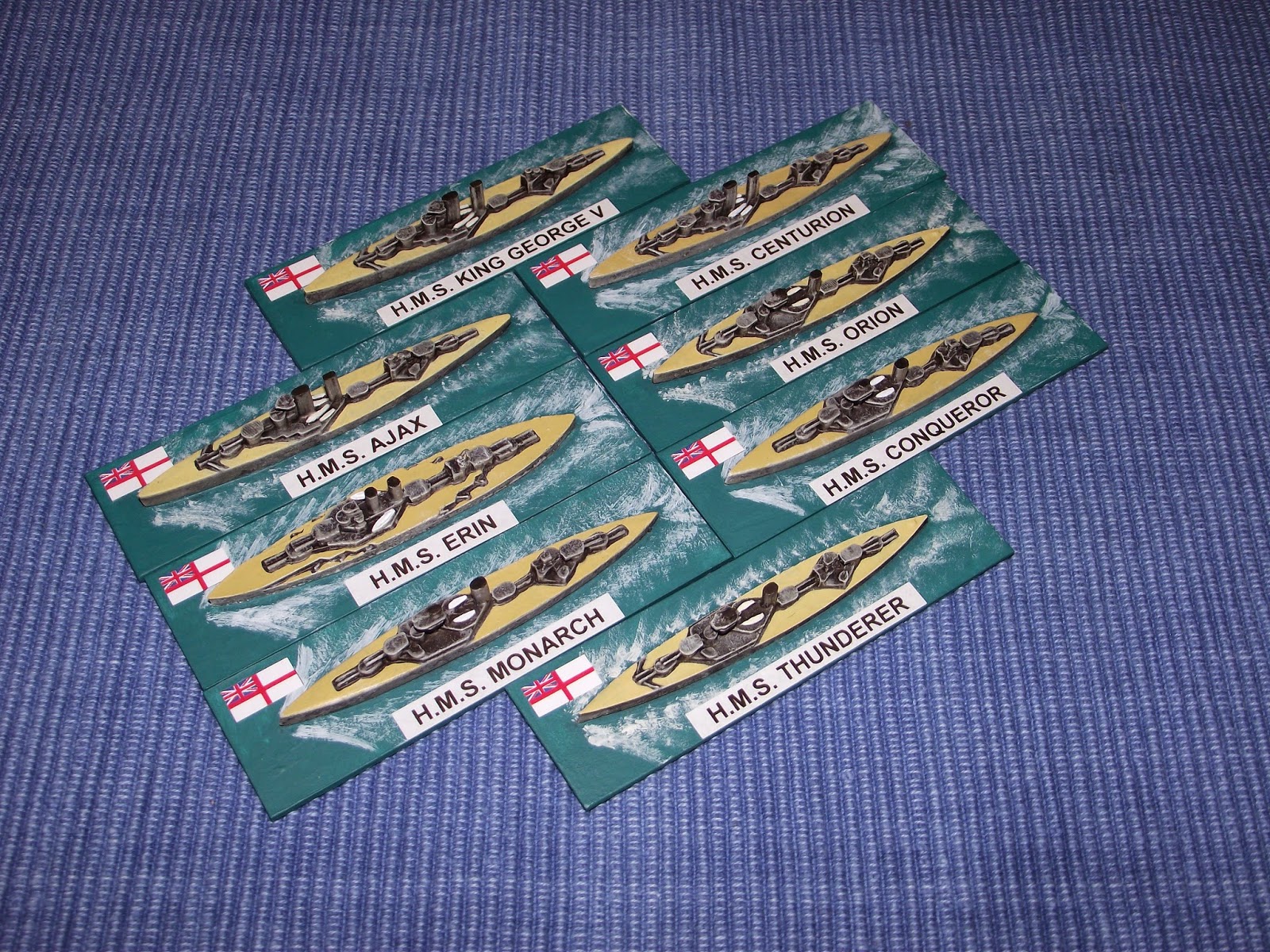 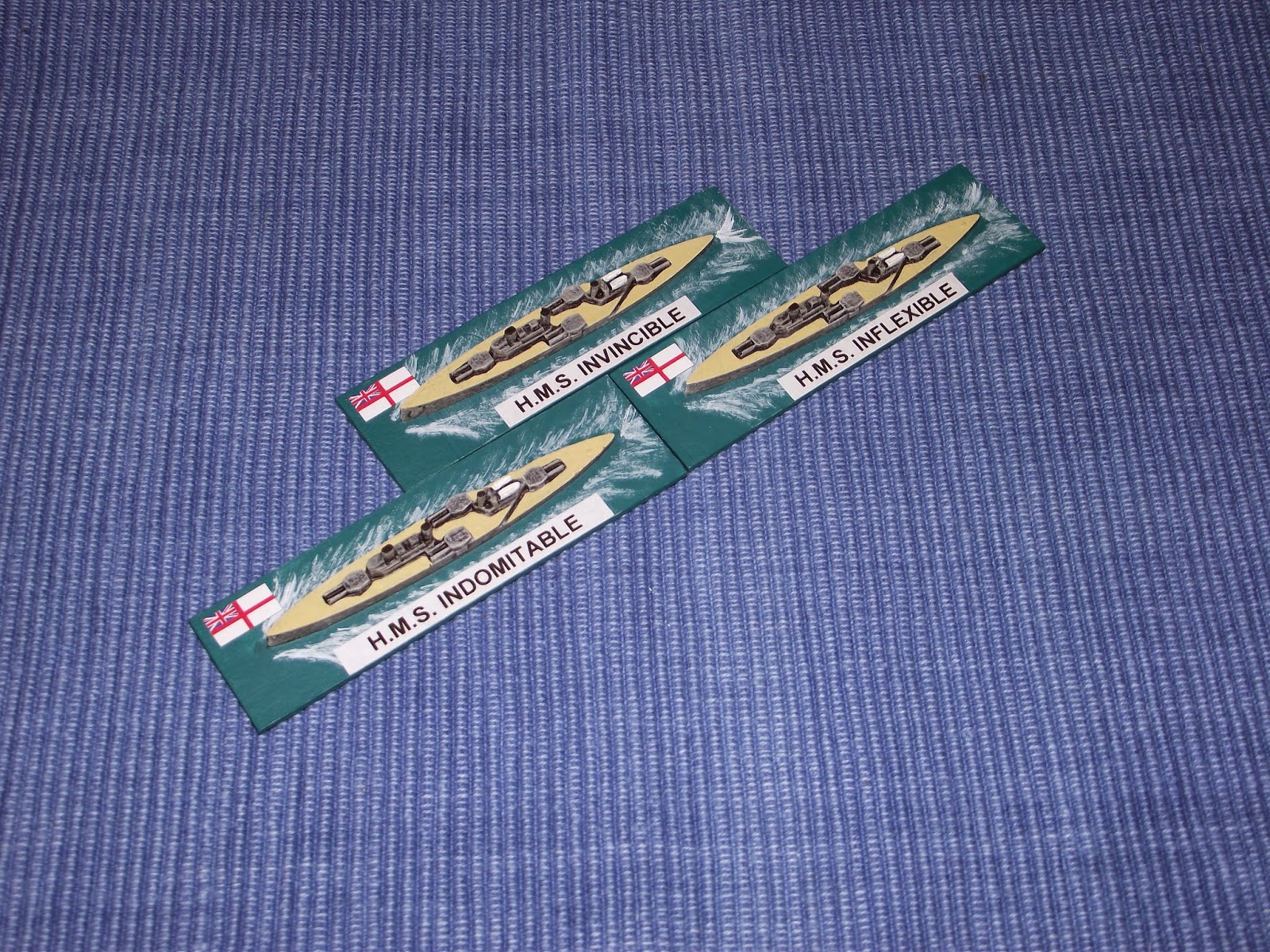 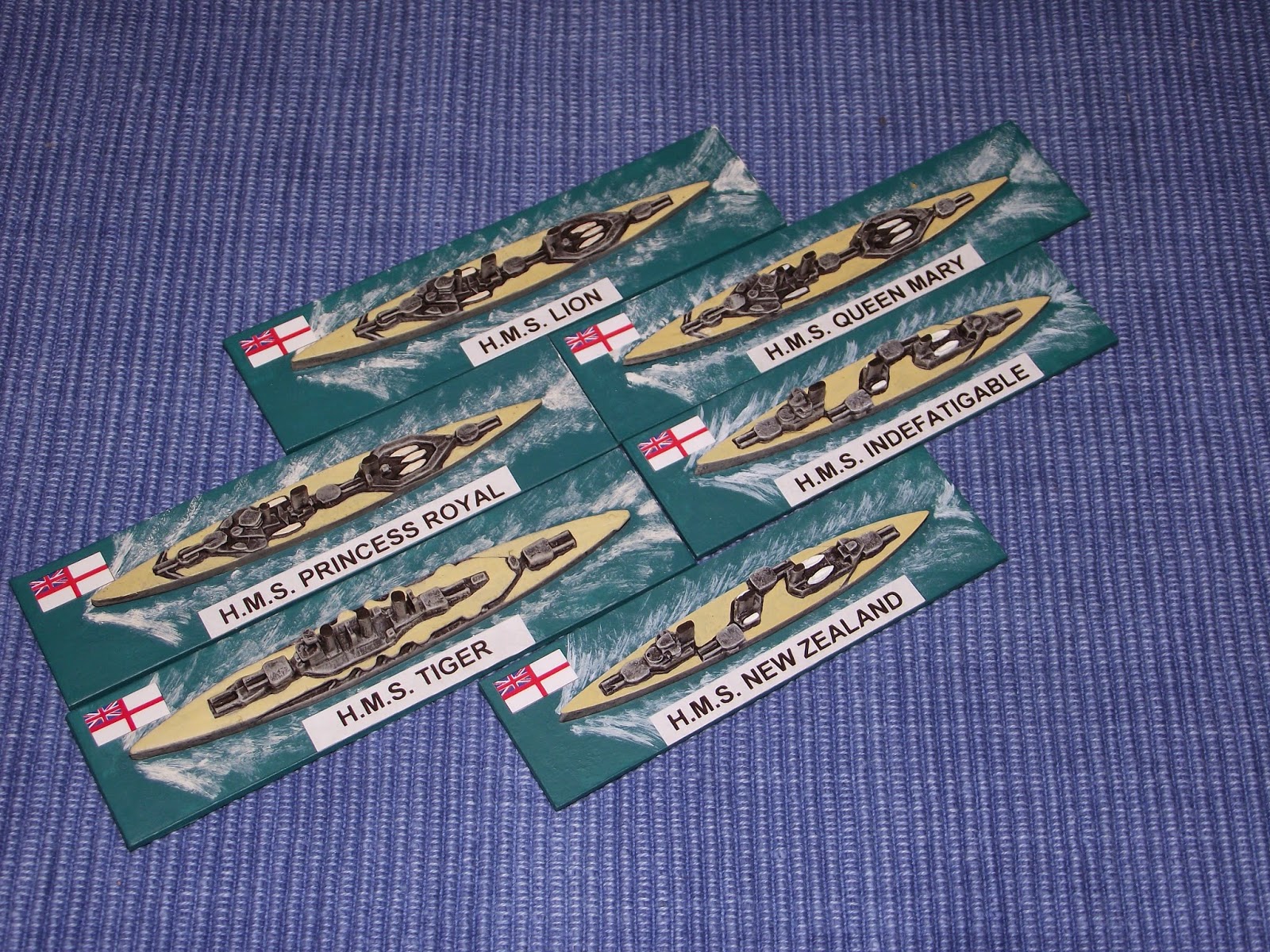 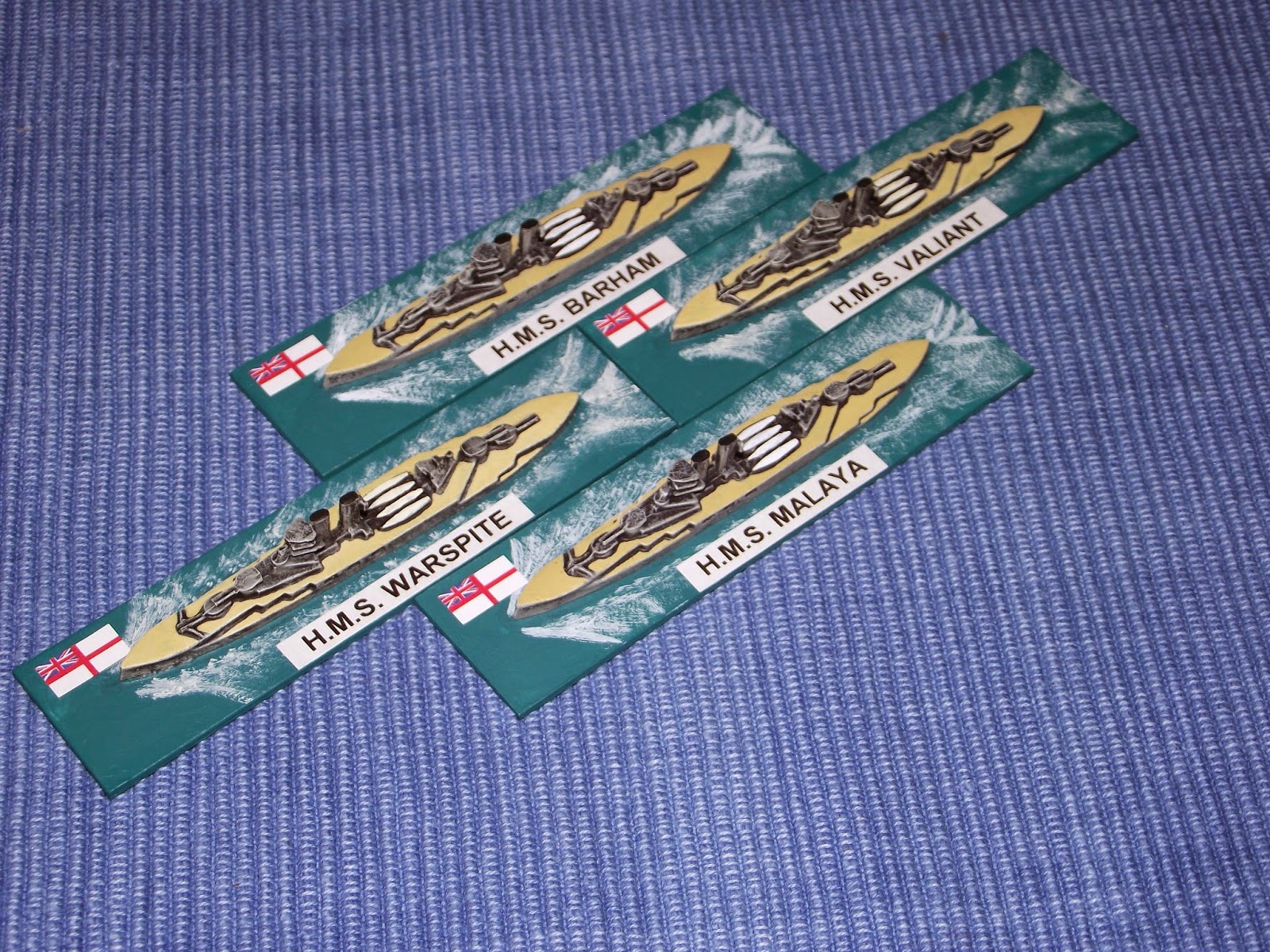 All of the models have been painted using a matt black undercoat and a combination of enamel and acrylic paints. I use two shades of grey for the RN and a single for the Germans with some final highlights in white - as are the lifeboats. The decks for both sides are painted in either Vallejo buff or Humbrol Mast Oak/Unbleached Linen. the bases are painted, rather un-North Sea-like, in a Windsor and Newton colour called Cobalt Turquoise. I chose this as it is a close match to my Hexon sea tiles and also is very Eastern Mediterranean - which is where this little lot may be seeing action in the future. The name labels I designed myself and the naval ensigns are 1/600th scale self-adhesive types prepared for me by Brigade Models. 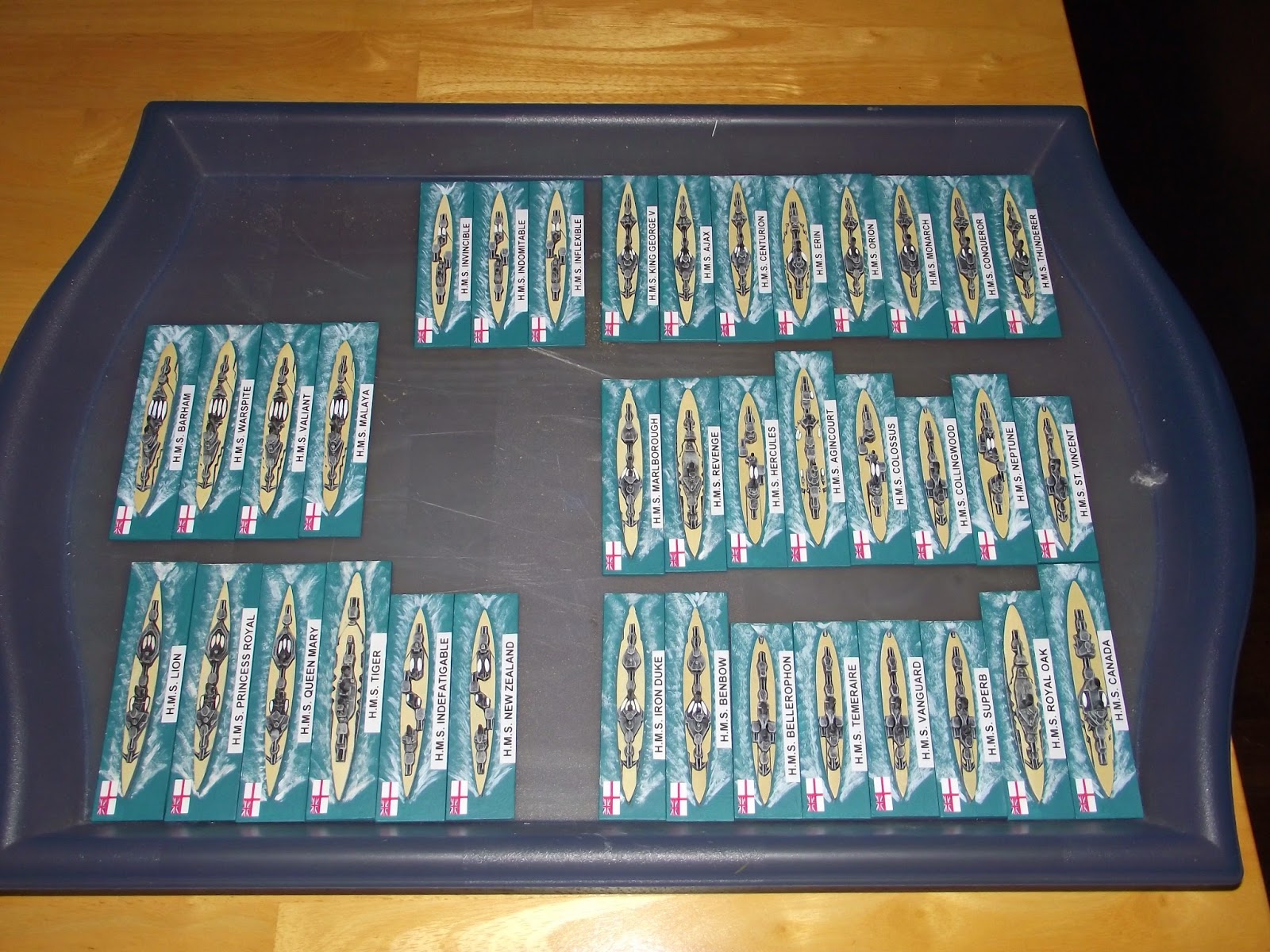 The collection prior to going into its designated storage facility


The models themselves are from two sources - Stonewall Miniatures and Panzerschiffe. I should also at this point doff my cap to the redoubtable Mr. Fox as had it not been for him and his passing over of his collection of Stonewall models into my tender care I may never have even considered undertaking this project. Many thanks old chap!

I am rather pleased at how these turned out....;-)

What a most impressive sight and achievement! The individual ships have be painted very effectively and en masse they look like something one might expect to see in a museum.

Very well done ... and I look forward to seeing the German High Seas Fleet in the near future.

They look absolutely ship-shape to me, sir.

All ahead flank and steady as she goes, eh?

...and why wouldn't you be pleased? Superb!

Many thanks indeed for your kind comments - they are much appreciated.

It has been a labour of love and although the models may not win any competitions in terms of detail they are really good gaming pieces. I love the scale and am looking forward to finishing the remaining Germans for this phase of the project.

The cruiser section will be interesting as I intend acquiring models above and beyond what I need for Jutland - I am thinking about cruiser 'hunt the raider' type Von Spee actions in due course.

Absolutely! Many thanks for the kind words - the rest of the capital ships for the Germans (including the pre dreads) should be ready in a couple of weeks and so I will be having a similar review then.

Seeing them deployed in their squadrons certainly made me grin I can tell you! Many thanks for your kind words - they are much appreciated.

Very nice! And now, for some equally nice targets...

"There's nothing wrong with these ships, Chatfield." A fine looking battlefleet, sir!

It irks me that HMNZS New Zealand was there and HMAS Australia was not - because the damned Kiwi rammed her in a training exercise!

Many thanks old chap! The targets are are currently undercoated and on the paint tray and will be underway over the next few days. This consists of 7 dreadnoughts and 6 pre dreadnoughts.

Cheers old chap! GHQ or C in C they are not but as gaming pieces they are hard to beat - especially as the Stonewall metal models are actually cheaper to buy than the Panzerschiffe resin ones!

I must confess that the painting technique I have used on these models owes a big thank you to Tim Gow of Megablitz and More fame - he uses it for his 1/1200th adventures but it certainly works well with these half-sized versions.

Cheers and many thanks old chap! There were a number of incidents of ships going bump into each other during the Great War - just luck of the draw I suppose - but I am sure it was not some sinister New Zealand plot to get one over the Aussies!

If it is any consolation I have some plans for my model of H.M.A.S. Australia and her escorts - something based in the South Pacific and involving German cruisers....;-)

That IS exciting news - the Aussie capture of German New Guinea and the hunt for Von Spee's East Asia Cruiser Squadron is quite a tale.

It is just as well I kept the plot maps from the Avalon Hill game Flat Top which covers the area very nicely. One for later in the year and guess what? I already have Scharnhorst and Gneisenau for the Germans....;-)

Many thanks old chap! This is only a small part of the whole thing and the Germans are following shortly.

The last of the Germans are currently being finished so at least the capital ship part is finished.

I am rather pleased with how these have come out though!

What can I say? For once words fail me ~ and you know how rare that is!

Oh boy, your fleets are beautiful, superb, brilliant. Well done, old friend, you've done a great job and I can't wait for May 2016.

Give yourself a well earned slap on the back.

I thought you might like them! Many thanks for the kind words old chap - much appreciated. Next on the agenda will be the cruisers followed by the destroyers.