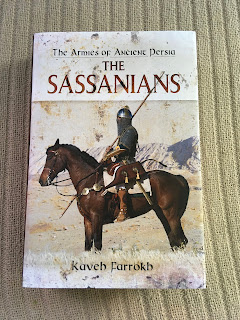 A great doorstop of a tome with an outstanding level of coverage - take a look at the contents below. 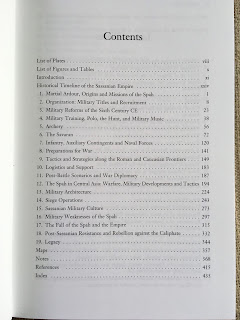 Many years ago, whilst still a young boy, I remember receiving a book as a Christmas present called ‘The History of the World’ by the splendidly named Plantagenet Somerset Fry. I was hugely inspired by this book and the wonderful colour illustrations therein and there was one that always stuck in my mind. There was a chapter about Persia (I think) and the picture at the head of this was of a Parthian horse archer shooting backwards - the famous ‘Parthian Shot’.

Fast forward to the Newham Wargames Club and the advent of WRG 6th edition ancients and I found myself looking at figures for a 25mm army consisting solely of Cataphracts and horse archers. I never got around to it though as the Carthaginians appeared and so my efforts were directed at the exploits of Hannibal. There were two later Persian armies in the club at the time - both of the Sassanid era and  in 6mm and 25mm - and they had a fearsome reputation. The 6mm army was around 20K points worth whilst the larger version was a far more modest 4K or so. Both had the full range of Clibanarii, Cataphracts, Elephants and levy infantry and as mentioned, they were fearsomely effective. I managed to beat the 25mm version with a late Roman army - one of my last games with 6th edition and long after the Carthaginians had headed off to pastures new - by the simple expedient of covering the entire front of the army with caltrops and using bolt throwers as anti-elephant guns! I must admit that I was rather in awe of the Sassanid Persian army and it was certainly one that I rather fancied owning at some point.

I should perhaps point out that to anyone owning a Carthaginian army under WRG 6th edition any army that featured extra heavy or super heavy cavalry armed with lance was considered to be the height of luxury....

Fast forward to (more or less) the present and the world is a very different place. The latest version of Command and Colours covers the start of the Medieval period and features the late Roman and early Byzantine wars, primarily against, you guessed it, the Sassanid Persians. Our friends at the Plastic Soldier Company have just launched a brand new set of rules for the ancient period with some supporting figures in 15mm cast in a new plastic/resin material and available in army packs for, you guessed it, late Romans, Sassanid Persians, Goths and Huns.

Aside from the WRG Armies and Enemies of Imperial Rome and the follow on Dark Age volume (there is the inevitable Osprey and I seem to recall something published by Montvert on the Sassanids) my library is a little light on this army so when I saw the title at the start of this post I thought that would rectify this. It is hugely impressive and one of those books that ticks so many wargaming boxes. I have not decided how to progress this beyond the Command and Colours option but having some comprehensive background may stir some future developments.

What a great name for an author, or for anyone else for that matter, and loved the title of this post; very clever.

It is a really informative book and I am very pleased to have it. Persianally I am not averse to the odd pun or two so many thanks for your appreciation....

It does have a certain ring to it! Many thanks for the comment re the post title - I wanted to thank you in Persian.

When I was at school, Super Heavy Cavalry and Elephants were definitely the troops everyone wanted; I think it was WRG Ancients v.4 then. It's so long ago it probably wasn't even called Ancients!

Oh dear. I am afraid it took a little while to get the pun. Very good. What prompted this comment was your mention of Newham Wargames Club. I think I must have left the area before your time but as I recall the premises were formerly Wall Models run by Mike Wall who I believe became a chiropodist. Happy days. Best wishes. Jim

The problem I had at the time was that in 25mm nobody at the club had any armies that were contemporary to the Cathaginians - the sole exception was a Seleucid army that inflicted a catastrophic hiding to my army at Present Arms. I fought the same army again later and Magee to lose but not quite as much!

It was rather more successful in its 15mm version as a good friend of mine had the Republican Romans.

Everyone had armies with either lance armed cavalry, two handed cutting weapons or hordes of missile troops. For all that the Carthaginiand were great fun to use.

It was indeed Wall Models before becoming New Model Army Ltd when Eric and Ivy took it over. I think I may have met Mike once but cannot be certain.

Thank you for the comment re the pun - I enjoy these as I am that kind of Persian....