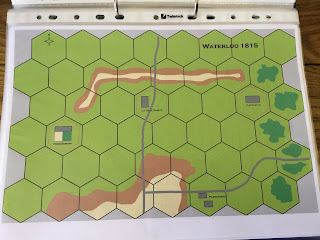 Small, manageable and I even have the figures for it. It will be pretty straightforward to organise and a good primer for a larger version at some point

It has been a week of reflection; a week to regroup, rethink and above all, to reinvigorate. It has taken many paths - support from friends and family, plenty of fresh air and being busy and just letting thoughts wander where they will, unfettered by self imposed obligations or responsibilities. Plenty of sleep - although still unsettled I have been able to substitute quantity for quality - and sensible eating and drinking have all helped.

The Del Prado collection is now in its new quarters which means that I can work on it as and when I want to rather than feeling obliged to do so. It will be at a much more sedate pace which will be far more readily enjoyable. I have pottered about with some scratch building which is something I have missed doing and is wonderfully therapeutic. It is scratching a particular itch and is something I want to do more of. No details as yet but suffice it to say ships will be featuring.

I also took advantage of not feeling particularly energetic to tackle something rather mundane but curiously satisfying in the man cave. I suspect that I am not alone in having a vast library of photocopied rules and magazine articles, either obtained by our own devices or from friends, that has been acquired over time. I decided that sorting this lot would be a good idea and so I spent a very pleasant and inspiring afternoon doing just that. There was a veritable rain forest of stuff, most of which had never been used since printed and in some cases going back some 20 odd years. It was hugely enjoyable consigning most of it to the recycling although whether or not I will regret it going forward is another matter!

I will not bore you with a detailed list of what I found and kept but there are a couple of highlights - the Howard Carteresque ‘Wonderful things’ of the title of this post. A couple of years ago I managed to get a PDF version of the BattleLine age of sail wargame rules Ship ‘O the Line. I was really pleased to get these but the PDF did not have a copy of the Armada period supplement. Well, I found an earlier photocopied set that were given to me by Mr Fox that had the said supplement! I was really pleased with this as I had the in mind for something.

Another thing I found was a set of rules for relighting the battle of Waterloo on an 8 x 6 hexed grid. The system is called Waterloo A La Carte and for the life of me I cannot remember where I got these from. If anybody recognises the map please let me know.

Finally there was a pile of stuff based on a WW2 campaign set around some imaginary Greek Islands which, given my interest in the region, was a welcome find.

It was a simple thing to get done but I am very glad I was able to do so. In many ways it has enabled me to reset my hobby mojo so that it is once again enjoyable rather than being a chore.

I also have a lot of people to thank for lending me a degree of perspective.

It sounds as if you have turned the corner and are on the way back to a full recovery. I look forward to reading more about your current scratch-building project.

I like the map of the micro map Waterloo, and would welcome more information. It strikes me as something that I could use.

Pleased to see you getting back to normal. These things always take time in my experience.

Glad you didn't bin Waterloo a la Carte. It is one of mine. Rest of the bits are at http://flagsofvictory.blogspot.com/p/waterloo-la-ca.html.

I intend to play around with this one further. Two things have been bugging me about it, firstly I feel the need for an extra hex all round to give some room to manoeuvre and the second is to more closely align the units with the major organisations on each side.

Initially this started as a test of the Neil Thomas Napoleonic figure rules to see if they could be used to depict a real battle. I always thought they worked well.

So glad to hear that things are getting back on track. Alongside wargaming, I love gardening and 'woodworking', as well as being out in the countryside and have learnt over the years to go with which one interests me the most at any given time.

Many thanks old chap - that is much appreciated!

Subsequent to my email to you the author of the rules has commented so you will be able to see all the bits and pieces via his blog!

I have a few river vessels currently underway and hope to get these finished soon - they are something a little different and not for the ACW.

Many thanks for your kind words - they are very much appreciated.

Many thanks also for the link to your blog and the full piece for this - I am hoping to give it a spin over the next few days using my Del Prado collection with infantry units of 4 figures, cavalry 3 and artillery with a gun and 2 gunners. There will be an AAR on the blog at some point with the pictures.

I would be interested to see what you made of Neil Thomas’s rules on a hexed basis - are you still working on them?

Thank you old chap - much appreciated. I have certainly taken advantage of the good weather as well as catching upon some varied reading material.

The scratch building is fun to do and whilst I do not prefers to be an expert ar it I enjoy it all the same.

Latest attempt, that seemed to go down well, was a version of Neil's Simplicity in Practice using his OHW scenarios: http://flagsofvictory.blogspot.com/p/simplicity-in-hexes.html.

I'd be very interested to see what you make of these.