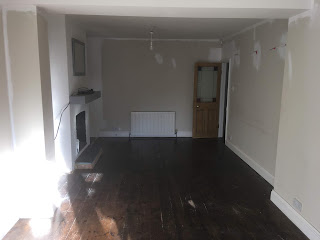 The lounge before and.... 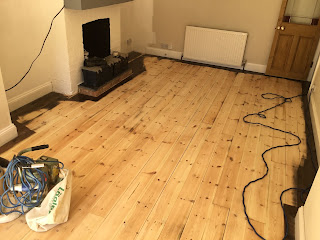 ....and mostly after. The contents are currently residing in the kitchen and on the landing!

There has been little gaming related activity over the last few days as we are having the lounge refurbished and redecorated. It has meant a lot of furniture moving, hole filling, unit removal, painting and a trip to the recently reopened recycling centre. It is all progressing well though and with luck the main bulk of it will be finished by the weekend.

Aside from some block labelling the main thing I have been doing is thinking and this has given greater form to a couple of ideas I am considering.

I will be reorganising and rebasing a substantial part of the Del Prado collection as per the Portable Napoleonic Wargame. I had intended to do this originally but allowed myself to get slightly sidetracked by the scale of the collection and the seemingly endless possibilities it offered. The big advantage of organising the collection in this way is that the additional figures I want will be far less. My plan is to organise brigade sized formations that can be scaled up as required for larger actions. The figure selection available in the Del Prado range lends itself far more amenably to this approach than building recognisably structured units with command groups and subunit distinctions

The only difference between how I will be basing the figures compared to the system in use in the Portable Napoleonic Wargame is that foot command figures, skirmishers and gunners will remain on their round bases and I will not be basing the guns. I will be starting this as soon as we have the lounge sufficiently advanced along the the road to completion that my absence will not incur the displeasure of the project manager!

Old Painter Bob has advised me that the end is in sight for painting of the remaining figures of my 30mm Spencer Smith ACW collection. This is great news and so I need to get back to work on the Texans and the two sharpshooter units I have planned to finish the collection with. These will be staying on their individual bases for use with a variety of rules where single figures are preferable.

I have rather a lot of Spencer Smith ACW figures left over so am looking at using these in a number of ways. To begin with, the figures would drop very nicely into two forces for the War in the Pacific. The uniforms are very colourful and as the kepi was very common some paint conversions would be easy enough to tackle. Another idea I am considering is something along the imagi-nations line with Fezia and Rusland featuring. There are also a couple of Colonial options that are nagging away at me so there are plenty of options for me to explore in due course.

As an aside the scratch building I have mentioned previously was very much Fezia and Rusland in mind.

So there you have it and as ever, much to ponder. I just need to be able to get back to it!
Posted by David Crook at 14:36

I like the new ‘base’ on your 1:1 scale project. Makes the room lighter.

And a wise move keeping the Project Manager happy 😉

It makes such a difference as the room was really gloomy beforehand. It has only taken us 15 years to get to it but the Project Manager is pleased which is the main thing!

The list of DIY tasks undertaken during this current situation is large enough to have its own post code!

I can echo your sentiments about 28mm!

The wife has just called you a "useful wargamer" .. a man in tune with the need to DIY .. very impressed with the lightening of colour .. lock-down day 76 and we too are looking at interior designs ;)

Lightening the place up has a very positive effect :)
Good work

I have never been called a ‘useful wargamer’ before and the DIY fest was needed (although not all at once to be sure!) so my beloved made sure that the lockdown was well spent!

The whole place is a lot lighter and this has had a very positive effect on my mood for sure!