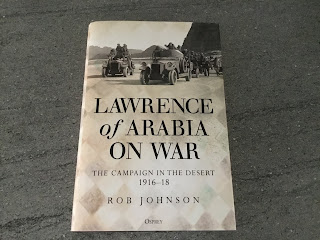 Best read with the film soundtrack playing in the background and sitting in 30+ degrees of sunshine!

Of all the theatres of the Great War the ones that will always capture my attention are invariably about as far removed from the Western Front as you can get and also usually feature camels. I am of course referring to the desert - be it in North Africa or Arabia. I have recently looked at the Senussi campaign as well as the fighting over the Suez Canal and in Palestine and of course, the great Arab Revolt, of which T.E. Lawrence was a part. Again, my interest in the life and exploits of Lawrence is well known and so whenever a new work is published about him or the campaigns he was involved with there is a good chance it will pique my curiosity.

Lawrence of Arabia On War by Rob Johnson (published by Osprey in hardback) examines the context of his war in the desert, and his ideas on war itself.

This is looking at the Arab Revolt from a different perspective as it not only looks at how it meshed in with the operations of the regular forces but also how the irregular forces could be accommodated and utilised to their fullest advantage - always a challenge and subject to a continual juggling act by Lawrence (not always successfully either).

The Arab Revolt is ideal Portable Colonial Wargame fodder (and I have a supply of 1:1200th scale desert buildings, some 1:600th Rolls Royce armoured cars and am casting covetous eyes at some Tumbling Dice aircraft in the same scale) and so this is something I will need to look very carefully at again. I will game it at some point but at this stage I need to be sure about the best way to do so.

In the meantime though I will probably watch the film again - purely for research purposes naturally....