Madasahatta: Carry On Up the Ogopogo 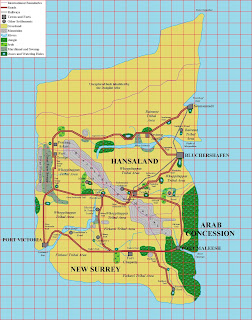 The reworked and updated Madasahatta map - superbly done by Bob Cordery and based on the original version. It certainly looks a lot clearer! The Ogopogo delta is in the bottom right of the map - notice Port Maleesh and also the extent of the jungle that borders on Hansaland territory.
For reasons lost in the mists of time the forces of France never appeared in either Madasahatta or the follow on South East Asia naval campaign, both of which were organised by Eric Knowles. Given the Colonial reach of the French historically this was rather surprising. As a gaming setting the island of Madasahatta has much to commend it for both Colonial and early 20th century games and so the following is an attempt to add a further chapter to the tumultuous and turbulent history of that tropical paradise.
My aim is to incorporate the French in some fashion - not as major players per se but with enough presence to ensure that the Germans have a minor distraction to contend with. I have tried to do this in keeping within the spirit of Madasahatta but at the same time adding a little historicity. The following then, concerns the Arab Concession and the French involvement with it. Imagine a city rather like a casbah on steroids, where temptations of the flesh and senses are to be found in abundance and available cheaply on every street corner and in every square and where the saying ‘money can’t buy everything’ is unheard of. A seething flesh pot and cesspit of a city where every pleasure, however sensual, gluttonous, debauched or depraved or material thing can be found for a price and where the traveller is always welcome - until their money runs out that is.

The Arab Concession, notionally under the suzerainty of the Sultan of Zanzibar (in turn under the suzerainty of the Fezian/Ottoman empire), had largely ignored (and in turn has been ignored by) the various machinations and jockeying for position undertaken by the Colonial administrations of New Surrey  and Hansaland. They have continued to plough their own furrow, since time immemorial, dealing in slaves (very much ‘under the counter’ these days) gold, guns, ivory, Daz, Mars Bars and other dangerous goods via the seething flesh pot that is Port Meleesh. Although technically neutral the Arab Concession has been observed as leaning rather more towards German interests - largely due to the somewhat dubious nature of the dealings between Jakob Geltmeister - the local representative of the government funded Hansa OST Afrika trading company - and Makmi Anoffa - the principal Levantine trader in Port Maleesh as well as the Sultan of Zanzibar’s representative - in a large variety of assorted trade goods and as such this has attracted several strongly worded memoranda from the British Governor, Sir Charles Buckpasser-Cleverly.

These have been largely ignored by the Arabs, safe in the knowledge that as friends of the Sultan, the Germans will have their back. The reality however, is a little more complicated.

The wig wearing, vain and brutal de facto enforcer of Port Meleesh, El Toupee, is a firm Francophile. Whilst serving as a doorman at a French Restaurant in Algiers - the Michelin rated El Grande Fromage - he developed a fondness for French cuisine and so when invited to act as a minder or ‘fixer’ by Makmi Anoffa he insisted on bringing the entire kitchen staff from El Grande Fromage with him. To a man they joined him - fear of broken legs etc being a powerful incentive - forcing the owners to close the restaurant down. Protests to the French Consul were in vain and indeed, the main consular concern was that French nationals were going into a lawless environment (Port Maleesh had been likened to Dodge City on a bad Saturday night) with little or no protection. The risk that the secrets of fine French cuisine could be obtained under duress was a serious matter so, after consultation with the French Colonial Office, it was decided that for the honour of France, a detachment of the Foreign Legion would be sent to Port Maleesh to provide security for the kitchen staff.

So the French embassy in Port Maleesh gained a first class catering arm as well as a company of the Foreign Legion for protection. It also ensured that El Toupee could satisfy his taste for the finest in French cuisine

It was an unwritten rule in Port Maleesh that all goods passing through were subject to a very minimal tariff that swelled the coffers of the ‘Port Maleesh Home for retired Traders and Entertainers’ - in reality these were split between Jakob Geltmeister and Makmi Anoffa - with El Toupee tasked with ensuring that such dues were collected in a timely fashion. Needless to say, El Toupee’s uncompromising hard line approach was so successful that this inevitably resulted in a sharp rise in smuggling and it was not long before the banks along the Ogopogo delta were a veritable hive of illicit activity. Geltmeister and Anoffa actively (albeit surreptitiously) supported this clandestine activity - mainly because their ‘consideration’ was unofficial and therefore not officially accounted for.

Due to the relative shallowness of the Ogopogo delta large ships would anchor in the road stead and their goods would be transferred to local craft for onward passage to Port Maleesh. A steady stream of Dhows of various sizes would be seen, travelling to and fro, along the delta but not all would unload at Port Maleesh. There were a few secluded inlets that were used for the unloading of smuggled goods and in some cases the larger gangs of these cutthroats were quite open about their activities. Rumours that these were on the payroll of Makmi Anoffa were rife but nothing tangible could ever be proven. It was pretty certain that Geltmeister himself also dealt with these bands but with both business partners turning a blind eye to the trade all was well - as long as neither gained the advantage.

Into this happy arrangement ventured El Toupee. The French catering staff under the auspices of the famed chef, Phil Et O’Steak, had been struggling to replicate the dishes for which they were famous due to the impossibility of obtaining the requisite ingredients. The duty that had to be paid on imported French cuisine - especially wine and cheese - was especially steep (this was at the behest of Geltmeister as his immediate superior, General Freiherr Von Boozy, positively loathed anything and everything about the French) so El Toupee decided to do something about this state of affairs and so would go into the smuggling business himself in order to ensure that his gastronomic tastes would continue to be catered for.

It was very easy to organise but when the commander of the Foreign Legion got wind of it he insisted, for the honour of France, in providing an escort to any and all cargoes of French delicacies.

Makmi Anoffa soon came to hear of this but rather than incur the displeasure of his minder took the pragmatic view that a happy enforcer was a willing enforcer and so turned a blind eye to it (subject to a small consideration naturally).

Geltmeister, largely for the benefit of his belligerent superior, gave a good impersonation of being an aggrieved entrepreneur but was far too shrewd a businessman to be bothered for long. Live and let live as far as he was concerned so as long as his ‘considerations’ continued to roll in he would carry on as before.

To keep the French delicacies ‘off the books’ so to speak, El Toupee had to maintain the front of these items being in effect being smuggled goods. Makmi Anoffa still took his cut but significantly the Germans were excluded. Anoffa maintained that under diplomatic law there was nothing he could do so the protests of the Germans about a French presence went unanswered - but not forgotten.

To maintain the smuggling front the French constructed a small jetty, midway between Port Maleesh and the entrance to the Ogopogo delta on the northern side with a couple of buildings for storing goods and a blockhouse for defence. A single platoon formed the garrison with a couple of machine guns and a 75mm artillery piece emplaced overlooking the facility. Once unloaded the goods would be taken overland by native porters to the embassy itself, under guard by the men of the legion. The tricolour of France fluttered over all, defiant in the breeze.

To further support their efforts the French converted a couple of small motor launches into gunboats to provide an escort to the Dhows carrying their goods. So it was that the French went into the smuggling business - all officially unofficial naturally....

To say that General Freiherr Wilhelm Von Boozy (Iron Cross, first class) was not best pleased by this flagrant insult to the flag of the Fatherland was rather like describing the eruption of Krakatoa as some minor seismic activity - he was apoplectic with incandescent fury - more so when he discovered that despite his strongest protests the Arab Concession merely shrugged their collective shoulders (mainly in the hope that the furore would abate so that business could could continue uninterrupted) in the face of such Teutonic remonstrations.

Von Boozy was not a man to take this perceived insult to the honour of the Fatherland lightly and so resolved to do something about it. Once his fury had subsided - a combination of ice baths and strenuous exercise calmed him down somewhat - he summoned his officers for a top secret and highly confidential planning session - the object being to remove the French from the Arab Concession without attracting international - especially British - attention.

Hi David -
All good and engaging so far. Methinks as more and more highly placed officials get 'in on the know' the profits from smuggling activities must have been getting thinly spread. All the more reason for a certain amount of ... rationalisation of affairs, eh? No doubt the arch-entrepreneurial Makmi Anoffa will be happy to see French and German eliminated from the board...
Cheers,
Ion

Great stuff David! You and Bob will have to put together another book.

Brilliant background story David and I loved the names, which made me smile this early morn:)

It will get a lot more intriguing for sure!

Double dealing, skullduggery and all other kinds of nefarious chicanery are just another day in the life of Port Maleesh so expect more twists and turns. Makmi Anoffa is a realist and now that the British and Germans are there (and now the French of course) he will strive to make the best of it - typically by playing both ends against the middle although the Germans are the ‘flavour of the month’ at present - chiefly because the business ties he has with them, not to mention their slightly unhinged commander and his army are a lot closer than the British!

In many ways this is very much ‘standing on the shoulders of giants’ but certainly revisiting the island and continuing the adventures of its assorted denizens will be great fun to do. As to another book? Who knows? Makmi Anoffa and I will think about it.....

Thank you old chap. The Madasahatta book has the full ‘dramatic personae’ and is a really good guide to the island although not a definitive history of the campaign. Most of the names were from Eric although the Irish emigre chef Phil Et O’Steak and of course, El Toupee are my own. There will be more to come as my next post will be looking at the situation from the German perspective......