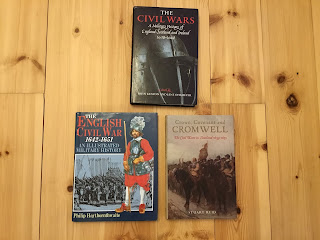 A trio of ECW goodness - a couple of oldies but goodies and the later Stuart Reid title.

My brother and his family are improving albeit slowly. They appear to be over the worst but given the ability of this virus to spring surprises even with the finishing line in sight our collective fingers continue to remain crossed.

I have not been doing very much gaming related but this afternoon found some time to review what I have in terms of background reading material and rules for use with the 28mm WoFun ECW collection.

As far as books are concerned and aside from the splendid atlas of the civil war recently published by Nick Lipscombe my library is fairly modest but sufficient for my needs at present. In addition to those titles depicted above I also have a copy of Devon and Exeter in the Civil War and also a copy of Stuart Reid’s All the King’s Armies - currently still with Dave Lanchester until such a time as when we are able to meet again at a show. I know there are Ospreys and Helions aplenty as well as a whole welter of other titles about the civil war but this lot will suffice for the time being. 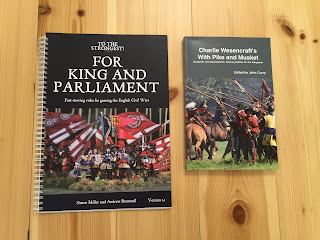 The new and the old once again. I am huge of Mr Wesencraft and will try to source a hardback version of this once we are back in show mode.

As far as rules are concerned I have a number of options to explore. I suspect I am not alone in being a bit of a rules squirrel when undertaking a new project and so this has been no exception! Currently in pole position are a Command and Colours variant penned by our very own MSFoy that look better every time I read them! They are available as a download from his blog along with the command and ‘Chaunce’ cards and a very handy non command card based system derived from his Napoleonic ‘Ramekin’ set. Pop over to his blog to see these - he is a very nice chap as well!

‘For King and Parliament’ are from the ‘To The Strongest’ stable and appear to have some very well thought out ideas in them. There is some quite superb eye candy contained in the pages and to me these look like a set that means business. I will certainly be trying these out once I have a few simpler games under my belt. That it not to say that they are complex, rather it is because they have a greater level of detail that I may not appreciate at first run out. The Command and Colours set are very familiar mechanics  wise so it makes sense going with what I know best at the outset.

The Wesencraft book is an old friend for sure that I had long forgotten about until a set arrived through the post from my old gaming friend Chris Hardman. There is a wealth of good, old school ideas herein as well as a large number of historical scenarios to try out.

The other rule system that will doubtless feature in due course will be the Portable Pike and Shot Wargame when it is published. I am really looking forward to this but in the meantime I have more than enough to be going with. I jus need to get some terrain sorted out!

The Wesencraft book is excellent and I'm lucky to have an original copy, bought a few years ago to form part of my library, as well as catch up on old title missed first time around.

The Haythornthwaite book is better than the Osprey ones IMHO and at a fraction of the cost. FK&P are great rules but you need to play them regularly to get the most out of the game. I'm looking forward to Bob Cordery's rules for this period, which will hopefully be out before Xmas.

What ever route you go down, I look forward to seeing games with these Wofun figures.

I remember buying the Haythornthwaite book when it first came out and being really impressed with it. Mine is a later version but I enjoy it all the same. I agree with what you are saying about FK and P but they do look a cracking set of rules that I shall look forward to using in due course.

I have a few terrain ideas that I am messing around with so I hope to get the WoFuns on the table soon!

I'd also recommend 'Going to the Wars: The Experience of the English Civil Wars, 1638-1651' by Charles Carlton, Routledge, 1992, as a really good, one volume [428 pp] description of armies were raised, trained, campaigned and fought in battles or sieges.

If you've got that, you really don't need anything else to understand the reality the ECW rules try to portray.

Good luck with your ECW project!

Based on your recommendation I tracked a copy down and I reckon that it wil help to round out the library nicely so many thanks indeed!

That's a good spread, David! I have the Haythornthwaite book - from a charity shop, I think - and was talked into buying 'For King and Parliament' ( not unwllingly! ) by their author at a show - he's such an enthusiast! Best of all though, The Charles Wesencraft book. I found that not so long ago and loved reading it, I really liked his discursive style! Loads of ideas, too, and a bit like 'One Hour Wargames', worth the price just for the masses of scenarios. I have not tried the rules but they looked fun, I thought - quite small units (maybe 10 figures or less), but I wondered if you could use a 'base' per figure and thus get more solid-looking regiments?
Good news about your brother and family - hope they continue to improve.

My brother and his clan are continuing to improve thank you - it is a long haul though but heading in the right direction.

The Wesencraft book is great for the scenarios and I could give the rules a spin using bases/hit markers of some kind. I am a great fan of his work and so was delighted to get a copy although I will try and source a hardback version once the show season starts up once again!