On WW2 in the Pacific and Vietnam ‘65 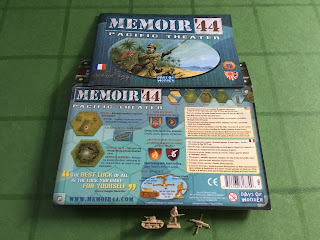 Memoir ‘44 Pacific style. The playing pieces seem to made from a harder plastic than those from the base game. I have a plan about these in any event.

I have lacked a degree of focus recently in that I have seem to have been flitting from one project to another without any apparent rhyme or reason but there is a plan of sorts in play! One of these that has been neglected slightly is of course the WW2 in the Pacific - specifically Burma or the islands around New Guinea. If you recall my original intention was to make use of the 14th Army figures from Eric’s collection and then to add some Japanese and US Marines. I fully intend to expand the action by adding the naval dimension using Avalon Hill’s Flat Top and possibly even taking to the air in some fashion.

A while back I picked up a copy of Conflict of Heroes: Guadalcanal bu Academy Games. This is a sumptuously produced tactical level board game that focuses on the fighting on the island during those critical months of 1942. It is a lovely looking game but I think I may have pulled the trigger too quickly when I acquired it. I may have been better getting Combat Commander: Pacific with the New Guinea supplement for a broader coverage as it not solely focussed on the US Marines. I was thinking about this when the answer of course came from a completely different direction!

Memoir ‘44 is a light WW2 themed board game that I have enjoyed countless times although it does lack depth. This can be rectified very easily and indeed, I know of many gamers that have done so in order to make it more ‘wargamey’. The first iteration I used of this was devised by Bob Cordery a few years ago and was called MOMBAT - Memoir Of Modern BATtle. I fought many great games using this system and tweaked it quite happily to suit my own requirements. I own a fair amount of Memoir ‘44 stuff but the me thing that eluded me was the expansion for the Pacific. I say eluded me because I did own this a few years ago but it went during one of my periodic reorganisations. In recent times it has been really hard to get a hold of and has advertised for silly money in places like eBay. 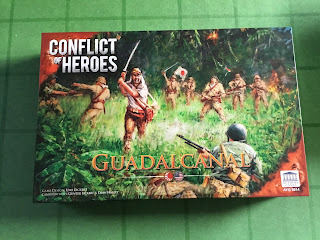 A lovely looking game and really well produced but sadly too limited in its scope for what I wanted. Its disposal has served to finance the replacement Memoir ‘44 pieces though so all’s well that ends well!

I saw a brand new copy of the Memoir ‘44 Pacific expansion that was listed on eBay at what I thought was a really good price - £25 - so I watched it and at the appropriate time slapped in a bid. I was absolutely gobsmacked when I won it and indeed, I was the only person that placed a bid despite there being some 13 watchers! I also ordered a copy of another expansion called Through Jungle and Desert which includes scenarios and special rules for combat in both environments. The Jungle part of this expansion features the British retreat through Burma which I am currently reading about so is a welcome addition to the collection - or at least it will be when it arrives! 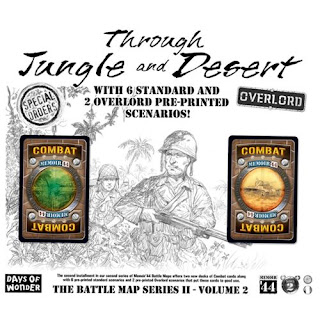 Aside from the scenarios and preprinted maps there are also some jungle and desert specific command cards which will be very useful.

In common with my usual hobby modus operandi I first of all disposed of some items to fund these two new additions (actually three but I will get to that in a moment) and so Conflict of Heroes went to a new home. It was a break even sale so no harm was done to the budget! 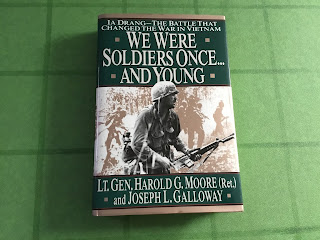 Whilst the film took a number of, ahem, liberties, the combat scenes were well done and even Hal Moore himself said that it was the first Vietnam film ‘to get it right....’

The final acquisition from the sale proceeds was a replacement hardback copy of We Were Soldiers Once....And Young by Lt. Gen. Harold (Hal) G. Moore and Joseph L. Galloway detailing the action in the Ia Drang Valley in 1965. I really enjoyed this book (if enjoyed is the right word) in that it gives a very good account of the brutal, close range nature of this battle and how it was fought. I have long wanted to game this operation in some form and indeed, I penned a blog past about some years ago. The Pacific expansion for Memoir ‘44 includes some very ‘Nam terrain types - caves, jungle, paddy fields etc - so there is room for a lot of crossover in terms of elements of the rules. Again, it is a project that I would enjoy doing that in theory would not take a lot to set up but for the present I would need to use proxies of some kind.

The film of the book starring Mel Gibson is a visceral experience once the shooting starts and really gives a harrowing impression of what a close in firefight using modern automatic weaponry must be like. There is a haunting Scottish lament that features in the film and it really plays on the senses.

Interesting timing David as I'm pondering dipping my toe into gaming the Malaya campaign and Burma, given I treated myself to a book on the Battle for Khalkin Gol, 1939. I know it's between Japan and Mongolia/Soviet Union, but the troops and armour can be used in the aforementioned conflicts. These hold more interest to me than the Pacific islands campaigns, which I find too limited in terms of challenges for a gamer, but that's just me. Also the above fit in with my interest in the early campaigns and battles of WWII.

The main attraction to be honest are the quirky Japanese tanks you can field with their wonderful camo schemes. I'm a sucker for stuff like this and it is enough to draw me into gaming a period, shallow knave that I am;)

So I look forward to seeing how your ideas for gaming the Pacific theatre progress and who knows, maybe one day I may even game an island landing etc.

To be honest the land side of Guadalcanal has not really cropped up due to my wanting to tie it in with Flat Top - which is the naval boardgame covering that side of the campaign. I am not so fussed about continual island hopping and indeed, will be exploring Burma.

Conflict of Heroes: Guadalcanal, whilst being an excellent game, was simply too limiting for what I wanted. For me it will be Burma and Guadalcanal but using a common system and besides, Chi Ha tanks versus Stuarts is always going to get my vote!

I would be interested to see what the Khalkin Gol book is as there is a Memoir ‘44 expansion that covers the campaign.