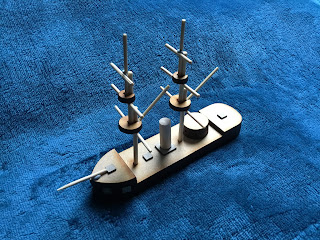 Nearly there! The overall sailing rig I am happy with although it is a little on the ‘heavy’ side. I have also yet to decide about fitting the top spars. The ‘heavy’ style of construction was for practicality as much as anything as it ensures that they masts etc are reasonably sturdy 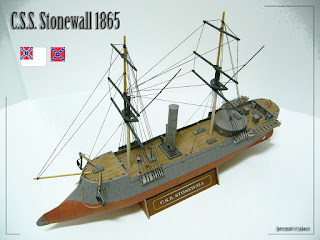 One of the two internet guides I used - this is a paper model, and very nice it looks as well! 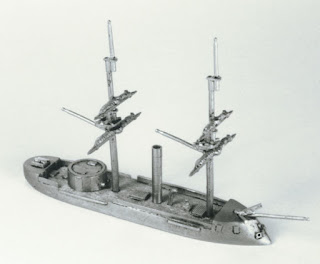 It has taken a little longer than I planned but I certainly did not want to rush the process! I have finally completed the four masts for the two Confederate ACW ironclad rams based loosely on C.S.S. Stonewall. These have been built with strength in mind so lavish quantities of glue and cunningly placed pieces have been the order of the day. They are not strictly accurate but certainly pass muster as looking more or less what they are supposed to.

The main differences - I am not going into fixtures and fittings etc and am only mentioning the big stuff - are the hull form in that I have not been able to represent the ram bow and tumble home of the original and the fighting tops are the wrong shape. These are larger than they should be as they play a clever role in adding strength to the whole thing as the spars are for most part glued directly to them as well as the masts. Once the mast assembly has been sealed prior to painting this will provide another layer of strengthening to the whole thing. The subsequent paint and varnish will also help.

I have used strategically placed Blu Tack for the photo shoot as some of the pieces will only be added once the hull has been painted. This includes the funnel, masts, ‘turret’/gun house and the bowsprit.

I learned a lot from making these masts and for sure there are a couple of things I could have done differently but it is all part of the learning process.

I have two of these at this stage of building and have decided that they will maintain their undercover names of Cheops and Sphinx. I have also taken the liberty of using the turret/gun house as a turret. The Confederates had ordered a pair of double turreted ships that became HMS Wyvern and Scorpion so my two ships really represent a hypothetical composite type that could have been built.

I can at last get these sealed and under coated prior to painting, along with the USS New Ironsides and the three turreted Roanoke - both of which I need to think of names for although the monitor will be the USS Potomac.

I shall be using the paper model colour scheme above for the two Confederate ships as well as the USS New Ironsides. The plan is to then build two other models - one for each side - so that I have a dozen completed and then the ACW will be parked for the time being. I shall return to it as I need to build around another dozen models but first up will be some models for Madasahatta.

I am really enjoying myself with this model making - it is hugely therapeutic!

Very nice models! Robust and recognisable for what they are ... steam-powered, sea-going turret rams.

I look forward to seeing them in action.

Many thanks old chap! I did have misgivings about the whole mast thing but I am glad I persevered with them. They were actually relatively straightforward although a little on the fiddly side.

Next up will be the sealing, undercoating and the painting and then - into action!

Thank you old chap! I have all the models sealed and will be undercoating tomorrow. I have the colour schemes worked out and am itching to get these into action! I also have to quickly build a couple of extra models so that I have the round dozen for the time being.

That looks great David and I'm very much in the durability camp when it come sto models etc.

I was worried about the masts and nearly went with a reduced rig but I am glad I persevered as several valuable construction lessons have been learned. There are few modelling problems that cannot be solved by the application of copious amounts of superglue and the occasional choice Anglo Saxon expletive!

All the models are now sealed and will be undercoated tomorrow so all being well this weekend will see the painting tackled.

It has come up rather well and I am pleased with the overall look. The original ship was very attractive looking - a great combination of the old and the new.

On with the painting!