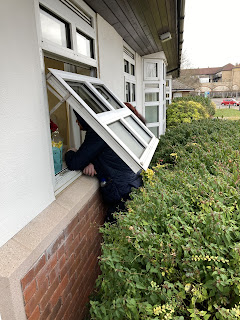 No, not an attempted break in - my son and daughter conversing with their mum courtesy of a hospital window visit - note the intervening foliage, so dense I am sure David Attenborough would have a field day investigating it!

The 13th of February was Laurel’s birthday and also our wedding anniversary. Today is of course Valentine’s Day and tomorrow, the 15th, is the anniversary of when Laurel and I first met back in 1980. February then, is veritable smorgasbord of special occasions.

This year was a little different due to Laurel still being hospital but it did not stop the three of us visiting her with a cake, cards and presents. It was the first time I had seen her since Sunday 30th January just before my bout of Covid. For my son and daughter it was the first time they had seen their mum since the 16th January for my son and the 18th January for my daughter due to the isolation requirement prior to Laurel’s surgery. It was a long time for me and even longer for the two of them.

The centre she is at are not allowing visitors in the building due to Covid but are happy to allow what they call window visits. As you can see from the picture above this was less than ideal for a number of reasons but we overcome the difficulties and managed to spend a couple of hours with Laurel after negotiating a series of bushes (including a particularly thorny rose bush), trying to keep out of the freezing wind and accompanying drizzle.

It was an emotional visit for all concerned but we all felt much better for it afterwards and of course the boost to Laurel was immeasurable. Her phone was ‘pinging’ non-stop with friends and family sending their love and best wishes and she had also had numerous calls as well. Laurel is improving by degrees and her feeling in the surgery affected areas is gradually returning but she still has some way to go. We are meeting on Thursday with the physio, an occupational therapist, a Pathway representative and a nurse to discuss progress so far and the plan going forwards which is a positive step for sure. One of the nurses blue tacked all her get well and birthday cards on the wall of her room which made for a cheery display.

When we finally said goodbye and headed home my son got an Indian takeaway for our dinner as a treat and afterwards I sat down to the Good, the Bad and the Ugly in a far more relaxed frame of mind having seen my wife at long last looking rather more upbeat than previously.

She is getting there, albeit perhaps not as quickly as she would like!

That's an uplifting post David in very difficult circumstances. Glad to read that you are now over the covid isolation and that Laurel especially is slowly getting there. What a way to spend a Birthday/Anniversary! Best wishes to you all.

That's a reassuring post - good stuff, and extra brownie points for having to negotiate the NHS jungle to reach the Visitors' Window.

All the very best to your wife and the whole family.

Despite the freezing cold and drizzle, not to mention the marauding topiary it was a good visit and gave a much needed to boost to us all - especially Laurel. She has a way to go but is making steady but slow progress.

I am tempted to take some pruning shears and tidy the whole area up (naturally invoicing the NHS for a full landscape gardening service complete with a crew of ten men - seems to be the norm in certain quarters…..) but you can manage to squeeze in. Mind you, with three of us peering in the window it was a little, how shall put it? Cosy, to say the least.

All in all though a good day.

Good news all round then Dave!

It was a welcome boost for everybody especially Laurel. She is definitely making progress albeit gradually.

Happy anniversary and great that you were all able to visit Laurel on her birthday, even if you were not allowed in the place. Certainly a boon for all involved and I'm sure for Laurel, who must feel like a bit stir crazy by now. Recovery does take a long time but I always tried and look back to what I could do compared to the previous week. Little steps each day and suddenly you are quite a way on the road to recovery.

Thank you old sport! She has been climbing the walls (metaphorically that is) as she had no visors for her last week at Queens Hospital due to me testing positive and obviously no one for her first week at the rehab centre as we were all isolating. She certainly is a lot more like her old self and let us hope this continues along with her progress. I am sure there will still be bad days along with the good but at least it is all heading in the right direction.

Encouraging news to hear indeed.
Really great to see the photo and hear such visiting allowed.
Congratulations to you both!
Rapunzel, Rapunzel, let down the window catch…

Love to your family David
All the best

That must be so difficult not seeing Laurel for so long. Pleased that it was beneficial for all.

Congratulations on your anniversary! Feb is the same for me and the Margravina - anniversaries of meeting and getting married were last week. We wargamers must be romantic souls 😆

Thank you old chap - much appreciated. Sadly it was not Rapunzel but one of the nurses but I like the notion in any event!

You are too kind old chap - many thanks!

I have always said that true wargamers are romantic souls. My congratulations to your good self and the Margravina!

It was a great day and good for us all - especially Laurel and the children (aged 33 and 26 respectively!).

Well…
Hurrah! Hurrah! And Hurrah! Again David…
A window visit is certainly better than no visit at all… an excellent initiative from the hospital… regardless of the weather.

It was lovely to be able to do this and all of us benefitted from the visit - Laurel and the children especially. We feel very much as though a kind of tipping point has been reached and Laurel’s progress seems to be gaining a degree of momentum.

Glad to hear things are improving any visit is a great benefit .

Thank you old chap! It is all about slow and steady in the recovery stakes but the overall trajectory is definitely upwards. The visit was certainly a tonic for all concerned and hopefully the review of the restrictions in place at the hospital scheduled for Thursday will mean that visitors are allowed in the building rather than fighting through the bocage!