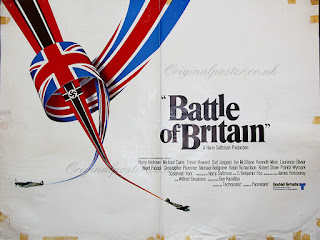 It may not have been the most artfully acted film ever made but bear in mind this was all pre CGI and at one point the film unit owned the world’s 35th largest Air Force! For me it is up there with Zulu, Waterloo and Lawrence of Arabia

One of the films that has had a huge influence on my gaming career is the 1969 offering of the Battle of Britain. As a young boy of the Airfix and Commando Comics generation and with an Uncle that was a Wellington bomber pilot during the war it was fair to say that I was RAF obsessed and I was desperately keen to see the film when it was released to my local cinema on the Isle of Sheppey. Funds were tight so an old school friend and I contrived to sneak into the cinema via the fire escape in the car park. This we managed with no problem at all and I remember being very nervous about being caught (there were only about half a dozen people watching the film) and absolutely enthralled by the film.

One of the things I am looking forward to tackling using the Wing Leader: Victories board game are the many Battle of Britain based scenarios. There is plenty of choice - Stuka raids, fighter sweeps and bombing raids with all the usual suspects from the era - Spitfires and Hurricanes, Bf109, Bf110, Ju87, Heinkels and Dorniers. I believe that Defiants feature in an expansion but would have to check.

By way of research I decided to take a quick look at the relevant section of my library with a view to reacquainting myself with the events of summer 1940. So without further ado, here we go. 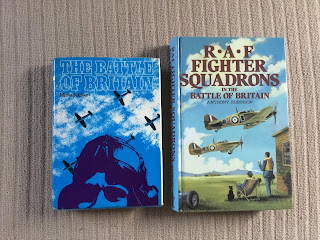 Both of these are boot sale bargains. The Battle of Britain is interesting in that it was written by a Frenchman at the behest of the Air Ministry. It is quite anecdotal in approach and features the German view point as well. R.A.F Fighter Squadrons is a cracking read and concentrates on the squadrons individually and in some detail. I was interested to read about the trials and tribulations of No. 19 squadron testing the cannon armed variant. 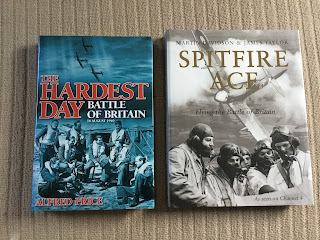 The Hardest Day is one of my favourites as it covers a single day of operations from both sides and features some cracking ideas for scenarios. Spitfire Ace is the tie in to the Channel 4 documantary of the same name. 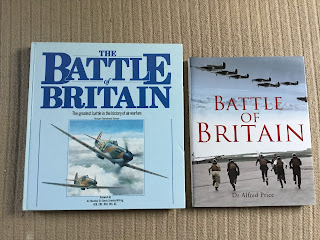 The book on the left, originally published by Salamander, is pretty much a ‘coffee table’ book but is useful for the diagrams of tactics etc as well pictures of artefacts etc. The book on the right is rather more detailed but more of an overview. 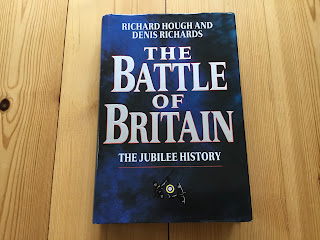 At the moment this is my ‘go to’ history and is a great account of the overall campaign. 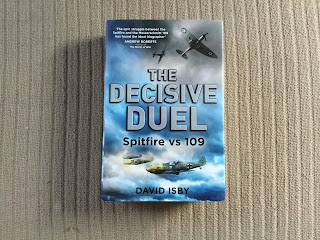 Not specifically about the Battle of Britain although naturally this does feature, The Decisive Duel traces the development, evolution and operational use of the two protagonists throughout the war years. It is really good book for knowing what it must have been like to fly either plane. 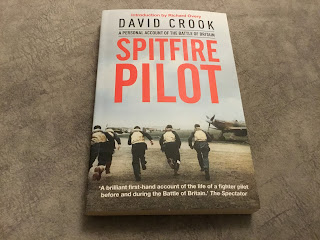 Finally, and with grateful thanks to the redoubtable Mr Fox, a personal account of the Battle of Britain - and no, he was not a relation!
There are many other books about the battle and indeed, Mr Fox mentioned a recent Osprey title I shall need to keep an eye open for as it covers events from the German side. I remember reading The Last Enemy by Richard Hillary which was a moving experience as he described his shooting down and recovery from severe burns - a fate not uncommon for a fighter pilot, sat as they usually were on or around close proximity to a fuel tank.
I called this post One of the Few as for me this is one of the few films I can return to again and again - any resemblance to the famous speech by WSC is coincidental and not intentional. Well, maybe it is….

Like you I was in the queue to see the Battle of Britain when it was first released. I was an Air Cadet at the time and the local squadron organised a trip to Manchester to see the film in the first week of release. Despite the flaws it is a stunning film and when I bought the DVD a few years ago I was enthralled by the accompanying DVD on the making of the film. The air battles were choreographed by the pilots walking around in a hanger with model planes on sticks! with a Mitchel bomber flying through the middle of the actual aerial scenes to do the filming. talk about nerves of steel!

For all its shortcomings it is a cracking film and one that for me is right up there with Zulu and the Great Escape in terms of repeat watching. As I recall there is a book around about the making of the film and I have also seen similar for Zulu and more recently, for Waterloo.

I am also a sucker for the whole ‘how they did what they did’ style of documentary!

I have a feeling that is why the Mitchell camera plane was painting in a loud colour scheme so as to more readily visible - during the war I am sure the USAF did something similar to act as forming up points for the formations - rather like a standard bearer (and just as risky!).

Yeah, I suspect this film was the first thing that got me excited about all things military. My uncle was a pilot in the war and used to make veiled references (not actual stories) to having flown in the Battle of Britain. About 15 years ago he passed on and I stopped an extended family member from chucking out his flying logs. Turns out he didn’t start flying until 41 and then spent a year training in Canada before being sent out to India in 43. He spent his war ferrying planes and doing meteorological flights rather than battling the hun over Kent. He did fly a lot of interesting types though - from Hurricanes to a four engined Liberator but I guess the other version of events got him a few more free pints down the pub. Lol.

Like most ‘popular’ battles there is a vast amount of written material on the subject in hand. Where possible I try and keep a lid on it and be a little selective where I can. Of the titles you see one was a donation, one was a given to me as a review copy (The Decisive Duel and my review is on Amazon for it!) and four others were from boot sales.

They will keep me out of trouble…for a while!

My Uncle Jim’s flying logs are still in the family but he was vey much of the ‘writing the absolute minimum required’ school of officialdom! He served in number 9 squadron in Wellingtons and completed 29 out of 30 ‘ops’ before being transferred to training command and then taking off flying. By then his nerves were shredded and he was taken off flying and assigned to Malta as a senior admin/records type.

We understand about PTSD a lot more now but whilst he was recovering in a military hospital after his 29 ‘ops’ he was sent a white feather. In later life is was constantly moving and could never sit still for long. He was a hero to me though.

A very good selection of books there David and of course the film is great. It might not be too accurate but who cares when you can just sit back and enjoy!

I enjoyed Len Deighton's 'Fighter' for a very basic overview of the campaign, which is fine for me. Apparently Adolf Galland's memoir is meant to be a great read and of course a view from the other side.

‘Sit back and enjoy’ - that is absolutely right! The film gives a good overall flavour of the fighting and that is enough for me.

By all accounts Galland was quite a character so his memoirs should make for a good read.

There is still some work to do before anything gets to the table with this but it will make for a pleasant diversion methinks.