An ancient and battered copy of the game Conquest. 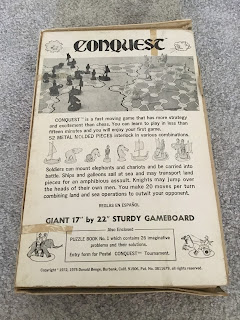 The back of the box showing the components.
This is very much a ‘seems like a potentially good idea’ kind of post or in other words a bit of a meander! Mark Cordone has been very busy on the Facebook Portable Wargame group with all manner of inspiring ideas. His latest involved using the pieces from a Chinese Chess set to represent a couple of armies and seeing this got me thinking along similar lines from my own collection. 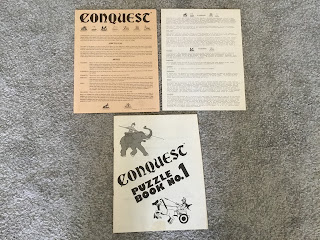 The rules and the puzzle book
Some years ago I picked up from a boot sale a copy of a 1975 edition of the board game Conquest designed by the late Donald Benge. The game is complete although the box is battered, the map board is about to fall in half as well as being stained around the edges but, crucially, all the 52 playing pieces are still present. The game contains the rules - in English and Spanish - and a book of Conquest based puzzles, rather like those one sees of chess problems. 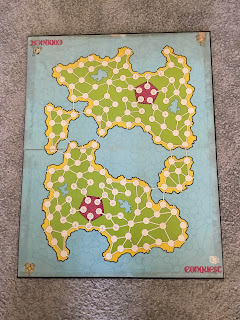 The map board. Movement is from point to point and this would be ideal for using on a campaign basis methinks!
Conquest is a point to point abstract game with no dice involved and has been described as being ‘chess like’. I used to play this a lot in the late 1980s with a version of the game that allowed for four players rather than the two in this one. It is great fun in an abstract sort of way. 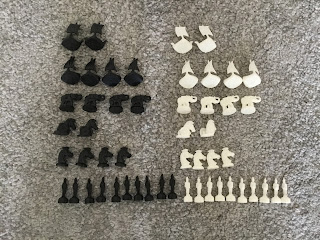 The game pieces moulded in plastic.
The pieces are stylised and functional and could certainly work within a conventional wargame if one was not too particular. The ships, elephants and chariots can all carry infantry figures and the object of the game is to occupy and hold the five spaces of the opponents capital. Each turn a player has 20 movement points to use as he sees fit (all units have a maximum movement distance dictated by the type) but the loss of each space of the capital reduces the number of movement points by 4. Opposing pieces are captured by  moving onto their space and removing them as in chess. There are various permutations around this, again depending on the attacking type opposed to the defender. Opponents can immediately recapture a lost piece as long as the target space is within two spaces.
As a game Conquest is very entertaining in a chess like way and the pieces could be readily used for something like the Portable 3 x 3 Wargame if required. The map could be used as the basis for an ‘imagi-nation’ style campaign of some kind for just about any historical or fantasy style setting.
Certainly something else to think about for sure.
Posted by David Crook at 08:00

I don't remember ever seeing this game before - very interesting, thanks for sharing this.

It was quite good fun to play in an abstract sort of way. There is an expanded version that not only features four players but also includes siege weapons. Another variant allowed for playing pieces to move ‘off the points’ and into the surrounding area.

The map has a lot of potential for a mini campaign of some kind. Having spent some time having a good look over it I am tempted to see about sourcing another (and better) copy at some point.

Sadly the designer was killed in a road accident and so the concept ended as I do not believe it has been taken up and developed further.

It is a good game for sure although this copy has certainly seen better days! (A bit like us really….)

That looks like a fun game, and the pieces look tailor made for 3x3 games. I don't remember ever seeing that game when I was younger, I wonder about its availability here in the states.

It was originally produced in the USA and my copy is described as ‘copyright Donald Benge 1972 Burbank, California. The later versions look far better - the four player version especially - and to be honest it s a fun game to play in an abstract kind of way. I am sure that it could be made more historical with a little effort.

That’s a cracking looking game David…
I have never come across it before… it’s certainly the kind of thing that would have caused much entertainment and probably arguments in the Morrison household….

It is a lot of fun in an abstract way and the expanded version added an additional two players as well as siege equipment.

Monopoly tends to do that in our house!