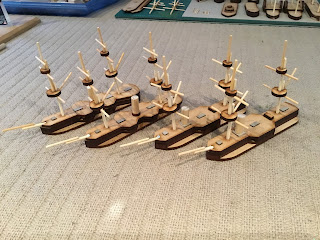 Four completed Turkish ironclads awaiting sealing, painting and the final assembly. The models are based on the Avnillah (the two models on the left) and the Feth-i Bulend (the two models on the right) classes. The masts, bowsprits, funnels and the main decks are not glued in place simply because it is easier to paint them first. I have also trimmed 1/4” off the bowsprits as they were a little on the long side!

The four Turkish ironclads are now built and I am leaving them for the glue to harden off overnight prior to sealing, undercoating and painting. I am rather pleased with them and whilst they are being painted and the two river monitors are being refurbished I shall give some thought to some Russian opposition.

For the most part this will be assorted armed merchantmen and a bevvy of torpedo launches - ultimately I shall be building the pair of circular ironclads for the Russians as well as the Turkish ships captured and pressed into service.

On the face of it the naval situation in the Black Sea during the war of 1877 was, on paper at least, very much in the Turkish favour. The Turks enjoyed a hefty superiority in terms of warships so I may well allow the Russians to add a few additional units to their order of battle. I am currently thinking of a back story for this that could be viable and will post once I have done so. The Royal Navy may well be involved but I will leave it there for now. 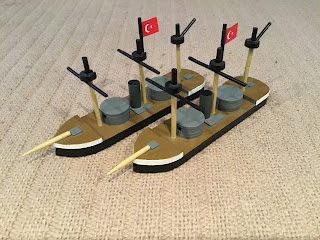 I originally built these with a light pole rig but am now going to reinstate their full sailing set up - simply because they will look better and will be more in keeping with the newer ships.

The two ships you see above are a pair of river monitors of the Luft-u Celil class. These were built vey early in my shipbuilding career and perhaps unsurprisingly are now not of the current build quality. I am going to decommission them to rebuild them to the current standard. They will not require a vast amount of work (at least now that I have worked out the best to tackle it!) and the end result will mean that the whole Turkish fleet built thus far will be of a similar standard.

Some excellent additions to your growing fleet! Let’s hope that they see some action soon.

Cracking stuff there David and look forward to seeing them painted. Plenty of 'what if?' type of actions in the Black Sea I think, just for the sheer fun of seeing the RN battling the Russians and dastardly Turk;).

Many thanks old chap - it was good to get back to making something again!

Once I have a couple of Russian AMCs built then the fun can begin. I have some more elaborate plans for later with the collection but for now small scale stuff will be the way to go (as it was historically).

It did feel good building again though!

Thanks old chap! The challenge for me is how to beef up the Russians in the Black Sea. The RN would be fighting with the Turks in all probability but by keeping their numbers small it will mean that the RN will not be all powerful. I have a couple of ‘what if?’ Ideas I am playing around with to flesh this idea out (and to give me the excuse to build some more ships of course!) and rest assured I will post these via the blog.

It’s good to see that the shipyards are back in production David…
Lovely looking models indeed.

They look great - a very clever design and I should think quite quick to put together once all the parts have been designed and produced.

I cannot begin to tell you how glad I am to be back knee deep in MDF, bamboo skewers, cocktail sticks and super glue! As is my usual modus operandi with these models these are certainly not scale specific as they will be of a similar length to the Turkish Messudieh - to be anything like in scale they should be roughly around 1 1/2 inches shorter so Messudieh would be 5” long and this lot 3 1/2”. Having said that I tend to exaggerate the vertical for bigger ships to maintain a semblance of size differential.

As my rules are grid based then such niceties as scale are largely irrelevant and besides, they look far more imposing methinks!

Handsome looking ships there mate. How many are you going to do?

I intentionally made the hull shapes simple for the ACWs but for some other ships (like the ones depicted) I needed to get some bespoke pieces cut. Having a standard template to work from makes life a lot easier although it does sacrifice historical accuracy. These are just layers of MDF with a few pieces of deck furniture, funnels and masts - the latter are really easy to put together now that I have the technique off pat.

With the right raw materials to hand it is possible to build representative ship models really quickly. I have cheated slightly for this period and have assumed that all steam and sail types are relying solely on steam - this saves messing about with sails although I will need to think about that for when I look at the age of sail.

That is a moot point. I am planning half a dozen Turkish ironclads so the four above and two others. I will then have around half a dozen Turkish river types to build. The Russians will be about the same although there will be a gaggle of steam launches carrying spar torpedoes and of course a pair of circular ironclad gunboats.

Allowing for just about everything the entire collection (which will also include a Royal Navy squadron will be around 30 models or roughly half the size of the ACW.

These are really super looking models. Just how big are they actually ??? Regards.

Many thanks old chap! These models were built using my largest hull template which is 5” by 1 1/4” at the waterline. As I use a grid based system for my games the actual sizes are not really that important although where possible I do try and incorporate relative differences between types. Another method is to make larger ships taller - a method that Bob Cordery used to great effect with his ‘cartoon style’ ship models.

Although ‘models’ with the overall look of the thing they are really just gaming pieces hence the simplified approach to building them.