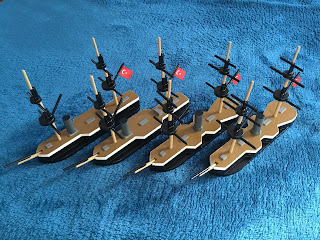 The first of the Turkish ironclads. I have a couple of Russian armed merchant cruisers currently under construction by way of some opposition. Historically these were used as tenders for spar torpedo launches, minelayers and also to draw Turkish ironclads away from shore bombardments etc. Very much ‘shoot and scoot’ type operations.

It was a strange day yesterday. I felt particularly lethargic and it was a real effort doing anything let alone painting models but I gave myself a gentle nudge and pressed on and I am glad that I did. At the time of writing I am still testing positive but today, aside from a nagging and irritating cough I feel relatively normal.

I finally finished the four Turkish ironclads and I have to say that I am rather pleased with how they came out. As usual they are very much ‘based upon’ rather than super detailed scale models but for my purposes they will work quite nicely. Whilst I was working on these I gave some thought to the opposition and so have taken a couple of hulls from the ACW ships currently under construction and will repurpose them into Russian armed merchant types. When my Warbases order arrives I shall be able to build the other two Turkish ironclads which will suffice for the collection although I could easily build another four! 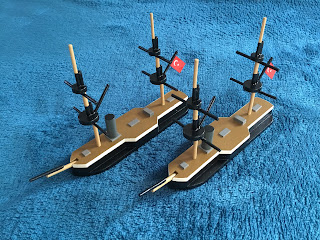 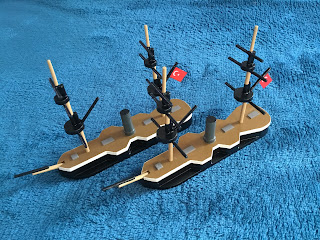 The Avnillah class of central battery ironclads - note the cutaway section in the casemate to increase the fields of fire. Both ships were built on the Thames and the other of the class was the Muin-i Zaffir

The models were built using my tried and tested MDF laminate technique - in this case four layers each of 3mm thickness. Deck fixtures are mostly card except for the funnels that are dowel rod cut to size. Masts are from bamboo skewers with cocktail sticks for the spars. Paint was a mixture of Humbrol enamel - and Vallejo - Iraqi Sand for the masts and Black for the hull and spars. As per usual I opted for a satin varnish as this gives a suitable ‘old school’ appearance and is in keeping with the overall ‘look’.

On the face of it the Russo Turkish War does not really have a lot to offer. Historically the Turks had an overwhelming superiority in terms of material but for the most part the overall command of the fleet was poorly handled and listless in operation. The Russians were quickly able to seize the initiative along the Danube, thereby ensuring that the armies movement was not overly inconvenienced. The various extemporised cruisers the Russians employed, whilst not being a match for the Turkish ironclads in a stand up fight, were able to operate effectively across the Black Sea with little interference. They did cross swords occasionally and one such incident will feature in a game as soon as I have built the Russian ship in question.

Whilst I was building these models and indeed, also the ACW collection my thoughts naturally turned towards the other periods of history that I could produce stylised models for. If I am honest I reckon that the pre-dreadnought era would probably be about as late as I would go for capital ships although certain facets of the Great War would certainly be achievable. The problem as I see is that when one get to the dreadnought era warships become a lot more ‘fussy’ in terms of above deck detail. My approach would probably not be flexible enough to capture this adequately. The type of combats I will be fighting tend to be at closer ranges so dreadnoughts hurling 15” shells at 20,000 yards does not really sit well with my system. Besides, there are plenty of cheap, commercially available smaller models to cater for these types of combat.

Thinking of the Great War and models thereof, I envisage primarily cruiser types being the main arm and these would be in certain cases very much the edge of the envelope for what I can build. Something to ponder for another time I should think.

They look great David and your simplified old school aesthetic works a treat IMHO. Sorry to hear your still testing positive and a tad under the weather. SWMBO and myself felt tired yesterday for no reason at all. A good nights sleep would make a huge difference of course as something keeps waking me up around 4.00am:(.

Thank you old chap - much appreciated. In my mind’s eye these models are very much a naval equivalent of the old style soldiers manufactured by Britains and similar. They look the part and are visually very effective when used in action.

I am feeling a lot better today aside from the lingering cough and the positive test is a bind for sure. I hope you and SWMBO manage to get some sleep - if I have learned anything over the last couple of months it is the value of a good night’s slumber!

Hi David -
Bad luck on the positive tests for COVID - a gift that keeps on giving it seems. Hope it all passes off soon.

I like those Turkish Ironclads. Quite an elegant design, and would look spectacular as a war game.
Cheers, and get well soon -
Ion

It is funny, over the weekend I really thought I was over the worst of it but yesterday was an unexpectedly wearing day. I had no energy and was lethargic and listless for most of the day. I rallied a little in the evening and so was able to finish the four ironclads.

I am rather pleased with how they have turned out and will certainly be adding to the collection. The plan at the moment is to go to roughly thirty models in all - half the the size of the ACW collection - and this will include a Royal Navy squadron. There will be an element of alternate history involved, if only so that the Russians have a fighting chance!

The Turks had some good ironclads in the 1860s and 1870s - the only trouble was that many of them were still around some fifty years later, albeit ‘updated’!

Others have said it before, but I’ll repeat it: you have come up with a great design concept for ship models in this period. Nice work!

And take it as easy as you can old chap. It takes longer to get over illness when you get to our age.

I honestly thought I would be over it by now but it seems to be lurking with intent. You are right about the age thing though despite still feeling like an 18 year old!

Sorry to hear you have been a bit crook Mr Crook (come on, someone was going to say it so It may as well be me)! Hopefully you are all vaccinated and It hasn't been too unpleasant an experience. As others have said take it very easy, rest as much as you can and do as much or as little modelling as you feel able. These latest MDF ironclads are a very elegant design solution and really do look nice.

You are the first old chap to take a bow! I have tested positive again this morning so now ten days straight. Mostly has felt like a chesty cough/cold although I have had days where I have simply had no energy. For the nth time I really pleased to be working from home! I seem to be quite short winded in that my attention span is variable.

Thank you re the models - I get a huge amount of enjoyment designing and building these and the games are an added bonus!

Your are far too kind old chap - but many thanks all the same!