Some rather dashing Turkish troops from the war of 1912

This was a game of pure self indulgence and was prompted by a recent and very thought provoking blog post from Ross Mac - Zulus and the ACW. I will elaborate further on my take on this later but for now, on with the little known battle of Oturankotu during the Balkan War of 1912.

The Bulgarian advance across European Turkey continues and the on all sides the Turks are being either outflanked, overrun or simply annihilated. A hastily assembled Turkish force has been tasked with holding the bridge in the small town of Oturankotu against a superior Bulgarian force to enable the Turkish command to redeploy some badly needed reserve 'Redif' formations. It was hoped that by doing so the front could be stabilised. In the meantime the Turks were ordered to hold until nightfall (game turn 16) or failing that, to prevent the enemy crossing the bridge.

The Turkish force was well equipped but short of manpower and comprised the following:

29 strength points with an exhaustion level of 14 - the troops were for the most part in cover and ordered to hold, indeed die where they stood.

51 strength points with an exhaustion level of 17.

The action was fought using the basic first edition Battle Cry rules but without command cards. Each side had 4 actions or activations a turn and this is varied by the roll of a d6 at the start of the players turn - a roll of a 6 adds another activation whilst a 1 reduces the score from 4 to a 3. All ranges and move distances are as per the rules with the only addition being for machine guns. I have treated these in the same way as artillery - strength two and hit on an artillery icon. They roll the same number of dice as an infantry unit, that is  4, 3, 2 then 1. 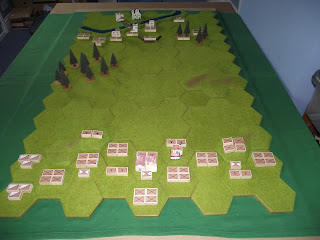 The Bulgarian starting positions - the small town of Oturankotu is in the distance. 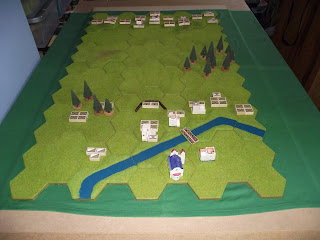 The Turkish deployment - note the carefully sighted artillery in the central redoubt and the concealed machine guns in the left hand woods and the extreme right hand building. 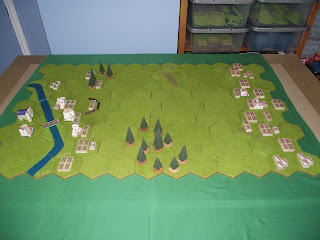 The overall position at the start of the action. The Bulgarians are massed behind a serious of low hills and a small hamlet. Their artillery is massed in the centre, out of range of the Turkish position 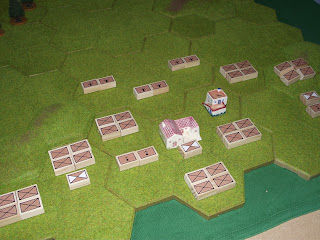 Turn 1 - The Bulgarians artillery advances supported by their infantry. 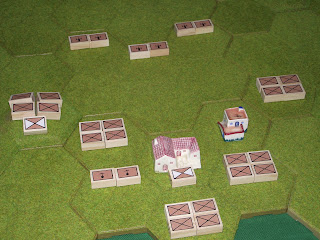 Turn 2 - The Bulgarian artillery outdistances its infantry but as yet the Turkish make no response and are content to be mere spectators. 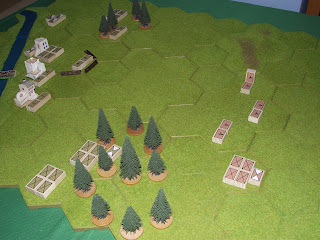 Turn 3 - The Turkish artillery draw first blood against their opposite number while half their infantry advances to secure the outlying woods. 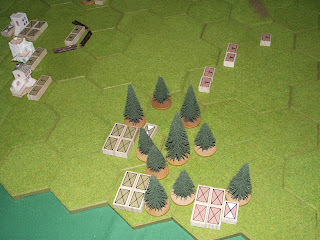 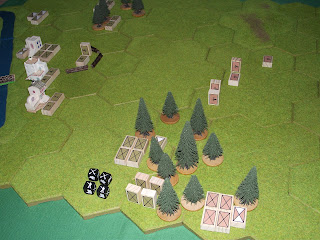 Turn 5 - Disaster! The Bulgarians attack the Turks and score a telling victory whilst the Turkish artillery exchanges salvos with the Bulgarians, inflicting severe damage and reducing the enemy superiority. 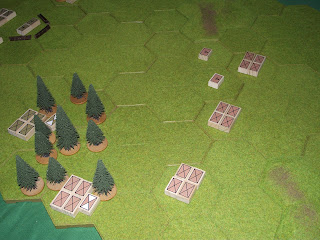 Turn 6 - The Bulgarians strive to bring up their infantry whilst their battered artillery attempts to fall back and regroup. 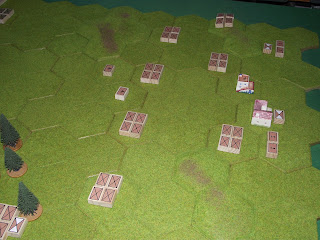 Turn 7 - The rearmost Bulgarian units hurry to align themselves with the advance formations to resume the attack. 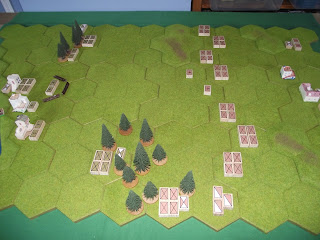 Turn 8 - The Bulgarians look to secure the wood to use as the jumping off point for an assault against the town. 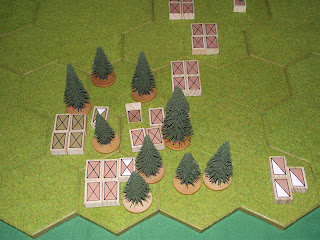 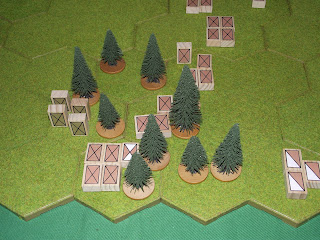 Turn 10 - With the Bulgarians in hot pursuit the Turks attempt to retreat from the wood but are cut down by concentrated  rifle fire. 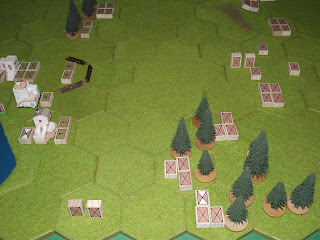 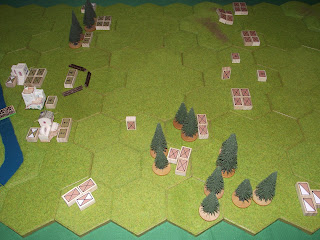 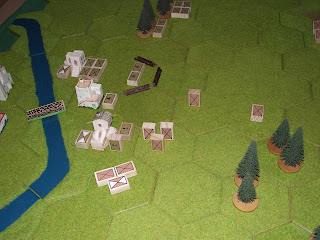 Turn 13 - Despite inflicting damage on the Turkish machine gun the Bulgarians suffer severely in return. 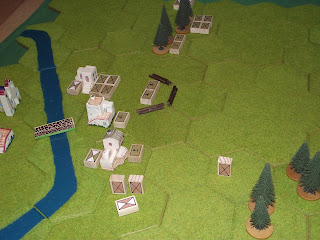 Turn 14 - With urgently stuttering machine gun fire and rapid firing artillery the Turkish troops finally succeed in driving off the Bulgarians, thereby securing the town and bridge for the day. 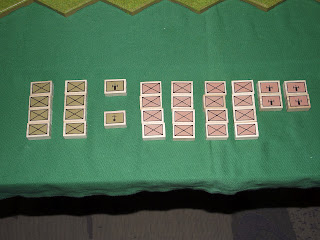 The final score - despite heavy losses the Turks just about managed to hold on to the position but could not expect the same good fortune should the Bulgarians repeat the attempt.

I really enjoyed this game for a number of reasons. To begin with it was good to revisit the Balkan Wars again and I fully intend doing so in a more formal campaign style setting in due course. It was good to use machine guns for the first time and treating them as infantry for firing and artillery for movement and as a target (being hit by the artillery icon) felt about right. The Turkish machine gun deployed in the building was quite a tough target to neutralise and was very effective. The varied command point idea worked well although I may well experiment with a little more extremity for variety - perhaps having rolls of 1 and 6 giving a plus or minus 2 points.

The point I made earlier concerning Ross Mac was that his post really got me thinking about the fun and abstract factor of Battle Cry and why it works so well. With the exception of the machine guns the game was  essentially an ACW one but, and this is of considerable importance to me, it felt like I would have imagined a Balkan War battle should have felt like. I suppose that the point I am trying to make is that the game works in such a way that the tools used with it are very much in the eye of the beholder - it could just as easily be used for anything 19th century and even up to and including the Great War.

I know all this is probably obvious but sometimes being reminded of the fact helps to reinforce this so many thanks to Ross for helping to add a little clarity of thought to my perennial tendency towards 'over thinking'!

Interesting Battle. I am, at present, on the cusp of buying Battle Cry because of you, Ross Mac and Bob Cordery. It is the new version, not sure if that makes a difference.

Never played any Balkan Wars games or even seen any figures for them as a matter of fact. But I guess that's another good thing about your bases, they can be Turks one day and British the next!!

The new version has better figures and a lot more scenarios but is more or less the same as the original. I believe there are a few card differences but that is about it - I dare say somebody will correct me on that though!

In its own right it is a great game but the extra potential of the system makes it a really worthwhile acquisition.

That is the beauty of the system as the blocks can be used for whatever army takes your fancy.

This is very important for my somewhat whimsical approach to military history!

A great scenario and battle report!

I think that your idea regarding replacing the Command Cards with a simple dice throw for solo games is an excellent (and very simple) device ... and I may well copy it!

Many thanks old chap! I will experiment further with the command point/dice roll adjusted idea but thus far it seems to work well.

The game played at a fast pace and with a little more thought the Bulgarians should have had a much easier time of it!

Machine guns worked well so I was pleased with the outcome overall.

DC, As someone who tends to over think things myself, I'm glad if I was able to help a bit.

I think what you say about how you imagined a Balkan War game is an important bit. Simple but effective rules allow and enable us to fight the battles the way we think they should be rather than forcing us to do so.,

Having thought about this at some length I am rapidly coming to the conclusion that as long as the visual appeal and the 'feel' of the game is right - in the eyes of the beholder - then the rules are merely a tool to help with that. Perhaps the problem lies in the gamer's perception of expecting a given set of rules to be closely tied to the period being gamed on the table when in reality, as a game of war, it is not strictly essential. Only significant differences need be incorporated if at all.

Many thanks for your post and mental prompt Ross, much appreciated as it confirms I was taking what is (probably0 the right overall approach for (possibly) the right reasons!