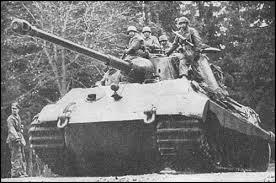 If you go down to the woods today....No introductions necessary for this one but I suspect you would not want to be on the business end of it!

Hot on the heels of my recent 'Hell's Highway' - Operation Market Garden based Portable Wargame I decided to strike whilst the creative iron was still hot and follow up with another game, this time set in the Ardennes during the Battle of the Bulge. In many ways this is similar to the previous scenario although in an expanded form - especially in respect of the hardware on show. I also wanted to try the Portable Wargame: Modern rules out on a 12 x 8 grid and to try something out in connection with artillery. I felt that indirect artillery was a little too flexible in the last game - changing targets seemed a little too quick for my taste - although the effect in action seemed absolutely right. What I have come up is to only allow indirect fire if at least one friendly unit has a line of sight to the target. I realise that blind or map fire was used but I wanted a measure of control over the use of it. So, in a nutshell: Indirect fire is only permissible when a friendly unit has a line of sight to the target - bear in mind that a 'target' can also be a terrain feature.

As per usual, the artillery strikes are marked by a white 'Mastermind' pegs and destroyed units are tipped upright prior to being removed.

I should also apologise in advance for the somewhat verdant nature of the battlefield - sadly the only winter terrain I possess is the Memoir '44 snow covered battle board!

34 strength points with an exhaustion level of 14

The 'Elite' troops are of course SS with the armour representing King Tigers. The 'Poor' leg infantry are Volksgrenadiers. 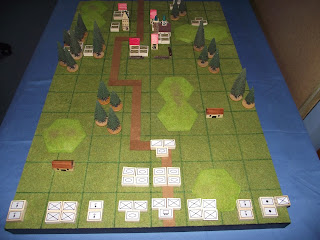 The German initial positions. Note the armour massed in the centre with the flanking infantry and support. An armoured reconnaissance unit leads the way - hopefully to Antwerp!

32 strength points with an exhaustion level of 16 - again, hanging on for grim death.

All the US troops are rated as average - primarily because of the variety of units forming the defending force. 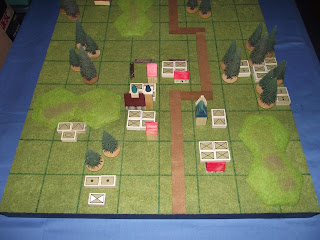 The American positions. The artillery is well to the rear and the wood to the right is strongly held by infantry supported by a mortar and a machine gun and is covering the main road. Note the SP AT unit behind the hill on the left.

The US forces were aware that the Germans had launched a massive offensive spearheaded by elite panzer troops but the allied response, although sluggish, disjointed and haphazard, was managing to gradually draw the sting from the attack. Countermeasures were in hand and so any delay to the German attack could only serve to help the inevitable Allied counterattack.

The German infantry would be easier to defeat as opposed to the armour as once the air umbrella was available again the tanks would be fair game for rocket firing ground attack planes. Isolate the tanks and defeat would surely follow but holding a (King) tiger by the tail is an occupation fraught with peril.

The German offensive was initially successful but gradually stiffening resistance and critical fuel issues meant that  attacks that ordinarily would not have been considered were forced upon the leading units in order to maintain the momentum. Tactical subtlety is now at a premium and so 'blitzing' strong points that would normally be bypassed and mopped up later at leisure is an unwelcome imperative if the offensive is ultimately to be a success.

A short, hard thrust through the centre of the American position, relying on the awesome  power of the King Tiger, should be more than sufficient to force the issue. It was a gamble, but by this stage of the war, more and more of the directives from Berlin had the hallmark of being all or nothing or even double or quits. 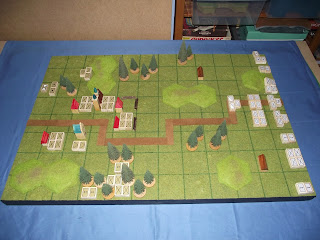 The overall starting positions using a 12 by 8 grid. The Hexon hills treat each square they occupy as being hilly so the single version covers 4 squares, the twin 6 squares. I will probably make some square hills in time but reckon that these look pretty good in the short term. I also took the opportunity to go over the grid lines with a green permanent market in order to make them more prominent. No snow though....;-) 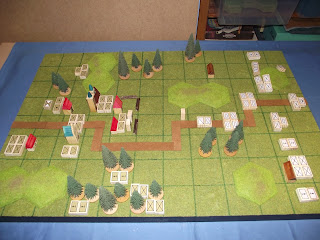 Turn 1. No artillery fire so it was straight into the move. The German advance commences (led by the armoured recce unit in the van of the Panzers) whilst the Americans are content to await developments. A brisk exchange sees the Americans take heavy casualties whilst the German armoured cars are forced back. 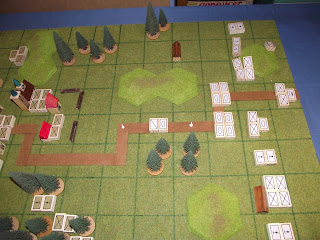 Turn 2 Artillery Fire. The US artillery (based at the rear of the town) straddles the German recce unit but to no effect. Meanwhile the German artillery (top right) is still moving up into position. 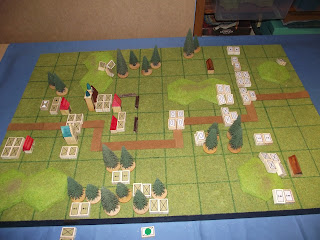 Turn 2. The German recce unit moves aside to allow the first of the tanks to take centre stage. The rest of the attackers shake themselves out into formation for the assault whilst the US move their tank destroyers (on the hill to the north of the town) to engage the enemy whilst their leading infantry pull back deeper into the town. 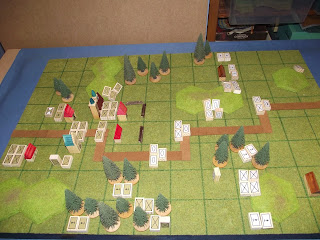 Turn 3. The German armour on the road engages the US antitank battery whilst the US tank destroyer scores a hit against the second enemy tank unit (on the hill). The US machine gun finishes off the armoured recce unit whilst the Germans bring up their Panzergrenadiers in the centre. The German machine gun (at the bottom of the picture) manages to score a hit against the Americans in the wood whilst the Volksgrenadiers move up in support. 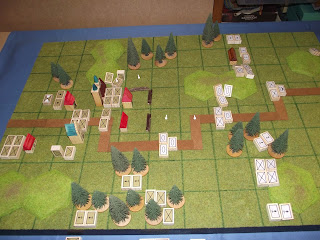 Turn 4 Artillery Fire. The American artillery force the Panzergrenadiers back whilst their tank destroyers suffer from the German artillery. 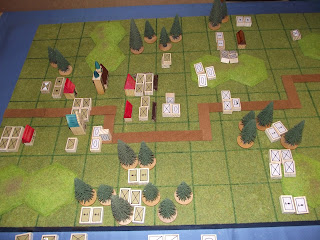 Turn 4. The leading German armour unit roars through the town up to the American antitank battery whilst the Panzergrenadiers engage the infantry on the edge of the town. The second tank unit moves down from the hill in support. The American force in the wood (at the bottom of the picture) pulls back deeper into the wood. 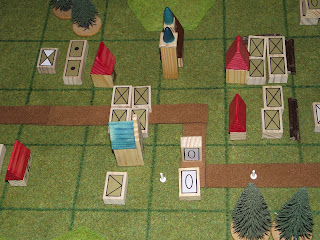 Turn 5 Artillery Fire. The US artillery, bought down almost on the heads of their own troops, inflicts further damage on the leading German tank unit. 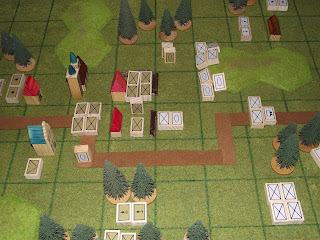 Turn 5. The remains of the German armour in the town is finished off by the antitank battery whilst the US Tank destroyer meets a similar fate at the hands of the second German armour unit. The Panzergrenadiers continue their assault and are gradually gaining the upper hand. 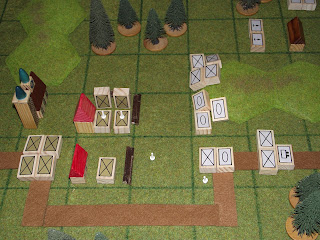 Turn 6 Artillery Fire. Once again the US artillery comes to rescue and drives the Panzergrenadiers back but the German response causes heavy casualties on the northernmost US infantry unit. 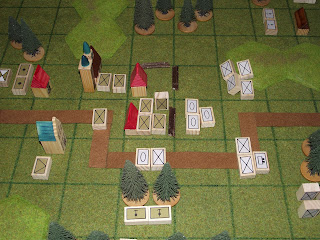 Turn 6. The Panzergrenadiers disengage from the infantry and roar into the town to brush aside the remnants of opposition whilst the tanks take their place, with the motorised infantry follow up. Dramatically though, the German Volksgrenadier unit (at the bottom right of the picture) comes under intense machine gun fire from the wood and suffers crippling casualties. 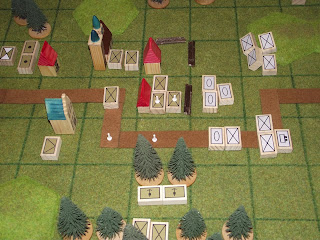 Turn 7 Artillery Fire. The German artillery plasters the town but to little effect whilst the US guns force the Panzergrenadiers back once again. 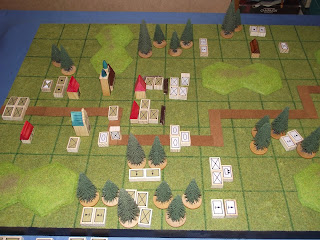 Turn 7. The gallant US antitank battery betters the Panzergrenadiers whilst the desperate Volksgrenadier attack against the north of the town comes to naught. The Germans have failed and the vaunted Panzertruppen, the instrument of victory for so many years, taste the reality of  gradual, final and irredeemable defeat. 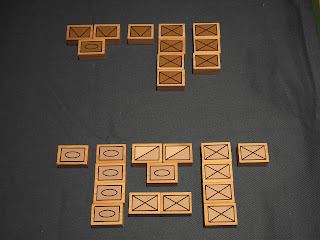 The final score - US 11, Germans 15 so a fairly conclusive victory for the Americans.

It was a tense affair to be sure and served to emphasise the paramount importance of combined arms when tackling a strongly held town or village. The German gamble in trying to 'blitz' the village with tanks could have worked had it been forced early on but operational friction and the disjointed nature of the pace of the advance all combined to derail the plan. The Americans fought when they needed to and pulled back into cover when necessary although still suffered casualties - testimony to the ferocity of the fight.

Thoughts on the rules

All worked well although I am thinking along the lines of increasing the movement distances slightly, perhaps with the move 2 with no combat or move 1 and combat for infantry as an example. I have always liked the idea of having options with movement in that respect as it adds an extra level of decision making to the process of the game turn.

This game is also the 20th held in the man cave since the start of the years so my plan to fight two a month is now back on schedule. I have decided though, to fight another six games between now and the end of the year which will give me 26 in total or one every fortnight.

A very interesting battle, with lots of action and no obvious outcome until quite late in the fighting.

When using a larger grid, the suggestion that infantry can move and fire during the same turn makes sense ... but for the time being I will only add it to the 'house rules' section of the rules..

Many thanks! The larger move distances are probably best when used on the bigger playing area. I actually preferred the 12 x 8 and so will probably stick with it going forward. Using the Hexon hills worked out quite well although a 3" hex may be a tight fit for some of the models have in mind.

A great report Dave, I did think the Germans were going to win!

So did they! The moral of the story is 'speak softly and carry some supporting infantry in half tracks'!

I thought it was going to be a bad day for the US but I was glad to see that I was wrong :)

The Germans attacked piecemeal and were made a meal of in pieces....;-)

Glad you enjoyed it.