The opening weeks of the First Great World War saw very little action across the dark and forbidding waters of the Fezian sea. On the Fezian side of the sea the coastal coal trade came to an abrupt halt as a precaution against raids by Rusland light forces. This strategy was not attempted by Rusland in any event and so Fezia took full advantage of the respite offered and so heavily mined the approaches to most of their major coaling ports. The mining also extended to the traditionally disputed straits and island of Naverona. The fortress had been strengthened and the straits between it and the still uninhabited island of Naverona was now virtually impassable to anything larger than a rowing boat. In fact the Fezians often joked that you could walk barefoot across the straits over the number of mines they had laid. The Ruslanders had noted this and had quietly chosen to ignore the straits all together but were not prepared to give the Fezians the satisfaction of knowing this and so resorted to a series of quickfire bombardments of the island, usually by light forces, with the intention of provoking a response. Fezian national honour could not allow the bombardment of its sovereign territory by a foreign power and so the wheels were set in motion to deal with this latest Rusland provocation.

It did not take long for the Fezians to realise two things. Firstly, the defences of the strait were now so formidable that it would take a major effort by Rusland to take, what was in effect, a worthless island and that secondly, the seaward side of the island was not protected - either by mines (the water was too deep for effective mining) or the guns (the range was too great). Clearly something had to be done and so the Fezian navy commenced patrols that included the far side of the island. It was not long before the two sides managed to be in the same place and at the same time.

The following action was fought using a variant of Bob Cordery's Portable Naval Wargame. My only changes were to extend the original set to include the post 1905 era - various dreadnoughts and modern light cruisers being the main additions - and to 'tweak' the damage/firing system.

The ships involved are of course my newly painted light cruisers and each side by a happy coincidence has two of them. They are broadly similar with the following specifications:

The Fezian vessels are the Midilli and the Drama whilst those of Rusland are the Stolichnaya and the Stolnaya. 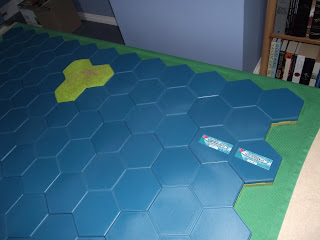 The Fezian cruisers approach the island of Naverona from the West.... 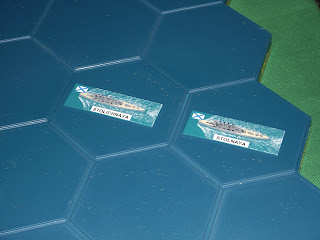 ....whilst the Rusland cruisers approach from the East. 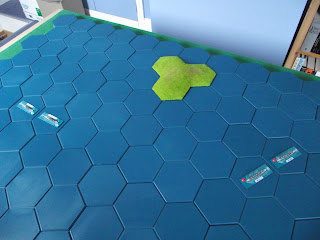 Simultaneously the two formations sight one another and turn to engage. Meanwhile, the stokers urgently throw more coal into the fires to bring the boilers up to maximum power and the gun crews ready their weapons. 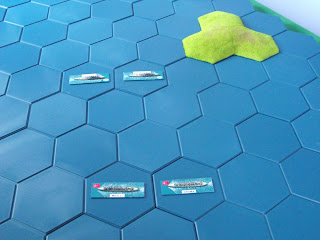 The two battle lines have turned comfortably into range and so the order to open fire is given. 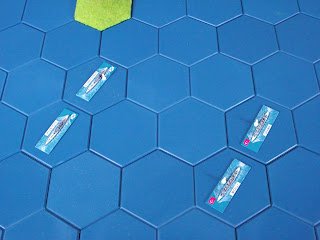 A veritable hail of 4", 4.1" and 6" shells arch back and forth as the ships quickly find the range and begin to score hits. The only exception is the Fezian ship Midilli which manages to miss completely. 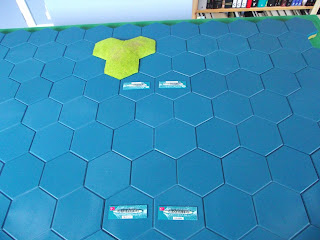 The Rusland ships are now skirting the island of Naverona whilst the Fezian vessels find themselves at extreme range for their guns. 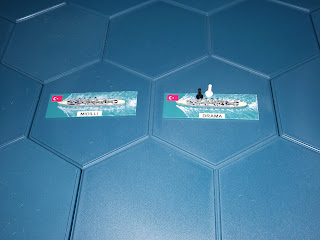 Not so however for the 6" weapons on the two Rusland cruisers. The Fezian cruiser Drama is hard hit (the black marker is for the 6" the white is for the 4") and as a result of this salvo loses a gun dice, one point of speed and one of her flotation points. With the damage she has thus already sustained from earlier in the action she is in pretty poor shape. 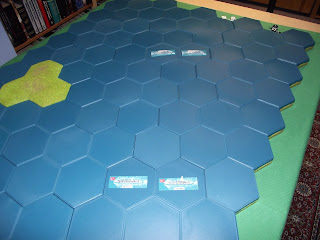 The range is now extreme even for the longer reach of the 6" weapons but still the Drama takes punishment from the Stolichnaya. 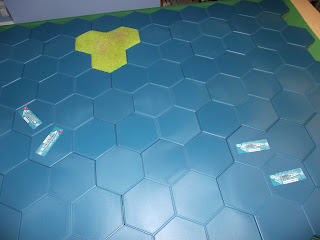 As the Drama has now reached her Critical Point her commander has no choice other than to break off the action and get away as best as she can. In order to cover the retreat of her stricken comrade the Midilli puts her helm hard over to occupy the two Rusland cruisers - hopefully buying some time for the Drama to escape. 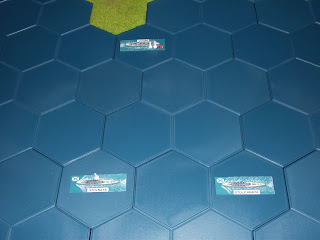 Whilst the Drama limps away from the action the Midilli soon finds herself under fire from the Rusland cruisers and takes some minor damage for her trouble. In the meantime though, she manages to hit the Stolnaya. With nothing to be gained by engaging two enemy cruisers the Midilli then breaks off the action and heads for home. The two Rusland cruisers, with some damage, fire a few half hearted salvoes at the island before departing.

The final damage sustained by each vessel was as follows:

The battle was over and whilst it was a small affair was entertaining all the same. The rules worked very well and I was pleased with the tweaks I had added to Bob's set. I will need to change a couple of things but nothing substantial.

I really liked the ability to apply damage scored from a 2 or 3 point hit to gun dice, speed or flotation points because it gives a little more flavour to the action than just marking off hits. I need to change the wording slightly on this  - I thought I had included the speed lose as a result but could find no trace of it in my draft - but not in a complete rewrite sort of way.

As far as the action went the weight and range advantage enjoyed by the Rusland cruisers 6" proved to be a significant factor - if only for psychological reasons as much as anything else - although they actually only managed to hit the Drama with this calibre gun once. Being under fire and unable to effectively reply must be a frustrating experience - as the crew of the S.M.S. Emden found when engaged by H.M.A.S. Sydney.

In closing I must apologise for the poor quality of the pictures. I am having real problems trying to cope wirth flash photography when using the blue Hexon as it reflects the light quite strongly. I will need to experiment further and so will hopefully get some decent naval shots in due course.

A great battle report! The models are stunning, the scenario makes sense in terms of the existing backstory, and the rules work very well indeed. It reads as if you enjoyed this battle no end.

Interestingly I never use flash when taking photos for my blog. I switch it off to avoid glare from the flash. I also switch on the anti-shake option (it helps with close shots and low-light shots). I also tend to take photos from four to five feet away and then crop them using Windows Picture Manager. (I also use the latter to resize photos down to 1000 to 1500 pixels wide; these are large enough to be used on my blog and can be stored on Picasa ... and they are smaller than the limit set by Picasa to count towards your storage limit.)

I am pleased you enjoyed the battle - the rules worked well (needless to say I have a few ideas for tweaks)and I was delighted with the 'look of the thing'. I am well satisfied with my decision to go down the 1:2400 model route and am looking forward to getting the battleships on the table.

I will experiment with the ideas you have suggested for my photos as I have a funny feeling that the continuing struggles between Fezia and Rusland will need to be recorded for posterity!

Many thanks old chap! I am looking forward to te further adventures of both Fezia and Rusland with some bigger ships in due course so watch this space!

I don't use flash for any of my photos. The majority of my game report ones are done with my iPhone, and resized (to meet Picasa's limits) in Photoshop elements. I rarely provide any other adjustments to them. Sometimes, for arty shots, I use my real camera, but not often; the phone is a much more convenient tool to have on the game table.

I shall have to look up your naval rule variants, though - they sound interesting

Sadly I only have a Blackberry which is not as good for pictures. I have a number of suggestions to play around with and interestingly resizing seems to be a common theme.

I will make the rules available once I have ironed out a few wrinkles but thus far they seem to hit the spot.