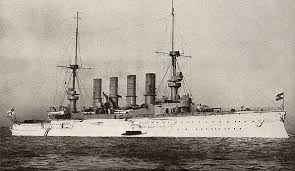 SMS Scharnhorst - luckily Stonewall produce this model and I have four of the same on the way. Purists will no doubt raise their eyebrows at this as there was only two of them. The other two will be appearing under the Fezian flag.

I had some good news today in that Mark from Stonewall confirmed that my order was posted out at the weekend and so should have nearly completed the journey from deepest Cornwall to Essex. As I have previously mentioned (ad nauseum) I am really looking forward to these arriving so I can really tear into the painting. Aside from the dozen light cruisers I have painted so far and preparing the next batch for the brush I have also been giving a lot of thought to the rules. Using Bob Cordery's Portable Naval Wargame (the pre-dreadnought version) as a starting point I then set about factoring in the later ship types - dreadnoughts and a couple of more modern cruiser types (battle and light) and adding some flavour to the proceedings.

To begin with, I added in a couple of gunnery modifiers. I increased the hit score required by one when firing into an adjacent hex and reduced the score required by the same when firing into the last hex of the weapons range. This meant that a 4, 5 or 6 was needed at point blank range and a 6 at maximum range. I also allowed for the reduced possibility of large calibre guns being able to hit a small an fast moving destroyer type so guns rated as Medium or larger suffer a minus 1 when firing at this target type.

The rules essentially follow the Portable Wargame format in that you roll to hit and then roll for effect. A ship will roll a d6 for every pair of barrels of a given type. The wrinkle I have introduced here is that the gun calibre and target armour can vary the damage effect roll. Natural 6s enable an extra damage roll. I also allowed some variety to damage effects in that heavy damage can also be applied to a ship's speed or by the loss of gun dice rather than just by marking down flotation points.

In my opinion using a combination of variable damage effects and by 'modelling' specific ship classes the resultant set will have a smattering of that all important 'feel' factor - but obviously care is needed to avoid 'over egging the pudding' with layers of complexity.

I am planning to run another couple of tests with the rules (and using the new and soon to be arriving models) and then once that is under my belt I will happily share them with anybody that is interested.

All the while though, the ideas and plans for both the Fezian and Rusland navies continue to take shape and the appropriate back story - which is very much an important part of any 'imagi-nation' - is well in hand.

Looking forward to your naval exploits!

I can't begin to tell you how excited I am at this project and am itching to tackle the bulk of the painting. the rules are pretty much done and need a couple of tests just to fine tune them and then let the naval havoc commence!