Now I have a confession to make. The only destroyers I currently own for both Fezia and Rusland are 1911 vintage German and 1914 Royal Navy M classes - although these could be used as the earlier L class. I am looking to add some earlier types in due course but for now these will have to suffice. I reckoned on each side having around 16 and it would have been easy just to go with a single type but I thought - where's the fun in that? With this in mind I opted to give each side a mixture of the two types and to provide a rationale as to how these choices came about. I will need to add to  this story once I have sourced some earlier period vessels so essentially the tale is very much the second part of the whole as it were - think of it as being like the film Star Wars Episode 4 - with the prequel to follow in due course! 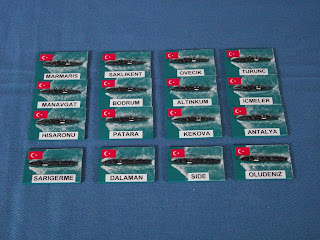 The models were all painted using the 'black undercoat and drybrushed overcoat' technique and also solely using Humbrol enamels - except for the base which was two coats of Cobalt Turquoise acrylic. The flags were made for my by Tony at Brigade Models and the name labels were printed off the PC using Arial 12 in bold. I opted for the Fezians being in overall black (following WW1 German practise - at least up until around 1916/17) whilst the Rusland forces are in grey. I painted the lifeboats in white for no other reason than that I like then to be visible. The black ships were highlighted in the barest touch of white paint. I am rather pleased with the overall look and getting the whole batch completed has made a big hole in the painting schedule for both Fezia and Rusland. 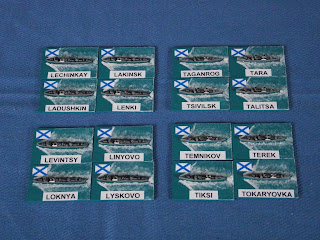 Rusland Destroyers - 'Ls' to the left and 'Ts' to the right

The Development of Fezian and Rusland Destroyer Doctrine

Until the outbreak of the Balkrunian War both Fezia and Rusland used small coastal torpedo boats weighing in at an average of 250 tons and speeds of 25 knots. As neither side had need for anything larger given the limited nature of naval warfare in the Fezian Sea the use of such vessels was primarily defensive. The Teutonian naval mission to Fezia had identified a number of shortcomings with this approach - as well as operationally as Fezian tactical doctrine left much to be desired. Typically small numbers of torpedo craft would attack from ambush and from all directions, leaving them open to destruction by concentrated gunfire. Teutonian doctrine emphasised the use of the torpedo en masse with the gun very much as a supporting weapon and so the Fezian navy was schooled in the art of using the torpedo as not only a defensive weapon but one of offence as well. The only problem was the ships currently available were simply too small and fragile for the envisaged blue water role. The situation was remedied by the simple expedient of seconding half a flotilla (8 vessels) to Fezia for joint exercises - notionally Teutonian commanded ships but with Fezian crews. The ruse fooled  nobody - least of all Rusland - and so the ships were quietly added to the Fezian navy. Fezia took advantage to purchase a further 4 of the same type and so in one fell swoop had a substantial modern destroyer force - which would be more than sufficient to deal with anything Forbodia and Epiria could muster. Against Teutonian advice Fezia also took advantage of a loosening of government policy by Britannia and purchased 4 of the new L class destroyers (previously reported as M class - the model is an M but the L is very similar and is slightly earlier). These are gun heavy ships which Fezia intends to use as flotilla leaders or possibly as a strike force for specific missions - raids and bombardments etc.

Meanwhile, on the other side of the Fezian Sea, Rusland was making plans of her own. Unknown to Fezia she had agreed to provide naval support to Forbodia during the coming war and so, with her navy effectively on a war footing, she had set about readying her forces. Her situation was similar to that of Fezia in respect of the type of torpedo boats she had available (similar 250 ton types although more gun orientated than he Fezian vessels) although she possessed one significant advantage. Her shipyards at Savestopal were already able to produce warships of up to 1,000 tons and so with a suitable design could begin to manufacture them almost immediately. The Naval Design Bureau had not considered anything similar and so once again Britannia came to the rescue and allowed the Rusland government to build the L/M class destroyer under licence. This helped partially but the capacity of the yards to match the Fezian strength was limited. Initial estimates were that a maximum of 8 units could be built - half the Fezian strength - and so the shortfall would need to be made good via external acquisitions. After much horse trading the Rusland navy was able to acquire 8 torpedo boats, similar in design to the German built Fezian types, from the Iberian navy. These had only recently been delivered from Teutonia but were deemed to be surplus to requirements as whilst the ships were cheap to buy and to run, the cost of the torpedoes had not been considered by the Iberian treasury and so the ships did not possess any - they were simply too expensive for the cash strapped Iberian navy. Rusland were able to get around this problem by the simple expedient of replacing the Teutonian torpedo tubes with their own version.

Essentially each side had a similar strength in terms of modern destroyers but whereas Fezia was following the lead of Teutonia and was primarily an offensive torpedo attack force Rusland had a more balanced force with equal numbers of torpedo and gun armed types. Each could be deadly in the right circumstances and with hindsight the Rusland tactical model was probably the more versatile of the two. It is ionic that both navies had come to the same decision in respect of their earlier forces in that both side saw their torpedo craft as defensive weapons - Fezia envisaged using the torpedo on a hit and run basis against any attacking enemy whilst Rusland saw the use of the gun as a more effective deterrent against similar craft.
Posted by David Crook at 16:49

Looking good - this project is moving along quite well!

I have a further 16 assorted cruisers on the painting tray and then it will be the battleships!

I am pleased so far with how these have come out and am really keen to crack on with the rest.

Nice looking bunch of ships there DC. How are your rule changes coming along. I'm looking forward to another play test report :)

Thanks old chap! I am happy with the changes I have applied and once I have the next batch of ships ready i will be testing once again. I have another dozen cruisers on the tray undercoated and ready to go so the test should be sooner rather than later.

Those really are lovely pieces of work David.

Many thanks old chap! The big thing for me with these is that I have actually enjoyed the painting process which is usually something I am less than enthusiastic about!

I have another 16 cruisers on the tray - 5 of which are for the German navy - and hope to have these completed over the next week.

Then, and only then, the battleships will come out to play....;-)

A simple but effective painting method. Your basing also makes them look quite nice. I look forward to seeing them in action.

It was Tim Gow that showed me the way with this technique and I was staggered at how simple and effective it is. More importantly (especially for me) it is the fact that I now enjoy painting as a result of using this method!

I have a further 16 cruisers under the brush at the moment and I hope to have these completed over the weekend - then on to the table for some action!

Many thanks old chap! I cannot take any credit for this technique as I 'borrowed' it from Tim Gow - who is the master whilst I am merely a young Padawan....(well perhaps not that young!