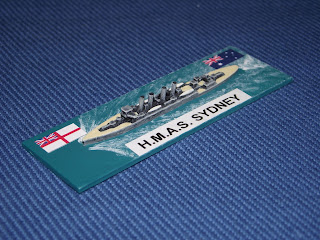 One for the Antipodean readers - H.M.A.S Sydney - no doubt fresh from sinking the German cruiser Emden. I am planning to add some more Australian vessels to the RN in due course.

Although I am still waiting for my Stonewall order (which I am sure you are probably bored with reading about!) I have been busy preparing the ships that I do have available - and at this stage it meant finishing off the four other Town class cruisers. These are now completed and so I took the opportunity between waiting for assorted bits of shading to dry (good grief,  I almost sound like a painter - that could be setting a dangerous precedent!) to clean up the German T class destroyers - the only destroyer model in the Stonewall WW1 German range - prior to painting. As usual, whilst engaged in that zen-like trance one drops into when filing metal models, my mind wandered over the organisation of the fleets of both Fezia and Rusland.

The Stonewall range features but a single destroyer in both the British and German navies - the aforementioned T class for the Germans and the M class for the Royal Navy. Now you could be forgiven for thinking that this paucity of models could be more than slightly problematic when modelling not two but four navies. Ordinarily I would tend to agree but in this case we must work with the materials we have and so T and M class it will be.

The British and German navy planned to use their destroyers in different ways and this was reflected in the weapons fit the ships carried. As a rule the Royal navy ships tended to have more guns than the Germans who in turn were more torpedo orientated. This distinction tended to blur as the war progressed but it makes a useful tactical distinction between the two navies. Such a historical precedent cannot lightly be set aside and so the plan with the navies of Fezia and Rusland is to mirror this via the choice of models. That probably seems an obvious decision but in true wargaming what if? style I want to mix this up a little. The historical navies (British and German) will stay as they are but those of Fezia and Rusland will feature a mix of the two available types but not on an even basis. As Fezia will be following the German lead then she will feature more torpedo boats than destroyers and vice versa for Rusland. The only reason I am doing this is to inject a little variety into the respective set ups.

I am also planning on Fezia having her destroyers in black whilst those of Rusland will be in the standard grey. I have a batch of flags on their way from Brigade for the bases and am looking forwrd to getting some more of the models completed - after the batch of 24 destroyers are reday the remaining cruisers will be tackled; followed by the pre-dreadnoughts.

All in all then it is creeping along very nicely so far and will get a whole lot better once my Stonewall order arrives.

The basing is beautiful David.

Many thanks old chap! It is flat painted Winsor and Newton Cobalt Turquoise with white dry brushed waves and wakes. I am not keen on sculpted bases for ships - at least not at this scale. The flags were courtesy of Brigade Models and the name lablel was off the PC.

I have actually seen sea that colour as well....;-)

Looks very sharp I must say.

Cheers old chap! I must confess that I was very apprehensive about trying out a new technique and was pleasantly surprised when it worked out so well.

I am really looking forward to tackling the rest of the ships in due course - and once they have arrived.

That came out very well indeed, David. Really like how you based it.

Great looking ships, Dave. Could I ask what colour you are using for the decks, as I haven't found a good one yet.

The colour I have used for the decks is a very old 'Humbrol Authenticolour' (probably 1982 vintage!) called 'Mast Oak'. They also did a colour called 'Deck Plank' but this always seemed a little on the green side to me. I will look up the paint code and post that - you could probably match it via a colour chart of some kind. All the painting except for the base is in enamels - simply because I have so many of them!

Many thanks old chap! It is funny, using the new technique for the models has really reignited my creative spirit and I am looking forward to tackling the remainder. the base was very simple and I went with the 'less is more' approach for the waves and wakes as previously I used to overdo these.

I am really pleased with the way these have come out - I also think the ensign and name label adds to the look.

Thanks for the information Dave.

Looks like it is in the Humbrol enamel paint satin colours range now as 71 Oak. A quick check of the Vallejo > Humbrol equivalence chart and it looks like 70.847 Dark Sand is a good match for it. Now to see if I have it in my collection...

A pleasure! Your information is equally as available because I only have half a tin left and a lot of ships to paint so will need to replenish it at some point.