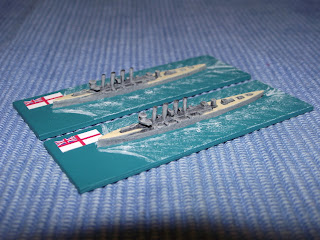 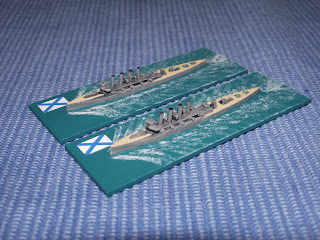 (With apologies the the estate of Frank Sinatra....)

Aside from a day spent indulging in my usual job search related fun and frivolity; I have managed to finish the first batch of Town class cruisers for my 1:2400th WW1-ish project. In common with the Magdburg class cruisers completed earlier these models will see service in both the Royal BritannicNavy and that of Rusland - under the terms of the alliance between those two great nations; Britannia and Rusland, to offset the similar alliance between Fezia and Teutonia. Details of these nations can be found here - The World of 1891.

The models are the Bristol group of the Town Class Cruisers of WW1 (Town Class Cruiser 1910) from Stonewall Miniatures. They have been painted using my 'new' technique of a black undercoat and a dry brushed top coat. I will need to add the name labels in due course (that is a job for over the weekend) and they are then ready for action. I heard from Mark at Stonewall today and he has managed to get the casting machine fixed and the new mould 'cut' for some of the models and so my order should be with me during the early part of next week.

In the meantime though , the recent outbreak of the First Great World War has seen an increase in offensive posturing by the naval forces of both Fezia and Rusland, supported by their allies, and it expected daily that the shooting will begin in earnest.

Although it has been some 25 years since the last 'incident' involving the hotly contested island and straits of Naverona (The Second Bombardment of Naverona) it is expected that once again this will be a key feature in the plans of both naval HQs. Fezia has already taken the precaution of heavily mining the straits but all this has served to do is to antagonise Rusland as well ensuring that the uninhabited island can be engaged freely from the open sea - beyond the range of the dreaded 'guns of Naverona'.

Only time will tell what plans Rusland has in store for this continuing insult at the hands of the Fezians.

David they look good and the simple but effective seas compliment the models. Way to go!
Jeff

Many thanks sir! I think I have just about gotten used to the base colour....;-)

The rest of he models should be arriving next week so watch this space.