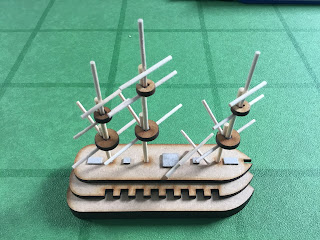 The component parts of what will become a frigate displayed so that you can see the ‘layered’ approach to the hull. Note the cutouts on the gun deck layer - only eight per side I know but it is intended to be purely representational. The masts are not fixed but it is handy to store them like this whilst waiting for sealer or paint to dry.

As mentioned previously I currently have five models under construction - all of which are fully masted. The masts took me around a day to build and the hulls would be a lot less - or so I thought.

I kind of hit an unexpected road block with the hulls when it came to deck guns. I was completely unprepared for this and it has delayed progress by a day or so but I think I have successfully managed to clear the blockage in the creative process! My deck guns are lovely little models and they look very effective on the only models that are so far carrying them - the pair of 90 Day gunboats I built a short while ago. I fully intend adding these to a couple of other ships I am building but not to the current batch.

Now here is the thing. Whilst I never intended mounting the full suite of deck artillery on the frigate and four sloops I am building I wanted to at least show the heavy pivot guns. I duly assembled one to see how it would look at it was just plain wrong. It was too large. For some reason, and this is why progress came to a complete halt, the guns looked fine on smaller models but not on the ones I am building.

I was by turns stumped, at a loss, annoyed and frustrated by this but after a day of head scratching think I have a workable solution. All will revealed once the ships are finished but the picture above will offer a small clue as to how I solved it.

My stride may have been interrupted slightly but I am now back in the race and pushing on with the five models in question.

Late Edit. Everything is now sealed and jigged up for painting so tomorrow will see the brushes out and the undercoating commencing. Normal service has been resumed - or something like that...

Hi David -
A veritable forest of sail it will be - Man's they look nice already. I really must take some pictures of my Corsair fleet. Two of them are gunboats, one (a xebec rigged vessel) mounting 10 cannon, the other 6. The other four are transports. Just the thing for coastal raiding.
Ion

It was a frustrating experience mainly as I had such high hopes for the artillery pieces but they just seemed to be way too large on the bigger models and just did not look right. Harmony has been restored though! It will be more a forest of masts rather than sails though.

I would love to see your Corsair fleet so perhaps a blog post may be in order? :-)

I'm glad you solved your modeler's block and look forward to seeing the solution and finished ship, as the teaser looks great already:).

The solution is a simple one and in fact I wish I had opted for it in the first place but we live and learn. I feel a lot happier with the outlook for them than I did two days ago that’s for sure!

Having seen you assembled deck guns, I hope the alternative you’ve had to come up with are as good ... although, knowing you, they will be!

It is a very simple idea but it seems to look OK. Think of result as being ‘impressionistic’ rather than ‘realistic’!