The Famous Five (Minus Three!) 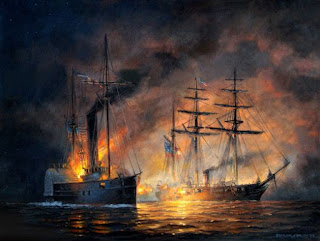 For reasons that will become apparent in due course I have taken the decision to split the painting of the five models currently under construction into two batches - with the first being of two ships.

I am currently building five fully masted ships but there are some key visual differences between the two groups hence the decision. The second batch of three models are all for the Union and have what can best be described as an ‘old navy’ style paint scheme meaning black hulls and a white stripe including the gun ports along the hull. The wisdom of the laser cut hull section now become obvious! As the brushwork will be a little more involved with these three ships I am going to tackle the other two first of all.

The two that I am working on - one for each side - are far less distinctive looking. I have had to make a few changes to their rig though. Although I am building four sloops in total the two I am working on have a much lighter rig than the pair of ‘old navy’ types. As a result of my research (aka extensive trawling of the net!) I have had to build a pair of new mizzen masts for them and also reduce the overall size of the rig to better balance the look. As these two sloops are effectively newer ships thank the other pair the tendency to lighten the rig seems noticeable. It is not a subject I have any great knowledge of but to the untrained eye it seems quite logical and a natural progression.

One thing is for sure though, I have the utmost respect and admiration for anyone that can make sense of the complex subject of the evolution of 19th century sailing ship rigs!

Will they be called the 'Enid and the 'Blyton' by any chance? ;)

Nope - nor will there be ‘lashings of ginger beer’ when they are finished!

Although not part of the current batch I do have an idea for the name for the Confederate blockade runner I shall be building...:-)