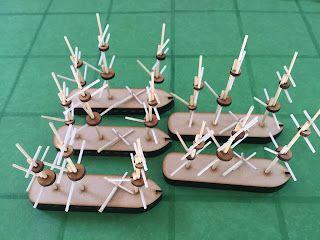 Masts, bowsprits and spars placed on their respective hulls to dry. None of these are fixed in place and indeed, three of the hulls are only partially assembled. For the record there is 55” of bamboo skewer (nearly seven skewers at 8” long) and 87.5” of wooden cocktail stick (nearly thirty cocktail sticks at 3” long) involved in building the five ships above!

Yesterday was a good day on a number of counts. First of all some good things happened in respect of work which is shorthand for actually managing to get hold of people at the first attempt by phone! Secondly, and of more immediate interest, I was able to not only cut out the spars for the five ships I am building but also to assemble all fifteen masts and five bowsprits. They went together without a hitch and are now ready to seal and paint. 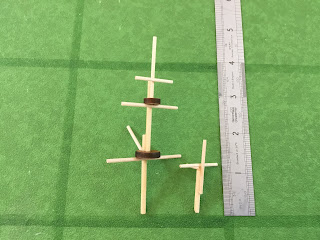 Being as methodical as I was in the cutting stage certainly helped the building process along no end so today will be spent working on the hulls and then a grand sealing session will take place later today prior to undercoating and painting. Once these five models are completed the collection will stand at fifty strong leaving ten to go. From the material I have to hand I should be able to build a further four models with the final six waiting on Warbases. My deadline of the end of June for the completion of this build is looking very achievable- especially as the remaining ten models are pretty straightforward - no octagonal casemates or great forests of masts!

You’ve churned out more ships in the last few weeks than Harland and Wolfe have managed in my lifetime! The mast construction is inspired and well worth the effort by the way. Although not shown in this post I particularly like the “crispness” of the painting on your models. Do you mask them up or just have a rock steady painting hand?

Dave - apologies for this - a lamentably practical question, but I'm having gluing hassles at present. What did you stick your masts and spars together with?

Loctite Superglue Precision (presumably because it has a long nozzle) is my glue of choice. My local DIY store had a batch of these with 50% extra in and I ma now on the last of it (note to self: get some more whilst you think of it!). It is not a gel but works quickly and also can be used to good effect as a glue ‘filler’.

You have probably gathered I tend to be quite lavish with the stuff!

Thank you old chap! The current batch have certainly benefitted from proper prior planning and adopting an assembly line approach.

The hull lining has been undertaken with Tamiya masking tape which is really good stuff to use. Another trick is to paint the edges of a whole layer the colour you want before assembly. HMS Supern had her top and bottom hull layers painted this way (the white and brick red) whilst the lining was using tape. Three of the five models I am building will be using a combination of tape and whole section being painted prior to assembly.

Crikey you’re cracking on with these. 50 ships made. An impressive run. Scratch building like this must give you double the satisfaction.

The five above will get me to the 50 mark and you are absolutely right about the satisfaction aspect! It sounds corny but I feel really pleased with myself for having stayed the course with this project as my gaming career of many years is littered with ‘also rans’ and abandoned ideas.

I have exorcised a few personal ghosts with this project and as mentioned, have enjoyed the whole thing immensely!

Now back to the building!

I am very, very impressed, both by your prodigious output and they excellent results you have achieved.

Not long now before the project will be completed ... and then the ships can begin to engage in combat!

Many thanks old chap - much appreciated! The support I have received from all over the blogosphere during the course of my efforts has been prodigious and has really helped me to ‘stay the course’. The more I have built the more I wanted to build! Getting the rules written was also a huge plus and for sure I am looking forward to getting the models in action - and for some time to come.

I have learned a lot during about many things during this endeavour, not least of which is about myself - corny but true.

I'm quite in awe of your ingenuity and industry with this homebuilt ship models.

Thank you old chap! I have always enjoyed making models from odd bits and pieces and whilst they are invariably simple looking they fight just as well as anything else! I am always on the lookout for odds and ends that can be used for something usually quite unlike for which they were intended!

It is half the fun in my opinion!

Well I think you're doing a damn fine job on these Dave.

Thank you old boy - much appreciated! Fifteen to go with five of them half way there!

Those look very impressive David and you have certainly maintained good focus and have achieved an awful lot, which is great to see. Keep up the good work!

Thank you old chap! I need to stay focussed for this final push - especially as I shall be back in the office full time from 1st July. It is all on course and there will be 60 models to show for it - I can’t help but be pretty chuffed!