The Case of the 'Early Turret Battleship' 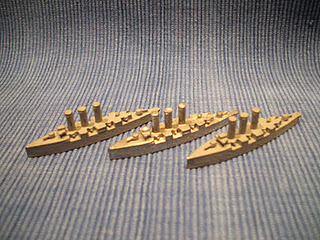 Number 13 Early Turret Battleship - I don't think so....
You may recall my recent post about the ships I shall be using for the navies of both Fezia and Rusland. These are the famed Minifigs ships with a couple of BMC originals thrown into the mix for good measure. The two mysterious pre dreadnought battleships have been tentatively identified as a pair of Swiftsure class (I say tentatively as they missing the very prominent midships cranes the class had - which does throw their parentage somewhat into doubt. My thanks once again to Steve Cady of Castles of Tin for the clarification) but I was at a loss to identify the three models listed as 'No.13 Early Turret Battleship'.

Arrogant Class - Suspect number 2
I had a good rummage through Conways last night (1860 to 1905) and as far as I am able to tell the models are closest to either an Arrogant or Highflyer class of protected cruiser. the biggest problem they have is that they have a turret fore and aft which neither class has. This may have been a Minifigs design feature (?) as from a side profile they look as though the guns and shields are in fact in the form of a turret. Minifigs had 'form' in getting aspects wrong on their naval models - for example, model number 11 - the Invincible class battle cruiser - has all the turrets along the centre line rather than 'winged'. Again if working exclusively from a side profile then this would be an obvious mistake to make.

For Fezia and Rusland then (actually Fezia) these models will be classed as protected cruisers and are of suitably indeterminate origin to not be an issue.

The past couple of days have seen me feeling less than energetic in respect of anything remotely gaming related due to a rotten cold/throat/chest infection and so pottering about with a copy of Conways has been about as good as it gets.
Posted by David Crook at 06:13

If you building fictitious fleets, you can call them what ever you want. Personally, I'd use them as Elswick cruisers with an 8-10" gun at each end and 6" in casemates. At the turn of the 20th century these could pretty much be bought off the rack and similar shps appeared in many small fleets.

Good luck with the cold, and enjoy the Conway's

The cold is improved in that at least my head is now clear!

Nothing wrong with an Elswick although I would trim the guns a little - I need some lighter armed cruisers so 6" and 4.7" will be the order of the day methinks.

A good rummage through Conway's, music to my ears

I trust you had a brew or tipple to hand ;)

Those armoured cruiser "thingies" you've got to love 'em

I certainly agree with the first and third point and IIRC a couple of brews featured with the second!

All very inspiring and I am looking forward to cracking on with the models!