The Russo Turkish War of 1877 and an Act of Incredible Generosity....Part 2 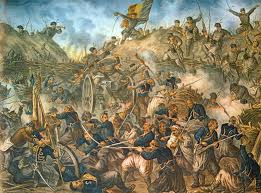 Storming the Grivitsa Redoubt
Yesterday evening was very much one of sorting out 'stuff'. Aside from the Minifigs ships (which probably took me longer to photograph and write about than actually getting them down from the loft!) I also made a start on sorting out the Russo Turkish War of 1877 figure collection I recently acquired courtesy of Chris Hardman.

Without going into finite detail there is near on 800 foot figures and around 200 mounted with 10 guns and crews! Now that is a collection and a half and no mistake. The only area I need to buy anything for is Russian artillery as mysteriously there are only two guns and crews for them whilst there are eight for the Turks.  Everything else is there though and in droves! Luckily Lancashire Games (lancashiregames) carry a small range of models for this period and I have already approached them with a number of questions around the models they produce so this shortfall will be speedily addressed. I had a back up plan for this in any event because the uniforms of Russian gun crews of the period are very similar in cut to that of a well dressed ACW Union artilleryman (except they wore boots) so these could have been press ganged in if needed.

Realistically there is no way on God's green earth I will paint the entire collection but there is more than enough models for me to organise it for my own use in any way I choose. At the moment I am leaning towards a Charge! style organisation of 48 figure infantry regiments (perhaps two or three a side) plus command as this would fit in nicely with my gaming aspirations for the period. I will have plenty of time to decide though as the 'fictional' 1890 collection will come first. In the interim I will acquire the additional models I need though so that I know I will have everything to hand I need for when I do start.

Something to think about before you settle the organization. If you are thinking of hexes, it might be good if each company fit in a hex.

Single 15mm figures can be quite fiddly. If glued to a multi figure base they can be crammed into a 12mm frontage, sometimes closer but if you are determined on singles, I'm not sure a base width of less than 15mm is feasible, I could be wrong. If 16 men + officers per company, deployed 2 deep, you are looking at perhaps 120 to 140 mm per company. If your hexes happened to be 10cm wide.....

Might be worthwhile back tracking from an optimum frontage. After all, even if you adopt a form of Charge! it says right there that the organization is only suggested. Past experience has shown that companies as small as 12 work fine.

Lots of happy hours of planning and preparing ahead!

It is an awesome collection and I fully intend making the most of what I shall keep!

The individual bases I intend using are 1p pieces with movement trays. These are roughly 20mm across which is a little on the large size but but when placed side by side look pretty good.

Using Hexon tiles (100mm across) means that 8 figures in two ranks would be about right - in effect a half company.

I intend using the figures for both hexed and conventional games so the Charge idea will be better suited so the traditional table top.

Lots of planning, preparing and painting to come!