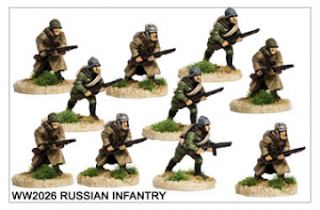 Foundry 20mm WW2 Russian Infantry - there are rather a lot of them!

Yesterday evening saw the arrival at Chez Crook of Bill Knowles, driving a BMW X5 filled to the roof with part of Eric's 20mm WW2 collection. I say part as Bill reckons he has another car full of the stuff!

Very early in the unpacking process it became quite obvious that Eric had adopted a slightly different approach with this collection compared to his 18th century armies - and it was easy to see why.

For sure there were boxes solely of unpainted figures - plenty of Foundry in evidence - but in many cases there were units that were being expanded so there was often a usable painted portion with the unpainted figures needed to complete the unit in the same box. When we realised this a rethink was needed. For his 18th century kit Eric kept the unpainted models separate whilst the WW2 seemed to be very much a work in progress. Needless to say though, everything about the WW2 collection is on the usual 'Eric' scale of 'overwhelmingness!'

With vehicles and artillery of suitable 'Eric' proportions the whole lot takes up a great deal of space and as I am limited in that respect it meant that I was only able to take three crates of unpainted figures at this stage. A cursory glance shows an awful lot of 1941 Russians (including partisans) as well plentiful Japanese opposition for the as yet unlocated 14th army (in which Eric served).

A look at the painted part (which was in effect some three quarters of the car load) confirmed a number of things. The figures are painted in a 'block colour, no shading/highlighting or flocked base' fashion Similarly the vehicles and artillery (of which there is a prodigious quantity) are all flat colours. The vehicles are a mixture of plastic, metal, resin and die cast offerings. One thing I noticed was that Eric had used a number of Ledo 'Days Gone By' 1920/30 vehicles that had been drafted into the German Army by the simple expedient of a coat of overall panzer grey and the addition of a cross here (or should I say Heer....) and there.

In terms of the periods covered it seems that Eric went for early and late war forces. For the former there are Belgians, Germans including quite a few Fallschirmjager. At this stage I do not know what else for the Western front there is although I suspect that there are other Germans at the very least. There were quite a few unpainted Russians for 1941 so I can only assume that he planned to tackle this at some point. The late war kit included British, American and Polish paratroopers and rather a lot of Germans including a Luftwaffe field division. There are American and British tanks aplenty - loads of vehicles seems to be the order of the day across the whole collection - and the selection for the German army ranges from a Jagdtiger down to Panzer 1s and all points of the compass in between.

There is massive amount of potential with this collection. The component parts could be used in their own right or as the basis for a specific campaign or campaigns.

In the meantime I will sort through the unpainted figures I have and will post the details of what I find in due course.
Posted by David Crook at 09:40

My WWII juices are watering!