Preparing the Ground (and the Water) 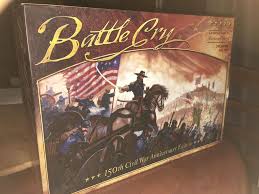 At long last I have a copy (again)! Having said that, Worthington Games are soon to be releasing their Hold the Line ACW game using blocks rather than figures - no command cards though in common with the AWI and F and I versions

I have often mentioned about my unfortunate habit of being overly ruthless when consigning a project to history. I tend to be all teeth and claws when embarking on 'the next best thing' but sadly my attention span can be far too easily swayed in other directions. I frequently end up disposing of the acquired material - usually at a loss - and then reinvesting the proceeds into something else that is new and shiny. This goes on ad infinitum and has been a major feature of my gaming career since as far back as I can remember.

The American Civil War is a case in point. My earliest introduction to the period came via Airfix but it was not until I moved to London in the late 1970s that actually gamed the period using painted armies. the figures were 15mm and the rules of choice were Johnny Reb or a set called, if memory serves me correctly, Circa 1863. I disliked both sets, Johnny Reb more so and remember some truly epic 'frank exchanges of opinion' whilst using them. It quite put me off.

I would have to say that my interest in the period was maintained throughout by virtue of the naval side until the appearance of Battle Cry. Now I have owned a set of the original version of this game and also the 150th anniversary edition but both have long since gone. I have come to regret this, mainly because not only did they give a cracking game but they also assumed a significant role in my Command and Colours enjoyment. I am therefore, delighted to have been able to track down a sealed copy for a reasonable price. My motivation for the period is far deeper now and with the imminent arrival of the 30mm Spencer Smith ACW collection I shall be set fair for some entertaining games in the coming months. 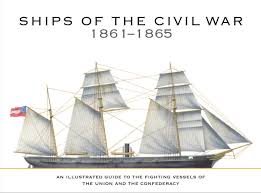 Lots of full colour side views and some technical detail - a welcome addition to the collection.

I have also mentioned previously that my particular interest in the Civil War tends to be tied to the operations around the rivers and swampy bayous of the South and West. If you look back far enough you can see details of the great scratch building project I undertook (some 50 plus models all told) where all the models had to fit on a 4" hex. Some of them even featured in a couple of games using the block armies. The models have long since gone and sadly so did the library that went with it. I have replaced a couple of titles: Thunder along the Mississippi and Gunfire around the Gulf - both by Jack D. Coombe - and have added the book you see above published by those very nice people at Amber Books. By no means is this a super detailed title but for my planned models this time around it will be more than sufficient. If I can get a copy of Gibbons work on the subject or that of Paul Silverstone it would be a bonus but it is not really essential. I have a very nice book on river gunboats and a number of Ospreys that will help. remember, the models I am looking at now will be larger and taller cartoon style ships as I was to use them alongside the 30mm figures. They will be scaled to fit a 5.5" hex grid (my Peter Pig Hammerin' Iron mat) and will be generic types.

Finally, I always intended to fight Civil War battles on a campaign basis - either as a series of linked scenarios or something more elaborate. In my mind's eye I have a kind of 'almost but not quite' Vicksburg kind of affair or possibly something set a little earlier. I have even looked at the waterways in the area I live and there is much potential for a 'not quite an actual US state' set up or, as is my preferred modus operandi the old Hollywood stand by of 'based upon'. 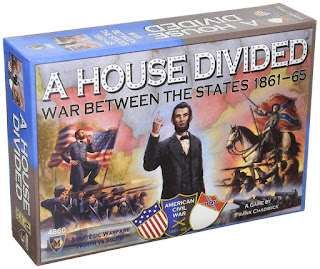 A House Divided by Frank Chadwick is an award winning strategic level game of the Civil War using a point to point movement system. A version of the map appeared, I believe, in the ACW expansion for his original Volley and Bayonet rules. There is no doubt in my mind that the system could be readily adapted to suit my needs even if I decide to create my own US state to fight over.

To finish this post then all I can say is that a number of crucial elements have come together at the right time and so for the first time in a long while I feel confident about what I will be doing for the period. For sure there is still work to be done - I need to think about some terrain as well as the ships, there is even a few other figures to be added although initially these are not essential.

It has been a while getting it all together but at last I can look forward to gaming the Civil War in the way I want to and more importantly, in a way that I will enjoy.

Just how many things have you got on the go at one time Mr Cook!

I tend to have several things on the go at any one time and they tend to circulate in and out of the limelight. I use this as evidence of my ability to multi task although my good lady sees it more along the lines of needing to spend more money....

David: you and I have quite opposite methods when a project ceases to hold the attention! Mine just sit in boxes and drawers and shelves until my attention once more swings in their direction. Nothing ever gets truly abandoned. The rare occasions I've got rid of a thing I have tended later to regret. The hazards of hoarding!

On balance I would say that I have probably abandoned more projects fully and not returned to them at a later date than those that I have - the only problem is that those in the latter category tend to be larger and more resource heavy! My wife thinks I am a hoarder but for the most part I am not.

I like to think of myself as being a wargaming recycler!