Counting on Belisarius to begin with.... 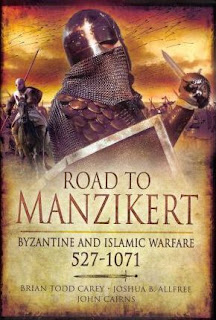 Hard to believe that this book was added to my library some seven years ago!

Way back in the dim and distance days of 2012 I devised a plan to expand the coverage of my block armies to include the pre gunpowder or 'ancient' period. The plan was that by devising some fairly generic looking blocks I could happily fight wargames from the time of the Pharaohs up until the Italian Wars. Essentially the new blocks would be covering the time span of DBA. The book you see above contains some rather nice battle maps and makes use of some very useful looking map symbols for the usual variety of pre gunpowder troop types. I got as far as drafting some basic troop type labels but abandoned the attempt - mainly because I came into a large selection of Command and Colours Ancients blocks which were rather more useful than my own efforts. 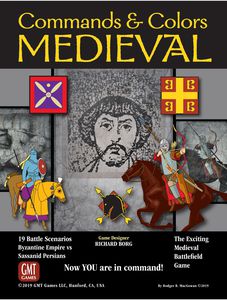 The Command and Colours: Ancients system needs little introduction from me and it is what I would call a 'proper' ancients wargame, covering as it does the period from the Greek and Persian Wars up to the fall of the Roman Empire in the West. Richard Borg has now taken the game system a stage further come up with the first release in the next sequence if you like - Command and Colours: Medieval.

I will be completely honest with you. When I first heard that this was going to released my initial reaction was frankly one of 'meh!' I had visions of endlessly replaying the Battle of Agincourt and dealing with hordes of Knights and longbow men - a subject that is only of passing interest in my world unless you get down to skirmish or Lion Rampant level. I should have had more faith in that the game above is obviously the first in what I suspect will be a long sequence.

In fact this has been confirmed by GMT themselves in that this initial release concentrates solely of the Byzantine Wars against the Sassanid Persians and occasionally the Moors. All of the various Goths and Franks the Byzantines campaigned against do not feature at all although they may appear in a future supplement.

As an aside one of my pet peeves with the Command and Colours Ancients and Napoleonics is the fact that later expansions also tend to include additional troop types from earlier editions meaning hat if one wants to have a complete army one has to buy each and every expansion. I realise that companies are not charities and by selling more they can produce more but it is irritating all the same. Perhaps in time GMT will sell complete army packs to avoid this but I suspect that is a naive hope!

The period from 500 AD to 1500AD saw the rise and dominance of the mounted arm and the subsequent shift in emphasis as the lowly foot soldier slowly came to prominence. For me there are certain periods within the span of the thousand years mentioned that are of particular interest. First and foremost I would say the Crusades which I am sure will feature in due course as will the period of the great Arab conquests. I like the idea of the Viking era but again, mainly at a Lion Rampant level.

For a detailed overview of the game take a look at the following: Command and Colours: Medieval - A Review

For my own part I am very excited about the potential of this latest version in the Command and Colours stable and the nuanced way that Richard Borg has taken the core system and 'medievalised' it for that all important period flavour. At this stage I cannot see myself producing armies for the game - at least not for this edition - although I do have a couple of sets of plastic figures from the Risk: Europe Medieval version that would be a cheap solution. I will say that I am probably more excited to see what comes next because should the Arab Conquest feature then sign me up!

Note: Belisarius was a famous Byzantine general of the period covered by the earlier years of this edition of the game and subject of a cracking fictionalised account of his life written by Robert Graves - Count Belisarius.

I've read Graves's book - based, I believe, mostly upon the History of the Wars by Procopius of Caesarea. Although I have read Theophylact Simocatta (in translation) about the Emperor Maurice, I don't recall running across Procopius's history.

I have used my Memoir '44 board for Byzantines vs Bulgar games (published on my blog a couple of years ago). I might have to revisit that some time.
Cheers,
Ion

Procopius and his Secret History can be picked up easily enough - there is a Penguin Classic paperback edition kicking around - and I have seen his 'official' history as well. I have not heard of the Theophylact but would give the translation a look. I will also drill down into your blog for a look and your Byzantine/Bulgar action.

Here's a link to start with...
http://archdukepiccolo.blogspot.com/2017/09/soldiers-of-byzantium-proposed-portable.html

We have played MEDIEVAL a few times now and the game plays much differently than ANCIENTS. Cavalry are really powerful and infantry less so. Very dynamic action and great fun!

Many thanks for the link and the most informative blog entry! The army is later than the Byzantine version in the base game but I am willing to stake my house on the fact it will feature in the game at some point!

It certainly looks like a lot of fun and I was pleased with the extra depth of the playing area. This will help cavalry heavy armies no end!