Eric and his Imagi-nation Armies....Part 1 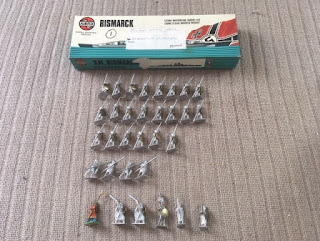 Indian native spearmen of which there are two such units. Note the mix of figures for the command group - Eric often used figures from other ranges or manufacturers. The shields are drawing pins and are fixed into the figures. Eric would use any suitable box for storing his unpainted units!

Now that the disposal of  the 18th century unpainted figure component of Eric's collection is approaching its final stages (thank the maker!) I thought it might be of interest to shed a little light on what Eric did and why. The former is quite easy but the later we will never know and so a degree of speculation or downright guesswork is involved.

Within the collection there were two definite imagi-nations in the shape of the Kingdom of Umbriago and the Electorate of Bustenberg. I will describe these in more detail in separate blog posts As there is another force I want to highlight. This particular army is of interest in that it really showcases Eric's powers of improvisation at their best!

Eric had organised a number of units for what was described as an Eastern army of the 18th century. My feeling is that it was intended to be some kind of quasi-Mughal Indian or Princes army - to be used for the latter part of the 18th century. Naturally I have no way of confirming this and whilst the army contains plenty of infantry and a smattering of cavalry there are no elephants or other exotica. I would stake my house on the fact that if Eric had ever picked this army again in earnest then Elephants, rocket troops and camel mounted artillery would have been added, not to mention some enormous siege type guns. I have taken pictures of the units he had assembled - mostly old Minifigs - and straight away you can see that he would happily press into service figures that would have the historical purist reaching for their smelling salts or fortifying glass of a strong spirit! 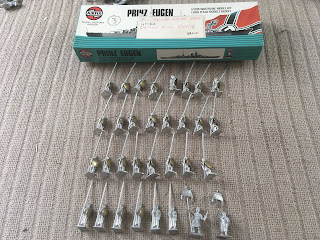 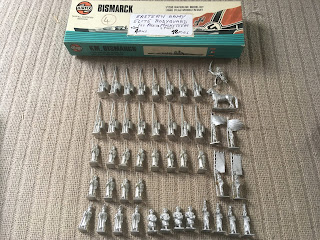 An elite pike and shot bodyguard unit. The drummers are from the Minifigs Turkish range 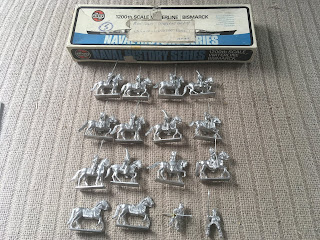 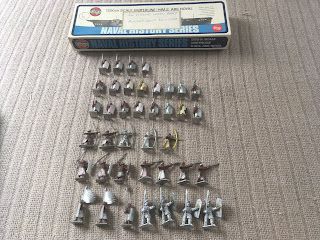 Peasant spear and bow armed levy including some converted rocket firing troops. Most of these are from the ancient Indian range 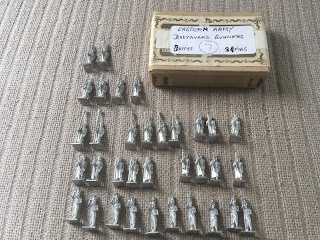 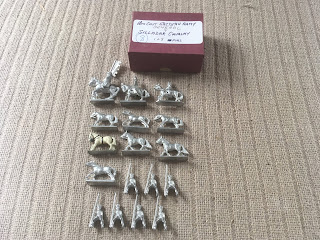 Silladar cavalry representing the commander and his immediate retinue 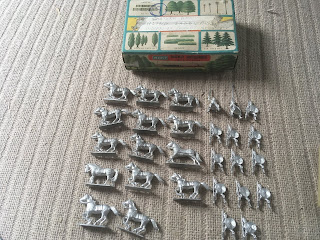 The diversity of figures used - many of the above are from the various ancient ranges that Minifigs produced - may seem a little quaint nowadays but once everything had been painted and based and the inevitable back story added (Eric was a great one for this) the whole then became a coherent entity. Originally the above collection also featured a unit each of Afghan and Ansar riflemen and there is also another cavalry unit as well as some extra gunners.

It is fascinating to speculate what plans Eric had for this particular collection although we will never know for sure. My feeling is that having this force would enable Eric to use it both as an ally or enemy for both his British and French collections.

One thing is for sure though. The army would develop its own personality reinforced with the inventiveness, tongue in cheek humour and story telling ability of its creator.

I am fully in agreement that units should be sorted and boxed (or bagged in my case) and labelled properly before painting starts. Anything else leads to chaos and uncompleted projects. Terrific range of boxes in use there.

I am properly tired of the umpteen Hinchliffe blue boxes that have disintegrated due to age leaving yours truly to carry out endless running repairs. The little brown tabs fall off with the slightest nudge and at one point the man cave looked like it was covered in brown confetti!

There are also Greenwood and Ball, Eaglewall and Albeken boxes!

All very organised though and usually with uniform notes and organisational details included - often written on the back of business cards.

There are some very good boxes from the Works, about the same size as a Hinchliffe box, maybe slightly taller, with a close fitting lid, plain brown cardboard, £1 for two. They are strong as well. Buy them in bulk online and wait for there to be a discount before you do so you can get them delivered for pick up at a Works store of your choice. I must have bought at least a hundred. I tend to use square post its to say what is in them so they are endlessly recyclable for other figures later.

That sounds like one helluva good idea! A uniform box size will take a lot of pain out of the storage of the remainder of Eric's collection - it may even mean that I will be able to clear a complete crate of figures simply by condensing the unit boxes down.

Many thanks for the heads up - much appreciated and there is a newly opened branch of the Works in my local village!