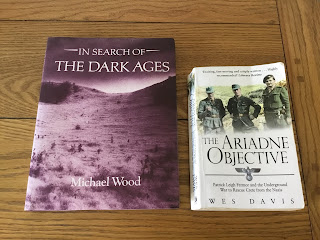 I remember the TV series of Michael Wood's book and I have been in search of a hardback version for ages. The paperback is of a subject I am hugely fond of - both the island itself and of the WW2 story. I had not seen this book and so have immediately started a trawl for a hardback version!

What a weekend! Aside from the blistering heat there was an epic test match with a stunning victory over the Aussies, Chelsea secured their first win in the Premier League under Frank Lampard, we had a family day out with my grandson by the sea catching crabs (11 in total) with a hand line, my son knocked up a barbecue extravaganza and SWMBO and I even managed to sneak in a boot sale visit!

On the gaming front I managed to get a lot of sorting out attended to and the disposal of Eric's 20mm WW2 collection has begun. I also managed to get rather a lot of packing finally taken care of although there was some issues with the courier which continue to delay matters slightly. Nothing serious, just a combination of a WiFi handset and poor broadband being the likely offender.

The decks have been cleared for when the ACW 30mm collection arrives and in truth, the fourth quarter of this year will be something of an ACW fest as I am really keen to get some games in and to make a start on the ship models I am planning.

The two purchases you see above came from our preferred local boot sale and meant spending £1.50 for the two. My recent acquisition of Command and Colours: Medieval is set in the same time frame as Michael Wood's book although of course the warfare was very different. The Ariadne Objective features the personalities of the underground resistance to the German occupation on Crete during WW2. It looks good in an 'Ill Met by Moonlight' or 'Guns of Naverone' kind of way.
Posted by David Crook at 09:11

It was a pretty wild test match at Headingly, one of the best (why do the aussie's tend to lose these 'classic' games *sigh*). The Michael Woods book was my first volume on the era, must have been something good about it as I have a couple of shelves on the topic now. One day, I might even create those armies I've been promising myself...

It was mad and at the end of it I was left wondering why, oh why do we have to make things so difficult!?

I remember watching the BBC TV series and being haunted by much of it - it was a really atmospheric documentary. Glad to get a hardback version for the library and I reckon that GMT will cover the Western dark ages in an expansion for the Medieval game.

I have ideas for armies from the period but nothing tangible as yet.