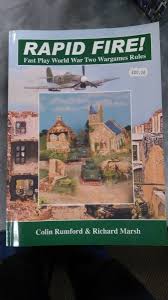 I have no way of knowing for sure but I believe that Eric used these rules for his WW2 games. Going by the unit organisations I have seen this would be a good shout. 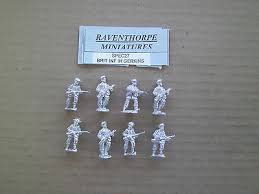 Not from Eric's collection but the above is indicative of the style of Raventhorpe figures.


I had a quick sort out of the three crates of figures from Bill which represent some of Eric's unpainted WW2 collection. In truth what there is could easily fill two crates but it is easier to keep the three for reasons that I will explain. I have a crate full of Japanese for the Burma campaign, a crate of late war Americans - many of which are in greatcoats - and a crate that has both Germans and Russians. Again, a lot of the Germans and Russians are sporting greatcoats.

In true Eric tradition the figures had been organised into units and my theory is that Rapid Fire were his rules of choice for the period as the unit organisations look very familiar. For the most part the Germans have been designated by Eric as fortress troops but there is no reason why they could not be used for anything else. There are plenty of infantry support weapons, HMG, LMGs, Mortars and infantry anti tank weaponry as well as command.

There is a smattering of Wargames Foundry figures but an awful lot of the collection appears to be from Raventhorpe Miniatures. I rather like these as they are true 20mm and have a basic charm about them.

I hope to finish sorting these out properly over the weekend so that the great disposal can begin - mercifully at this stage it will not be quite as onerous as the 18th century collection!
Posted by David Crook at 08:56