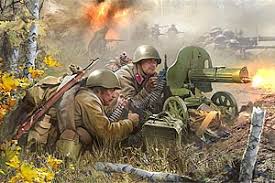 A Russian machine gun in action. I always liked the Airfix version of this.

Slightly later this week due to a couple of domestic commitments - nothing serious, just 'life' stuff.

I have sorted out the unpainted 20mm WW2 Germans and Russians from Eric's collection and will try and get some pictures up over the bank holiday weekend. As mentioned previously the Germans are in winter garb and the models have been organised into an Atlantic Wall Fortress formation. Based on Rapid Fire there is an infantry battalion with artillery and anti tank support (crews only) and a brace of ground mounted 20mm cannons.

The Russians have what Eric described as a Scout platoon of around hundred or so figures and around 150 infantry of various sorts including two calibres of mortar and that wonderful looking Maxim machine gun complete with a shield and wheels.

All of the WW2 figures are unpainted and I shall be looking to list these on eBay over the forthcoming bank holiday weekend. In the meantime though, should anyone have any questions about them or be interested in acquiring any of the models let me know.

Mention of Eric's collection (the 18th century this time) has reminded me that I can now happily report that all except for the smattering of Napoleonics are packed and ready to go to their new homes. I amusing a courier for these and the only time I can drop them off is at the weekends which makes for a minor delay but against the scale of the projects being planned would probably be small beer! It will be a relief to clear a big chunk of the loft floor, albeit temporarily! 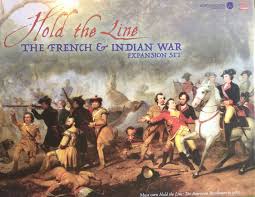 "If you go down to the woods today!" - watch out for the hordes of native Americans and their budget price haircuts!

My copy of the French and Indian War expansion for Hold the Line by Worthington Games arrived and so completes the 18th century American set up. The expansion includes additional rules and scenarios - including some more for the American Revolution featuring the French - as well as more terrain tiles. there are a hundred plastic 20mm figures including a complete French army, some more militia, woodland Indians and some Roger's Rangers. As mentioned previously it is possible to buy some Hessian Grenadiers and Highlanders from the Plastic Soldier Company so I may add these at some point. 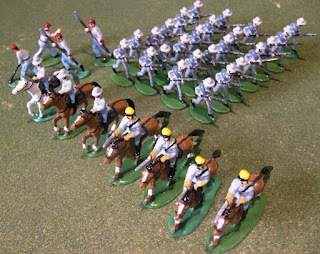 "There was a land of Cavaliers and Cotton Fields called the Old South... Here in this pretty world Gallantry took its last bow.. Here was the last ever to be seen of Knights and their Ladies Fair, of Master and Slave... Look for it only in books, for it is no more than a dream remembered. A Civilisation gone with the wind..."

The biggest news of the week though concerns my 30mm ACW Spencer Smith Kurz and Allison inspired toy soldier collection. The remaining figures have been completed and all being well will be in my hands over the next week or so. I am really excited about this and so the decks are being cleared to undertake the basing required and then I can get them into action. With this in mind I suspect that the forth quarter of the year will be very ACW facing so I had best get on with making some ships.

It looks as if a lot of individual projects are coming together. The 18th century America stuff sounds particularly interesting, even though it's not a period I've gamed much, and the 30mm ACW figures look stunning! I am very envious, and if I wasn't up to my ears in other projects, I'd be looking at doing something similar myself.

The current crop of 18th century stuff is very much in the nature of a short term solution to a long term project. In much the same way as Memoir '44 and Battle Cry are concerned using miniatures 'feels' like a 'proper' wargame in a way that counters or even, dare I say it, wooden blocks. the figures in the Hold the Line series are perfectly usable and certainly look the part. Longer term I may well look to Spencer Smith the figures element.

The 30mm ACW Spencer Smith collection will look fantastic once I get my hands on it and have completed the bases. I shall be posting a full review in due course and will also look to get some games in as a matter of some urgency. This will entail some other work around terrain etc but I am on the case with that.

Mention of the Airfix machine gun crew brought back many happy memories of said figures. I still have a look at the Plastic Soldier Review site now and then just wallow in a bit of nostalgia:).