Blocks in the Dark (Ages) 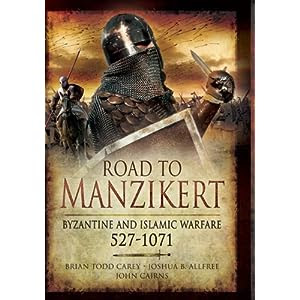 This ticks a number of boxes for me - although it will also create a degree of work as well!

A recent addition to my library is ‘Road to Manzikert – Byzantine and Islamic Warfare 527 to 1071’ by Brian Todd Carey, Joshua B. Allfree and John Cairns (published by Pen and Sword, ISBN 978-1-84884-215-1). I am very interested in this period of history in the Eastern Mediterranean and so was very keen to get a copy of this title – and I am certainly not disappointed! The book covers the armies of both the Byzantines and the Islamic forces of the Caliphates and how they evolved. It is complete with a very useful chronology of the period, a glossary of terms in use and accounts of a number of key actions fought during the era under review – culminating in the battle of Manzikert itself.

The thing that really caught my eye about this title though was the battle maps. Each of the actions described features maps of the battles at various stages of the fighting which is always a very useful thing in my opinion but that is not why I am so excited. There is a full page legend or map key which features the usual military symbols I have used for my block armies but also with a complete selection of ideas for the more usual troop types of the era – archers, slingers, javelins, horse archers and both heavy infantry and cavalry. Needless to say this has given me much to think about because making up some labels for the blocks for these other troop types would certainly serve to extend the usefulness of my existing collection and open up a whole new world of gaming opportunities.

I have an enormous selection of Command and Colours blocks for the Ancient period and so having a homemade set for use with the ‘Dark Age’ period armies will be a useful addition to my collection - especially as the era of the great Arab conquests has long been of interest to me.
Posted by David Crook at 15:25

Sounds interesting David, must admit, the late Roman/Byzantine is of interest to me increasingly. Looking forward to seeing how you develop the theme.
Regards,
Monty

I have a number of ideas for this but to be honest, they are a little way down the batting order. I would need to make the blocks in the first place although the rules would be easy enough to find or knock up!