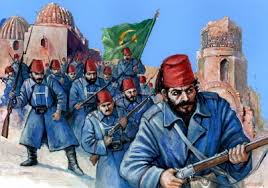 Now that the poll has closed the serious business of 'drilling down' into the war of 1877 can begin. The sources I possess are fairly modest; consisting as they do of the War in the East by Quintin Barry and the Osprey title covering the war. I also have some ebook histories including the work of Archibald Forbes which is a great read. Of course the internet will also be useful and for reasons that will become obvious the game at the end of all this research will look rather special. I will not go into details until a couple of experiments have taken place but if my plan works out OK then it will make a huge difference to the visual look of the action.

As far as the game itself is concerned I shall be using the hex based version of Bob Cordery's Big Battle Portable Wargame 19th century rules with a couple of very minor tweaks. I intend fighting an my usual 13 x 9 hexed playing area and of course, the action will be written up and recorded for posterity. At the moment though, the biggest issue I will have is finding an action to translate into a game that does not involve anything related to either the siege of Plevna or the numerous battles in the Shipka Pass!

Luckily there are a lot of other actions both great and small that could be worked into a game and that will be my main focus for the time being.

Did you get anywhere with this project? Im just starting up 15mm and 2mm armies for 1877, be intersted to hear what you found out regarding other battles .
rgds

Sadly no although I greatly enjoyed the research and fought a couple of games set during the war using my block armies.

I refought one of the actions set in Caucasus which went quite well.

All the best and good luck with your own efforts.