A Piece of Napoleonic History

The British DVD cover - I am waiting patiently for the UK Blue Ray version....

First of all I would like to extend my apologies to the redoubtable Mr. Fox for not posting this item sooner!

I cannot imagine that there is a Napoleonic, or indeed probably any wargamer that has not seen the film Waterloo - Waterloo. I can safely say that this film was very much the inspiration for my own Napoleonic adventure back in formative wargaming years and I still have a very soft spot for the film and the 1815 section of my library. I also have not forgotten my plans to refight the campaign using the block armies and (possibly) Volley and Bayonet, or even something entirely different. 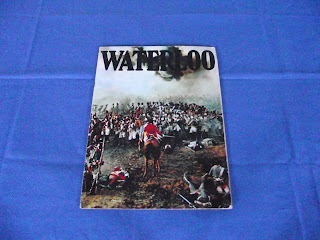 What a film - and with not a jot of CGI to be seen!

I was absolutely delighted to receive from the hand of Mr.Fox a couple of weeks ago a copy of the original cinema release program dated back to 1971 and chock full of large sized double page stills (in colour) from the film itself. Given my fondness for all things 1815 related this was a delightful gift to receive and so my grateful thanks are extended to Mr Fox for bringing some cheer to what has been a very trying few weeks.

As a postscript I was surprised and tantalised at the the prospect of seeing the full length version of this great film - it was rumoured to have been in the region of some four hours long when made but was only shown in its entirety in Russia.

One can but hope this version will made available at some point in the West!
Posted by David Crook at 14:59

I too heard about this 4 hour version, I would love to see it!

With the 200th anniversary coming up in 2015 one would hope that somebody would have thought about finding it for release!

It is a great film!

David,
A friend of mine who had traveled to Italy swears he saw it there in its full length format with Italian sub-titles. Would it not be wonderful if the four hour version would bwe located some day in a musty, old, government vault somewhere in Russia?
Jerry

That would be fantastic news indeed! Your friend was a lucky chap then - but I wonder then if copies are in Italy somewhere of this version?

One can only hope!

Sergei Bondarchuk was the greatest film maker, ever, for my money. "Waterloo" did not get many screenings here in Georgia, but I saw his epic vision of "War and Peace" when it was televised in the early 70's. I have played Napoleonic Russians ever since.

There are strong rumors that the "director's cut' of Waterloo is tied up by a number of lawsuits involving Bondarchuk's estate, and the various governments of the old Soviet Union, who claim ownership of the film as well. We may never see the footage, unfortunately. I was always hoping that it showed more of the Prussian involvement.

I read long ago, that while filming Waterloo, with all the Soviet military extras, that Sergei was commanding the seventh or eight largest army in the world at that time. There were not enough muskets to equip all of the extras, and in a few scenes, you can barely see the magazines on 1891 Moisin-nagant rifles.

Now I know what i will watch on Thanksgiving, in lieu of American football...
-Steve

I can never tire of watching this film and I really hope that all the legal obstacles can be overcome so that it is made available in all its glory once again.

According to Wiki (and obviously subject to confirmation as a result) the longer version covered Ligny in more detail.

Mention of the magazine armed rifles noe means I shall have to watch the film again - to see if I can see any! (a thin excuse I know!)