Saying hello to the Russians and Turks - what's not to like?

You may recall that I had taken the decision a while ago to dispose of my scratch built ACW collection of some 50 models - of which 18 were painted and based. I did this simply because I wanted to make use of a smaller scale of model for my riverine actions and that is now the plan going forward. The injection of funds received as a result of this disposal have been very wisely invested and I hope to take delivery in the next day or so the above title. 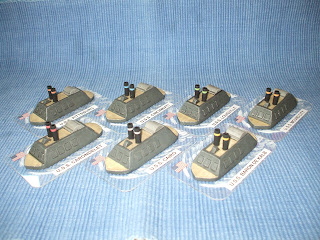 Waving goodbye to this little lot - and the 41 others.

When Russia declared war on the Ottoman Empire in April 1877, it was the fifth time during the nineteenth century that hostilities had broken out between the two empires. On this occasion the other Great Powers had done all they could to prevent it, although public opinion in the West had been shocked by Turkey's brutal repression of the Bulgarian uprising. The war was to be fought in two distinct theatres. In Europe, as on previous occasions, the Russian objective was to cross first the Danube and then the formidable Balkan Mountains before striking for Constantinople. In Asia, over territory also contested many times before, the Russians aimed to seize Kars and then Erzerum. At first all went well for the invaders, the Turks making no serious attempt to hold the line of the Danube, while a thrust south by General Gourko succeeded in crossing the Balkans by a pass not previously considered practicable. At Plevna, however, the Russian advance stalled in the face of the determined defence of the place by the redoubtable Osman Pasha. In Asia, meanwhile, after initial success, the Russian advance was halted by defeat at Zevin. Poor strategic judgment on the part of the Turks led to their failure to take advantage of the opportunity provided by Osman, even after the Russians had suffered three bloody defeats at Plevna. Eventually, after the town was closely invested, it fell to the besiegers. In Asia, the Turks suffered a major defeat in the battle of God's Mountain, and were driven back to Erzerum, while Kars fell to a brilliant assault by the Russian forces. These defeats marked the beginning of the end for the Turks. By January 1878 the Russians were over the Balkans in force, and the last viable Turkish army was surrounded and captured at Shenovo. Armistice negotiations led to a suspension of hostilities and to the treaty of San Stefano. The other Great Powers had watched the conflict with mounting anxiety and were determined to moderate the terms of San Stefano which had imposed harsh conditions on the Ottoman Empire. This, following tortuous diplomatic negotiations, they succeeded in doing at the Congress of Berlin in July 1878. This book, the first military history of the war in English for over a century, traces the course of the campaigns, examining the many occasions on which the outcome of a battle might have gone the other way, and the performance of the combatants, both leaders and led. The book considers the extent to which the parties applied the lessons of recent wars, as well as the conclusions that could be drawn from the experience of combat with the latest weapons. It also explores the complicated motives of the Great Powers in general, and Britain in particular, in bringing about a final settlement, which postponed the dissolution of the Ottoman Empire. The author's detailed text is accompanied by an extensive number of black and white illustrations, an impressive colour plate section containing reproductions of paintings by artists such as Vereshchagin, plus black and white and colour battle maps. Extensive orders of battle are also provided. This is the latest title in Helion's ground-breaking series of 19th Century studies, and will again appear in hardback as a strictly limited edition printing of 1,000 copies, each individually numbered and signed by the author on a decorative title page.

Acquiring this book is probably the easiest decision I have made in a long while and I am hoping to get a lot of ideas and inspiration from the same. Needless to say, anything I dream up will feature on the blog but in the meantime I shall look forward to this with relish!

PS
Now have a digital copy of those naval board games (including Jutland) you are a very bad influence, keep it up

Glad to be of help (although don't tell that to your good lady!).

Lots of ideas though.