Further thoughts on the Portable Wargame 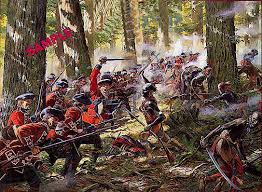 "Just tell me one thing....Are these chaps really the last of the Mohicans?"

I have used Bob Cordery's Portable Wargame rules for both 19th century and modern (WW2 in old school speak) games very successfully and will happily do so going forward. However, being an inveterate tinkerer I have a few ideas to throw into the mix. I am not alone in this as many other gamers have been experimenting with other periods - The English Civil War being one, with Steven Page being the driving force with his blog - Forlorn Hope ECW. For my own part (and much as I would love to tackle the ECW at some point) my immediate needs are far simpler, comprising as they are the 'musket' period (roughly 1700 to 1850) and perhaps some 'tribal' types to add in to the 19th century (and earlier as well). I also have some additional plans for the 'modern' set.

For the traditional 'musket' era my thoughts are fairly simple. I want to include unit formations in some fashion - the traditional 'column, line and square' that feature in many sets covering the period - and also to allow for skirmishers and light infantry. My plans are very much in their early stages with this but the key thing for me is to be able to represent such formations within an individual hex. Once I have some clarity around what I want to do and how I want to do it I will post to the blog in the usual fashion.

"Honestly Sahib, it was only used once a week by my grandmother to visit the local Fakir"

The 19th century will add in some Tribal types for the Colonial era and also for earlier so, for example, the French and Indian War could be gamed with its hordes of woodland Indians. Mention of Indians also raises the possibility of Clive and his exploits on the Indian sub continent as well as the later wars up to and including those campaigns of a certain rather well known British historical figure to boot....;-) 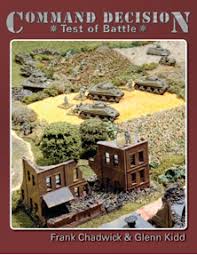 For the modern set the changes I want to try are probably more radical than for the earlier set. I want to be able to break units down so that for my current set up a single block is a strength point and that a hex has a stacking capacity expressed in strength points rather than units. This would enable, for example, a couple of blocks of infantry supported by a machine gun block to be represented. I am also toying with allowing individual blocks having their own combat dice rolls so that the aforementioned unit of two infantry and a single MG would roll 5 x d6 - 1 each for the two infantry and 3 for the machine gun. This would raise the spectre of assigning hits but there are various ways of getting around it with the simplest being to roll a d6 and count around. Failing that, (and is probably the simplest method) just assume that the hits are taken by the majority type first so the formation above would lose both infantry with the MG being the last man standing. I would also like to employ area effects for artillery (one could argue that possibly MGs should be so treated) and at the moment my thoughts are along the lines of if an artillery piece hits a hex then all strength points currently occupying the target hex are attacked. This would encourage players to spread out and avoid bunching which is perfectly accurate in my opinion.

Essentially my thoughts around the modern game are very much geared towards a lower level of action than the earlier set and are probably closer in intent to such rules as Command Decision where a base represents a platoon-sized formation.

All of this in very much in the early, experimental stage and naturally I will report via the blog as and when I have something concrete to convey.
Posted by David Crook at 09:13

I think that your ideas for a lower-level game will work ... but beware of falling into the trap of complexity. It is very easy to go down that route when one moves towards skirmish battles.

David, It looks like your modern thoughts are tackling one of the issues that has come up on my forlorn Hope blog. "What are we trying to model?" My ECW rules (at this point) are "grand tactical" in that a Unit is a couple of companies. I have had readers ask about he possibility of a Unit being both pike and shot, and others wanting the minute detail of different formations used by musketeers.

I think the Poeratble Wargame can support almost any level of tactical detail. I look forward to your efforts with modern "combined arms" and will post my results soon on a "large battle/small board" ECW game.
-Steve

I've thought about mixed "units" as well. Units as in occupants of a grid. My own inclination after thought would be to allow the player to choose where the hits go.

In the example given, a player might choose to shift resources etc to keep the MG's firing if defending but might sacrifice it to keep the infantry going if making an assault.

I will be treading very carefully with this indeed - especially when I tackle the 'modern' set. The ideas I have in mind should work but as we both know, there is 'many a slip 'twixt cup and lip' or something similar!

I will be cautious.

I shall look forward to seeing how you tackle the ECW - it is a period I have a hankering for - and who knows? It may even prompt me to think about how to 'block' the armies of the era.

I have a small section of my library devoted to the war and so dusting the books off for the inspiration for a game seems rather appealing!

Re the moderns - that would make a lot of sense - allowing freedom of choice - for the reasons you give and so I may well feature that. In my head the changes are actually fairly modest but I think they will add some additional flavour for the lower level game.

Hi David,
Am I missing something? I thought each unit was composed of multiple blocks, and the blocks were removed to indicate hits, ala Memoir 44/Battle Cry/C&C. If each block can now fire independently and take multiple hits, aren't you in effect making each block a unit, and stacking multiple units per hex? Then you will have to have a way of tracking hits on each block -- or split them into smaller blocks.

I am missing something - you stand them on end to track hits, right?
So how many hits does it take to eliminate one block?

All of these PW-esque discussions have piqued my interest more than anything has for years. Thanks for sharing your contributions.
Regards,
John

You are absolutely right and are certainly not missing anything! It comes down to (in my case anyway) how a unit looks and functions. I prefer to use the blocks in recognisable formations for an enhanced visual appeal. I am also a great fan of using the number of dice based on the size of the unit hence the proposed 'one dice per block' approach. The reason for this is purely because rolling a number of dice as opposed to a single just feels better as a game mechanic.

I will use a single block as, in effect, a single 'sub-unit' that will ordinarily operate as a unit in concert with the others within a hex - e.g. a 4 block infantry unit can ordinarily take four hits and under my proposed amendments will roll four dice. A single hit will destroy a block - upending them on the table helps with the pictures!

I hope that helps!

All the best and thanks for following,

Was that a wargaming butterfly of a rules set

Anybody out there got it and played it?

Like you I followed this up to CD3 but have never seen a set of version 4 let alone gamed it!

The organisation books were useful - as were the campaign guides.